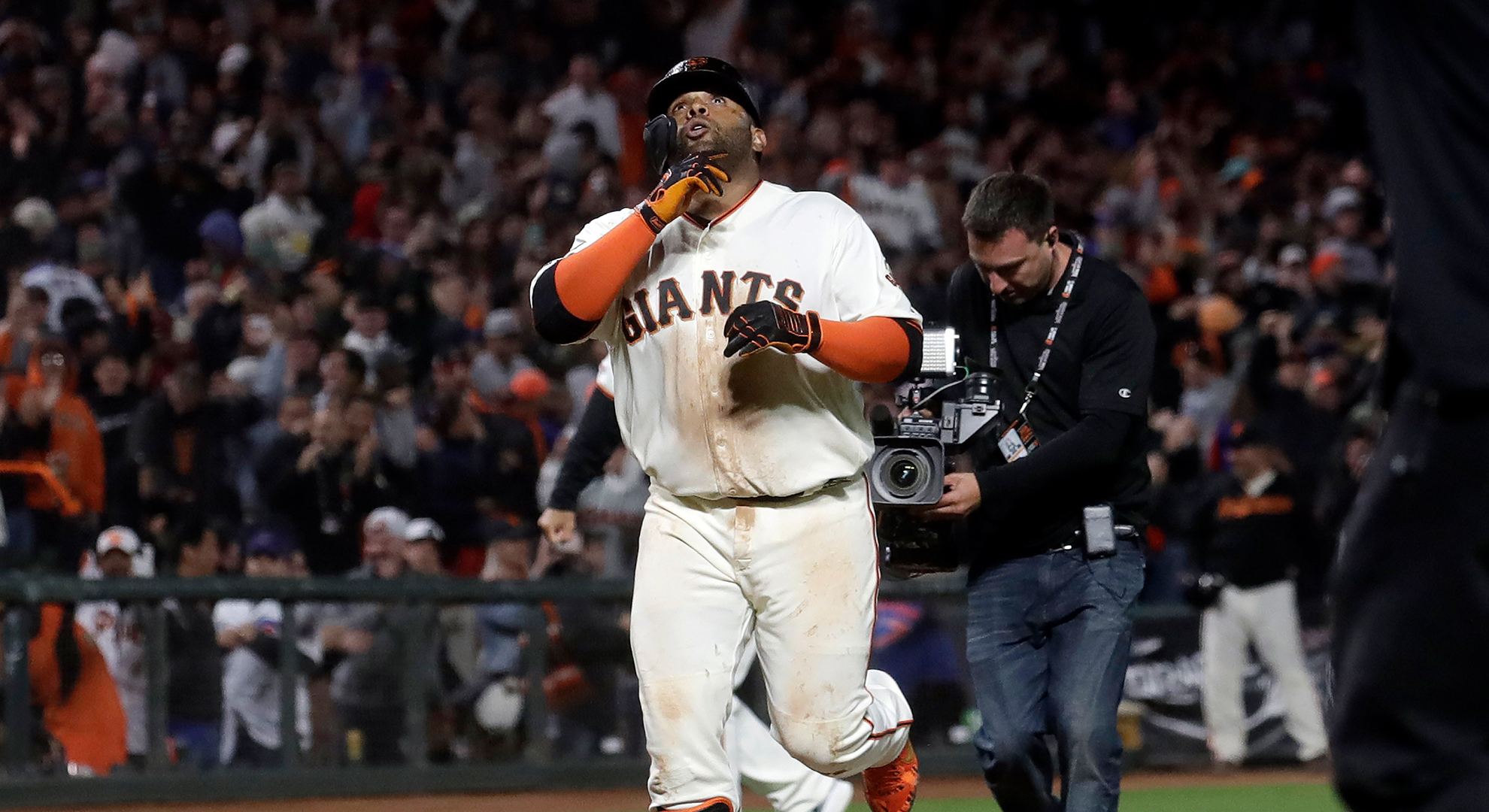 There were so many moments in last night’s game that could have turned the game either way. There were blown saves, seeing-eye base hits, home runs that weren’t, homers that were, hideous attempts at sacrifice bunts, and so forth.

This is just pure insanity!

The Giants are 10-2 in Extra Innings, also the best in the Majors!

When Kevin Pillar was stranded on second after hitting a lead-off double that looked like a homer but literally bounced off the top of padding in the left center field wall in the top of the 11th I assumed this game was not to be for the Giants.

When Madison Bumgarner gave up pesky singles that scored runs and was otherwise quite good, I felt a loss coming.

When the bullpen coughed up a 4-3 lead in the 8th I figured they were just gassed from all the stress innings and it was time for their excellence to give way to the physical and mental limitations of the past week.

When Pablo Sandoval hit into 23 double plays over the course of the game I was resigned to tell myself that it’s only one loss.

Then the Kung Fu Panda came to bat in the bottom of the 13th inning. He hit a line shot to left field that did not at first glance appear to have the trajectory to go the distance. The Panda felt otherwise, pimping it a bit in an exhausted display of relief as he watched the baseball sail just over the wall breaking the many hearts of the loud, obnoxious and downright rude Cubs fans annoying the hell out of us in our own yard.

This was a very satisfying victory, mostly because the bullpen was not perfect, the batting attack was mixed and the Ace was not at his best. When you can beat a team like the Cubs and take a series from them with your hottest hitter (Longoria) on the IL under these circumstances, then you are a good team.

The Giants are finding ways to win. The Giants are on a magical run of disciplined, committed and focused baseball that is combining all its unique elements into a cohesive and victorious display of teamwork at its finest.

The Giants are playing hungry!

Who are these guys? Where were they the last three years?

The short answer is this is not the same team. The young and new blood, from Alex Dickerson, who homered off a 97 MPH fastball from Yu Darvish to Kevin Pillar, Mike Yastrzemski and Sam Coonrod, a hero in relief last night, have all contributed to this fantastic run of winning, one that Madison Bumgarner calls the best he’s ever been a part of.

Something magical is happening at Willie Mays Field.

Screw the Wild Card! We want the division! Dodgers, here we come!