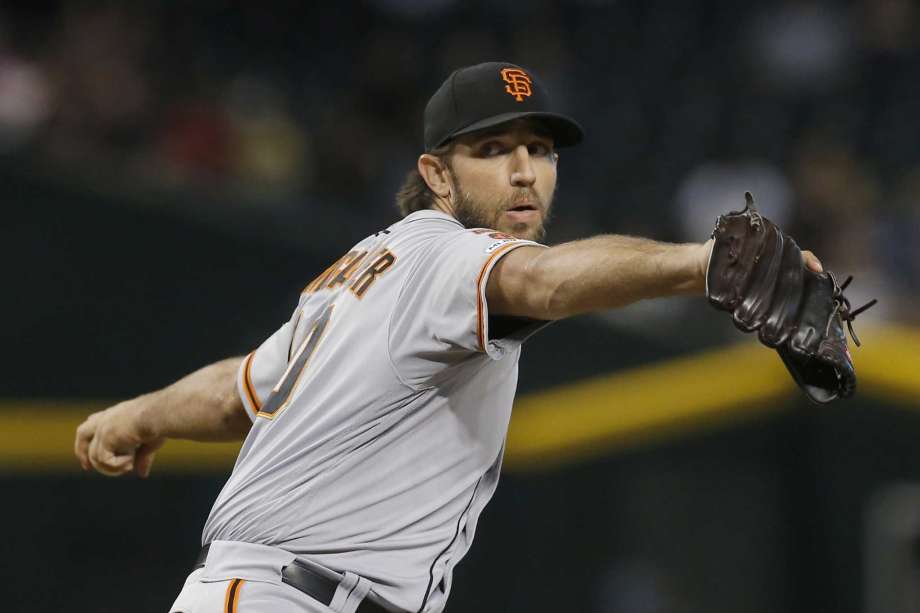 This was the type of game that makes armchair Giants Managers out of us all.

To begin with, Madison Bumgarner was cruising in the first inning when he recorded two outs on four pitches. It’s no secret that the giant Giant is prone to the first inning jitters just like I was when I pitched in Little League. When he got those two first outs I was hoping for a quick inning.

After the first two outs the next three batters went like this: double on an 0-2 pitch, double and error, walk, then the key at-bat of the game: after Bumgarner got ahead on Adam Jones 0-2 the former Oriole would work the count to 3-2 before lining a triple that scored two. He would then score on yet another two-out single.

Adam Jones’s triple came as a result of a diving effort by Kevin Pillar who raced in and dove in vain for the out and an attempt at preserving a scoreless first frame. He missed it badly and the ball rolled to the wall. The younger Adam Jones may have scored on an inside-the-parker on that play.

Second Guess #1: Was Pillar’s play a mistake? Was it over-aggression and not necessary in that circumstance?

I was ok with the attempt for the simple fact that Kevin Pillar is an aggressive outfielder who goes all out on every play. I love his game. I love his defense, even when it backfires. His aggressive play is a big part of his success as a player and a huge part of the strong outfield defense the Giants have displayed this season. Remember Denard Span? Remember Angel Pagan in center?

I love Kevin Pillar’s style because it demonstrates a terrific athleticism and commitment to making every pitch and every out count. If once-in-a-while we see a play like this, I can live with it. Was the play a bit foolhardy? Perhaps. Was it mis-judged by Pillar? Sure. Does he deserve nasty comments and criticisms for it? NO!

My take on the fateful first inning is that Madison Bumgarner had two chances to retire hitters on 0-2 counts and let both of them slip away. I am sure he would agree.

Second Guess #2: In the top of the sixth the Giants were rallying. A run was in and the game was 4-1 D-Backs with Brandon Crawford up and the bases loaded. Crawford, who is in the midst of his worst season as a Pro, would end up grounding out on a close play, a play that a speedier runner, perhaps a younger Crawford, may have beaten out. The discussion on the blog went thusly: Why didn’t Bochy pinch it for Crawford with Evan Longoria or even Alex Dickerson?

Here’s my answer: It was only the top of the sixth AND (this is a big “and”) Crawford is a veteran hitter who has shown streaky, freakishly streaky spurts of insane production where he carries a team. He is due to bust out with that big homer. We have all seen it many times.

You don’t pinch it for Crawford in the sixth inning, even if he is slumping, after all he has contributed to the Giants. Part of my reasoning is loyalty. Loyalty has a price and sometimes you just have to grin and bear it, pay the price and hope your loyalty pays dividends down the road. If Bochy pinch-hits Crawford there he may lose the team altogether, from a management perspective. It’s no hyperbole to suggest that despite Crawford’s diminished offensive production, he is still a key part of the team’s defensive and psychological make-up. You don’t treat him like a journeyman.

Let’s think of this game as the let-down after a great series that saw the Giants win three of four, vault past the Diamondbacks for second place in the division, and put up a great effort after a lackluster game against the A’s to end a fair home stand. I’ll take three of four any day and so will you dammit!