The Bumgarner and Pillar Show 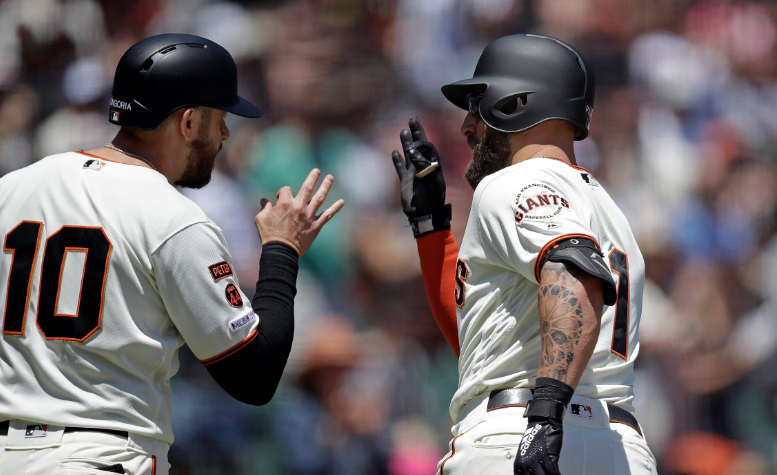 One of the most fascinating things about baseball is how narratives evolve over the course of a season. Hell, in two days, Kevin Pillar went from defensive disaster and goat to hitting superhero. Yesterday the Giant center fielder had a game for the ages at the plate, going 4-5 with five runs batted in, including a laser beam into the left field bleachers for a two-run homer on a first pitch fastball at the knees. That knock got the scoring started for the Giants and was an excellent example of laying in the weeds, a phrase used to suggest a hitter is ready to attack on the first pitch if he gets what he is looking for, in the location he desires. It was a great piece of hitting by an aggressive player.

To infinity… and beyond!
#SFGiants pic.twitter.com/pDZ8VL21KO

Kevin Pillar is that super athletic player whose defense is not quite elite and may have slipped a bit but whose speed, occasional power and ability to cover so vast an outfield makes him exciting to watch at the very least. We saw the misplay in Saturday night’s game. In yesterday’s Pillar lost a long fly ball on the warning track in the sun that fell for a double. He was wearing his glasses and it was the kind of ball that is usually caught.

It was a very Kevin Pillar kind of day: big hits, athleticism, the odd miscue.

Kevin Pillar has atoned. He is forgiven for the Saturday gaffe and he is now the Giants hero in residence, at least on the hitting side of things. At the rate he is going Mr. Pillar will lead the Giants in both RBIs and homers. With this team that’s not saying much but it is something, particularly when you get these contributions from an above average outfielder, a center fielder no less.

The Pillar acquisition has been the best move Zaidi has made to date and it is not even close.

The other star of the show yesterday was Madison Bumgarner. His line of seven innings pitched, four hits, one run, and nine strikeouts with zero walks was very impressive. Bum did not nibble much and was able to command his fastball and cutter very well for the most part. His stuff looks great and his composure and demeanor look even more impressive. Gone was the pitcher getting behind in the count or barking at umpires. This was vintage Bumgarner and if he truly is back, no amount of prospects would be worth losing the big fella. It may simply be time to sign him to an extension, make him a Giant for life and throw in free drinks at Wilson and Wilson while we are at it.

“You really appreciate what these guys can do, and that was vintage Bum. He was really good today.” —@BruceBochy on Madison Bumgarner’s quality start

Yesterday was the kind of game we were hoping to get more of. Buster Posey had three hits and Mike Yastrzemski also drove in a pair. It was a fun day at the yard and the Giants split the four-game series from the Dbacks, two games to one. The Giants also finished June with a winning record at 14-13.