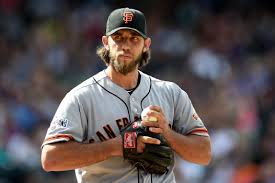 Since I wrote my post a week ago, the Giants have gone 3-2. That’s not bad, and it included the Giants’ first series sweep (OK, just two games, but it was a sweep and on the road), and the three wins pulled them to a .500 record on a tough three-city East Coast trip. Buster Posey started to hit and drive in runs again, Dereck Rodriguez won his third game and continues to show that his fine rookie season was no fluke, Drew Pomeranz had his best start as a Giant in a combined shutout win in Toronto on Wednesday, and the Giants continued to play some great defense.

That’s the good news, such as it is.

The bad news is that the Giants are 11-15, in last place in the NL West, and their offensive stats are still beyond dreadful even after an incrementally better week overall. The team batting average is .210, which puts them 29th in the majors, just slightly ahead of the Cincinnati Reds. They’re not under the Mendoza Line at the moment, but they’re not far above it, either.

Also troubling is the continued poor performance of Madison Bumgarner. Last night he gave up 11 hits and five runs in five innings, and the 11 hits allowed tied for his worst outing in his career. His 4.30 ERA after six starts is a full point above his career average. Though he’s still tough on lefties (holding them to a .154 batting average), righty hitters are batting .282 against him. In postgame remarks, Bum talked about too many “hittable” pitches, and manager Bruce Bochy said that he was “a touch off with his command,” which is a polite way of saying that Bum was throwing meatballs that got hit hard.

Andrew Baggarly’s piece in The Athletic is diplomatic. He points out that Bum has had slow starts before, including in 2014, which ended up with a historic October, and also that how Bum looks in July is more important than how he looks in April with regard to his possible trade value. At the same time, he invokes all the other great Giants pitchers who have broken our hearts as we watched their decline in real time, comparing them to a “beloved spaniel,” and…let’s just say it doesn’t end well for the spaniel.

There is something so irrepressibly sad about the beloved spaniel when she no longer runs, no longer fetches, when every day draws you nearer to a decision that is as dreadful as it is unavoidable. The last thing anyone wants is to live through that process again. The last thing anyone at 24 Willie Mays Plaza wants to see is the mighty Bumgarner go out with a whimper.

OK, now I’m back in the final days of Winnie the Pooch, and I’m going to need a moment.

Some good moments on defense

There were two memorable spots in last night’s game regarding Steven Duggar. In the first inning, he tripped over the bullpen mound in right field while chasing a foul pop-up and jamming his left wrist, which he was seen icing after the game. That could have been really bad for him, and it was bad for Bumgarner, since the ball wasn’t caught (it probably would have been if Duggar hadn’t tripped) and Gleyber Torres hit an RBI double on the next pitch and later scored.  In the fifth inning, though, Duggar fired a throw to third to double up Torres, trying to tag up on a fly ball. It wasn’t even close at third.

With the Sharks and Warriors both in playoff games last night, most of us had likely switched channels by the time Brandon Crawford did this in the top of the ninth. Crawford is about as lost at the plate as I have seen him since early in his career, but he’s still bringing it defensively, Pizookie weight notwithstanding. Fangraphs metrics have him as the best defensive shortstop in the NL so far.

Brandon Crawford with a no-look pass for the out. pic.twitter.com/REVshvxAnT

You will notice that there are no defensive highlights of Brandon Belt playing left field last night. That lineup decision was a head-scratcher. Teams are loading up on righties against Bumgarner, and those hitters are pulling the ball. Belt’s general ineptitude out there hurt Bum and the Giants last night. That’s not surprising, since no one’s ever accused Belt of being a great outfielder (his “Baby Giraffe” nickname didn’t come from how he plays first base), but what was surprising was that Bochy double-switched Belt out of the game later, moved Tyler Austin to left field, and put Pablo Sandoval at first base. So…if Austin was physically able to play left field, which he clearly was, why wasn’t he there to begin with?

That said, Austin had a good night at the plate and scored two runs, so one way or another, it’s probably a good idea to get him more at-bats.

Where do the Giants go from here?

The situation with Bumgarner is what it is. Either he’ll pitch better and maybe be traded or he’ll pitch OK, not be traded, and we’ll see what happens after the season. The scenarios aren’t especially complicated.

In some ways, the Giants’ overall picture is a bit murkier. Yes, this is a last-place team, and yes, there are a lot of similarities to the bad teams of 2017 and 2018, but…in other ways, they’re intriguing. They have one of the best pitching staffs in the majors, the best bullpen, and the best defense. This is not a team with nothing whatsoever going for it, compared to, say, the 2017 team, where really nothing went right.

So if you’re the Giants’ front office, do you go with the “still a bad team” picture and work intentionally on trading every piece with value so that you can build for the future? Or do you go with “really good pitching/defense and just needs a little help” picture?  For the latter option, we had this tidbit from Ken Rosenthal yesterday.

#SFGiants in active trade discussions for an outfielder, sources tell The Athletic. Talking to multiple clubs as Tyler Austin continues to deal with inflammation in his right elbow.

I think the answer is…we don’t know yet. Today is April 27, and though the Giants are in last place and the closest they’ve come to sniffing .500 this year was 0-1 and 1-2 during their first series at Petco, they’re not buried and there’s a lot of baseball yet to be played. And there have been some signs of life at the plate from core players such as Buster Posey and Evan Longoria.

Holland’s had a week to stew on his hard-luck loss in Pittsburgh last Saturday (though he did get awarded a “complete game” when the game was called after five innings).  We’ll see if he can do better against the Yankees’ right-handed lineup than Bum did last night. And with another lefty going for the Yankees today, we will likely see Austin again somewhere in the lineup and Panik benched again.

The Giants have this home series against the Yankees this weekend and then the Dodgers coming in for three (but hey–they’re actually going to miss Kershaw!). We’ll see more this week about how things are going to unfold for the enigmatic 2019 Giants (not to mention the irritating Golden State Warriors and the inspiring San Jose Sharks). It will be a busy week for everyone’s remote controls.

Have a good one. Lefty out.