Celebrating the Return of Hunter Pence 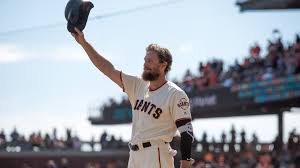 Ok, let me get this out of the way since this first season under the new Farhan Zaidi regime is obviously year one of a complete and total rebuild (manager, GM, farm system, Major League roster, scouting, etc). Let us just call it FZ1 for simplicity. You will notice I did not use the term “tank” anywhere in my description. I prefer to maintain an upbeat attitude in light of the start of Spring Training and Dr. Lefty’s lovely optimistic post from Saturday.

Yesterday Hunter Pence arrived in camp and was greeted with cheers throughout the park. Those cheers and accompanying applause were noticed by new Giants Manager Gabe Kapler. One wonders if the Pence and Panda signings are part of Zaidi’s master psychological warfare strategy to give Giants fans something to cling to as they watch their team descend into a 100-loss seasonal abyss…

Here is a nice quote by Full Throttle about his return:

”It’s great,” Pence said. ”It’s extremely exciting for me to be back. It’s definitely fun with a lot of new faces and a lot of new staff. I’m just thrilled to be back, thrilled to see the fans, every day getting to do something I love to do so much, obviously. Especially with how things went – it’s part of the game, the nature of the game – I really appreciate every bit of it, every little thing. It’s a joy to be a part of. It’s definitely special to wear the black and orange. I’ve been here so long.”

It will be interesting to see how the season plays out for the eternally young and soon-to-be 37 years young Hunter Pence. The smart money is on Pence being a better than replacement level player in 2020. Pence signed a $3 million, one-year contract with potential earnings of l $2.5 million in various roster and performance bonuses.

It is safe to say Pence was added to provide a veteran presence and tutor the young Giants as they prepare for their careers in the Major Leagues. With Buster and Pence, the Giants have two veteran World Series heroes to lead the way for players like Mauricio Dubon, Joey Bart and other prospects.

Personally, I like the Pence move since it will have a negligible effect on the Giants overall payroll picture and, as I stated earlier, watching Pence hustle out of the box and run crashing into walls is sure to give us those warm fuzzy championship memories that will add a bit more to our applause and cheers in what is most likely going to be a rugged season of baseballing for the San Franciscans.