Classic Games: Angel Pagan’s Heroics Give Giants a Victory Over Rockies in the Greatest Ending to a Baseball Game EVER! 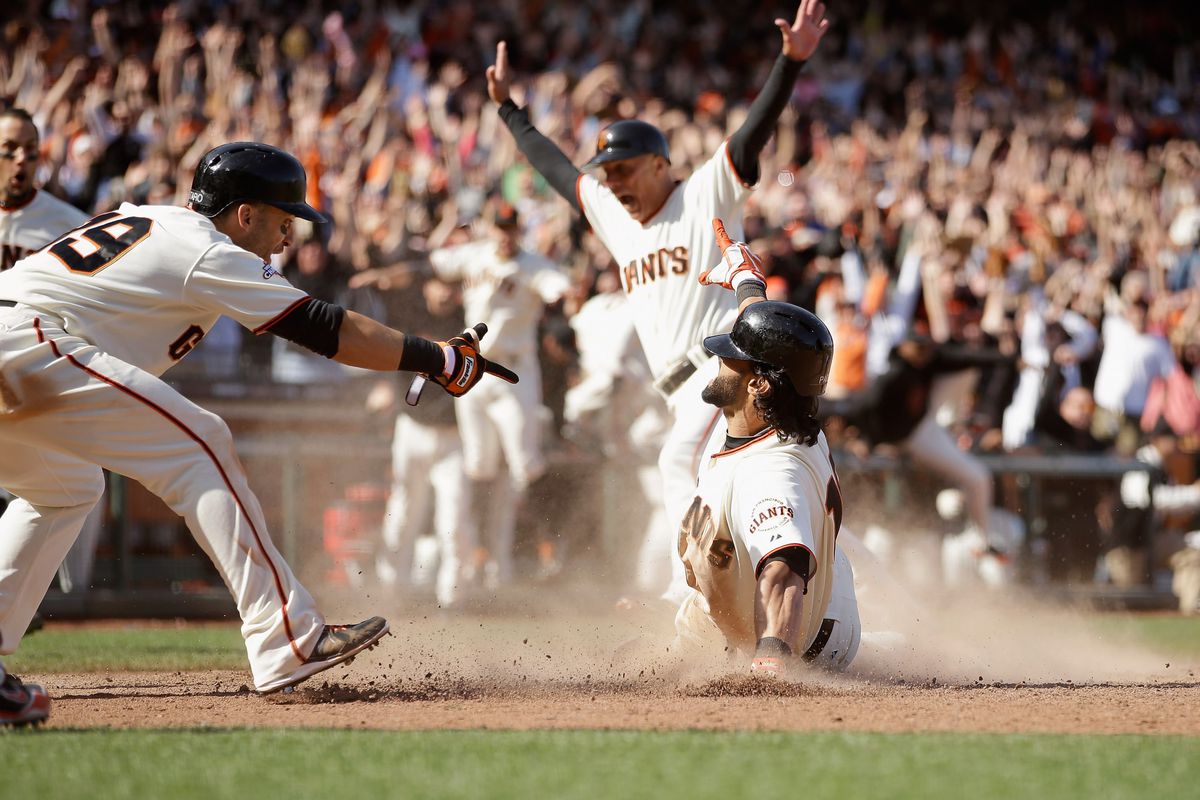 I remember this game. It was in May of 2013 and the Giants were flying high, in first place and poised to defend their 2012 World Series crown.Sergio Romo gave up a run in the tenth. In the bottom of the tenth this happened:

It was the most exciting ending to a ballgame I have ever seen. The photos of this play are precious. Notice Marco Scutaro on deck. Notice Tim Flannery running like a crazy person signalling “SAAAAAAAFE.”

The Giants won the game 6-5 in ten innings. There was one out with one on when Pagan did his thing. In the game Buster had three hits and Barry Zito started, going five innings and allowing four runs.

After this win the Giants were in first place. Then everything came crashing down. Matt Cain was not Matt Cain anymore. Same goes for Tim Lincecum. Pagan would re-injure his hamstring on this play and never be the same. The Giants seasons would collapse like a soggy pizza box and 2013 ended in resolute misery.

But on this day, all was glorious. Pagan had set a Giants record with 13 triples in 2012. His homer in this game was made possible because of a strange and crazy convergence of events. Pagan hit the ball more than 400 feet. It took a weird carom of the bricks of Triples Alley into no-Rockies-land. Pagan was motoring and motoring and motoring. Flannery, ever the risk taker, sent Pagan home. He would have been out with a decent throw. Instead the relay from shallow center by D. J. LeMahieu was a 10-hopper and the crowd at Willie Mays Field went wild!

Andres Torres was excited to celebrate:

Pagan on this photo: “Andres almost beat me to the plate. He almost slid in ahead of me.” pic.twitter.com/rPgdJjMFSj

The years go by quickly and it is easy to forget but in 2012 and 2013 Angel Pagan was the sparkplug in the Giants offense. He had some pop and speed to go along with his ability to drive in big runs. There was a three-run blast with two outs in the top of the ninth with the Giants down two in Cincy. There were heroics in the 2012 postseason as well. Angel Pagan was the anti-Metrics ballplayer in many ways, though he was 4.2 WAR in 2012.