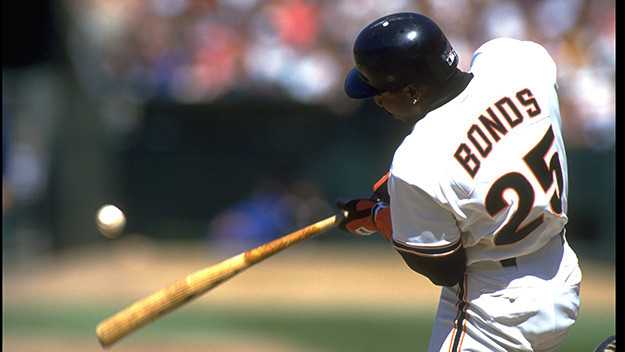 Do you remember where you were on April 12, 1993? This was the day the Giants returned to Candlestick for their home opener with a new kid playing left field. His name is Barry Bonds and he, along with Peter Magowan, was the savior of the franchise. At the end of the 1992 campaign it looked very likely that the San Francisco baseballers were moving to St. Petersburg, Florida.

The aforementioned Magowan swooped in to buy the team and orchestrate arguably the greatest free agent signing in San Francisco history. The rest is… well you know.

On that beautiful day Barry went deep and the Giants beat the Marlins in 11 innings. It was a hell of a way to start the Barry Bonds era. Notice who is the first base coach. Barry went 2 for 3. Darren Lewis had the winning hit in the bottom of the 11th, a single.

I remember I was working that day. I remember listening to the game on the radio and hearing the crowd go nuts when Bonds hit his first homer as a Giant in front of the hometown fans. It was a very exciting time. That day felt like a salvation and a celebration all at once.

Rod Beck got the win. There were 56,689 in attendance. This would be the first of many exciting wins at home in what was one of the most beautiful and frustrating seaons in that saw the Giants win 103 only to finish one game behind the Braves for the NL West title.

To save the earth. 🌎 pic.twitter.com/xHK0UqAZ4q