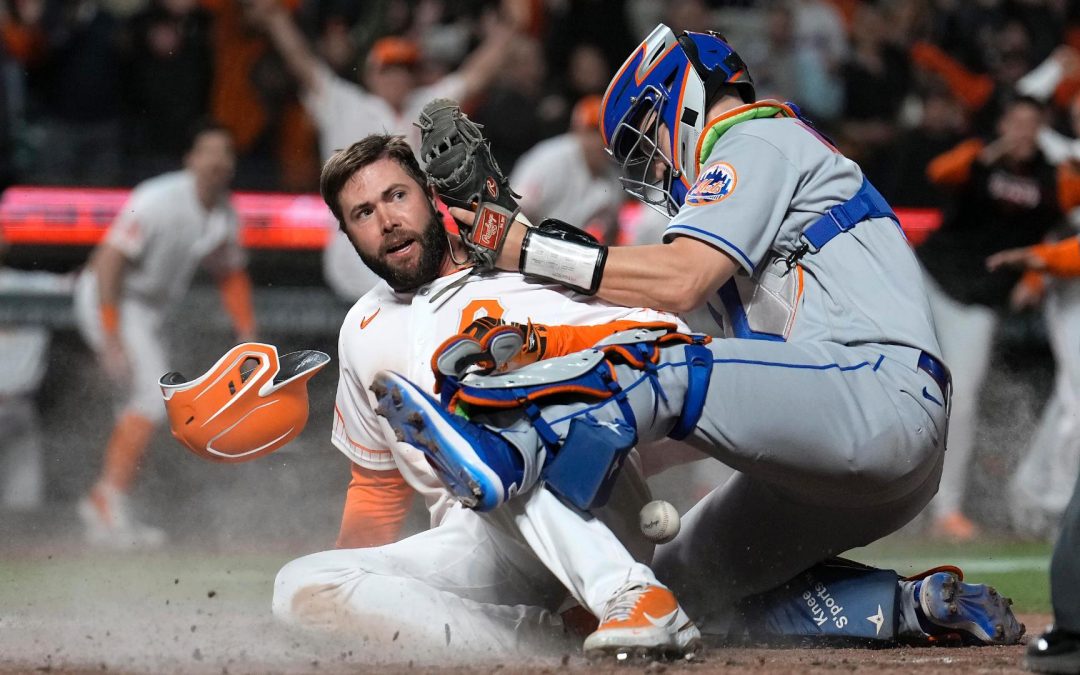 I’m exhausted and I only caught the bottom of the ninth. This was one of the rare mornings when I awoke early (7:30 AM) and was able to watch the Giants game in real time. Boy oh boy….

This is a game we will never forget!

Starting the Bottom of the 7th inning Dave Fleming said “The Giants have to be stunned with the way this game has unfolded..” Stunned and Un-stunned indeed.

Where do I start?

Wow! In their entire history the Mets have never lost a game when they scored 12 or more runs, until tonight. Yes, that’s correct! The Giants won 13-12 after rallying with two outs and nobody on in the bottom of the ninth. That inning alone was crazy. Brandon Crawford singled home the Darrin “Ramblin” Ruf to take the game. One batter before that Joc Pederson tied the game with a single up the middle with the Giants facing another ugly loss.

Wilmer Flores led off the bottom of the ninth with a single but he was erased on a double play by Tommy LaStella. The key at bat of the inning, and maybe the game, was Mike Yastrzemski’s following LaStella’s double play. He would work out a walk to give the Giants some life. Darrin Ruf followed with a single to right field in an example of excellent opposite field hitting. Then Joc Pederson lined his single to center to score Yaz easily. With one strike Brandon Crawford hit a routine ground ball to short that would end up being the game-winner since the Mets had the shift on. In two consecutive at bats the Giants tied and won the game by hitting the other way and beating the shift.

By the way, did I mention the Giants did all this off Mets closer and flame-thrower extraordinaire Edwin Diaz?

There were offensive stars all night for the Giants. Luis Gonzalez had three more hits and continues to look like a gamer who belongs in the Bigs.

Here is the game-winner by Brandon Crawford (Note the Ruf slide):

Joc JUMPED on it 👋 pic.twitter.com/F3apXz9XrV

It’s Nice to be mentioned in the Giants Twitter page. I’m flattered:

After the win the Giants now have a team ERA of 4.46, good for tenth in the National League. In other words, that’s not very good. They are also tenth in strikeouts per nine innings. They are also one of two teams without a shutout yet this season. But the key issue for me is the lack of length in the appearances of the starting pitchers. Those standard 5 or 5 plus innings outings by the starters is simply taking too much a toll on the Giants middle relief corps and helps explain the bloated ERAs, particularly of late, of pitchers like Tyler Rogers (7.41), Mauricio Llovera (6.75), Zack Littel (6.32), and Jose Alvarez (4.35).

In the last three games the Giants pitching staff has allowed 10, 15, and 12 runs.

This is not good folks.

Mr. Rogers’ seven-run outing was, it’s safe to say, sublime nightmare. There were many hard hit balls and man groundballs that were not turned into outs. The combination of Bad luck, Bad defense on the infield, and Bad pitches made an 8-4 Giants lead turn into an 11-8 deficit. It was, as Jon Miller said “A shocking turn of events.” Again, Rogers is having a hellish season so far. He is not missing bats and his team is not playing well behind him. He is not himself but in his defense, the Giants again (misplays at third on a hard hit ball, a dropped throw by Ruf, etc.) failed to make plays necessary to save the inning from going crazy.

Logan Webb pitched five innings allowing only two runs to a hot and potent Mets line up. He was effective moving his slider in and out. He recorded six strikeouts on only one walk. He was solid overall. The one problem on the night, however, was how many pitches the Mets made him throw (92). That’s too many for a five-inning outing but credit the New Yorkers for many tough at bats fouling off pitches and going deep into counts. With this game Logan Webb extended his unbeaten streak at home to 18 starts.

It’s worth writing this again: Joc Pederson went 4-6 with three no-doubter home runs and drove in eight runs, both career highs. He is only the second player ever to hit a splash home run in Willie Mays Field as a Giant and as a visitor. The other was Ryan Klesko. Pederson’s ability to turn on high heat and inside heat is very impressive. After coming into the game struggling mightily, going 4 – 46 in the Month of May, it’s safe to say he broke out of his slump. It’s also safe to say he is the Giants MVP at this point of the season.

All three homers came with men on, the first Giant to do that since Willie Mays hit four homers in a game in Milwaukee in 1961.

Before the Game Joc Pederson credited a long and fruitful conversation with Barry Bonds for helping him clarify his approach to the plate.

Even when he is not playing Barry helps the Giants!

By the way, Joc’s three-homer game in San Francisco was the first by a Giant since the Kung Fu Panda’s magical night in Game 1 of the 2012 World Series. The series wraps up with a Wednesday afternoon contest beginning at 12:45 PM. Edwin Diaz is scheduled to start for the Mets against Jakob Junis.