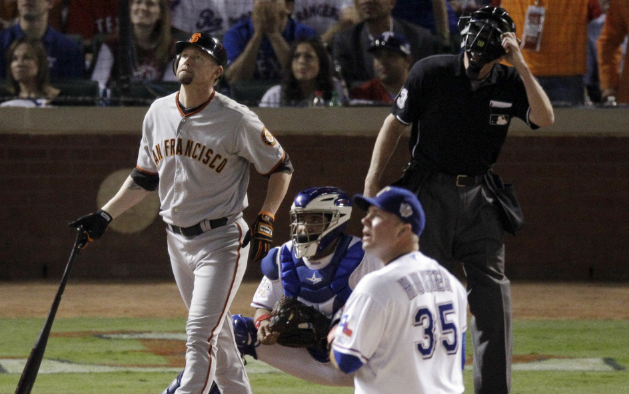 This was one of my favorite moments in the 2010 World Series. The Giants had taken Games 1 and 2 in San Francisco. The Series moved to Arlington where the Giants would lose game 3. Suddenly Giants nation was nervous. What if that two game lead were erased as quickly as it arrived?

We had good reason to be nervous going into game 4: a rookie named Madison Bumgarner was going to pitch in his first World Series, on the road against the might Rangers no less! Still traumatized by game 6 in 2002, Giants fans were beginning to let those creepy doubts enter into their heads. It turns out fate and Aubrey Huff were on our side this time around, Thank Mays!

Game 4 was scoreless till the top of the third inning when 2010 Giants MPV Aubrey Huff stepped up to the plate with a man on:

That was a tape-measure blast my friends! It was crushed. Some argue it was a cut fastball. Watching the video again, it appears the pitch was a slider that did not slide… Huff managed to get inside the pitch with power and keep it fair.

Aubrey Huff will forever be a here to Giants fans everywhere for the rally thong, this home run, and his excellent 2010 season. He was the perfect veteran compliment to a team full of young and inexperienced talent exemplified by the likes of Buster and Timmy, Panda and Madbum.

The veteran – youth blend on the 2010 team was perfect and an elemental component of the team’s first championship in San Francisco. Huff’s game 4 home run gave the Giants a lead they would never relinquish in what was one of the most important games of the series.