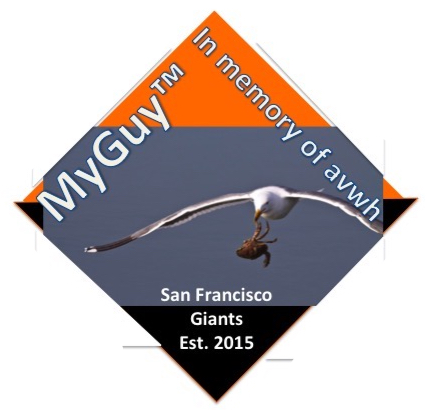 TWG has a great tradition of being more than emotional rants at every losing streak, late inning collapse or team decision that goes bad. We comment and interact for the Long Haul. We do this because that is how we display one of the great qualities of baseball: patient hard work.

Years ago some faithful members here began to get us all thinking of the quality of Patient Hard Work by aiming our focus to The Prospects: “VegasFan”, “avwh” and others.

“avwh” suddenly died while on his annual bird count on a December day. He took the picture of the seagull and crab that we used on the button. He was a veteran of Fantasy Camp and had the jersey to prove it.

“Foothills Ryan”, who has morphed into “Skitzo Ryan”, helped us too. He would bring up Joe Schlabotnik, whom SFG could have drafted, always calling him “MyGuy”. But it was a different Joe each morning as some of us just chased the new shiny object. It is the virus of Failure to Commit. This is a sickness and MyGuy™ is the cure.

Three Reasons to Join in on MyGuy2021™

Find Frustration Relief
No matter how bad things get on the MLB level, you will have eight young guys to look at instead. One of them will Ease Your Pain.

Have a Future Re-Focus

Staying strong at your Patient Hard Work always requires hope that things will get better. This is not pie-in-the-sky but Trusting the Process that If You Build It He Will Come.

Enjoy the Reward of Being On-The-Record
When August rolls around some unheralded prospect will be the talk of the town.  Think Panik and Duffy. Many here will claim they always knew he was good. But only those who filled out their MyGuy™ ballot have valid bragging rights to say, “He was MyGuy from the beginning.”

Pick Eight. Name one Position Player and one Pitcher from each Minor League team in the Giants’ system you think will be the best on their team this year.
Eugene, San Jose, Richmond, Sacramento

“Longshot Bonus” … If you pick a player who is outside the Giants Top Ten Prospect list you get a 25% bonus on him. Top Ten List: Luciano, Bart, Ramos, Bishop, Corry, Bailey, Matos, Harrison, Canario, Toribio

Extended Deadline is Sunday, June 6 so you can experience a TWG tradition this year.

* Duplication is allowed (others can also pick ‘YourGuy™’)

* Submit an “Early Ballot” [Before June 2] means you get credit if one of your guys happens to
get promoted pre-June 2.

Want even more details or have questions?
Write me at: My SF Giant Guy at Gee Mel dOtt calm