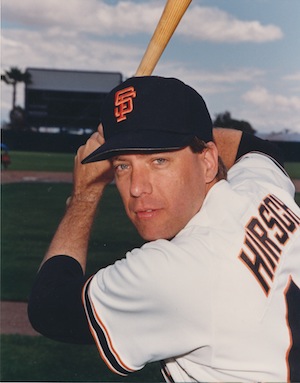 You can’t miss all the chatter on how rich the Giants’ farm system is right now. Plus, we have some early season tastes of Bart and Ramos showing they have arrived. But, as they say, “It is about the Journey, not just the Destination.” Of all the major sports, Baseball has the longest journey. Let’s enjoy the journey with these guys that we just may one day cheer.

You could miss that powerful journey, but we are here to help.

Only 12 years ago a top prospect catcher showed up and bumped a veteran catcher out of his way. Who could foresee that he would lead the Giants to three World Series wins in five years? So, you see, it happens.

For years we have had comments from our blog members that point us to these prospects on the Journey. They would track minor leaguers, make comments, whet our appetites and challenge us to look deeper. Some may recall VegasGiantsFan, Carmot and avwh. It was “avwh,” Allen Hirsch, for whom we named our avwhMyGuyButton™ as he ended his own earthly journey too soon. DrLefty gave him a wonderful tribute right here. The picture above is of Allen at Giants Fantasy Camp one year. Now it is your turn to take a shot.

The Tevister has built an all-new ballot you will love. It lists each prospect on their current minor league Giants team. They are split into position players and pitchers on each team. You just check a box next to YourGuy™ in each category. You scout four teams, pick two from each team for eight total players. At the end of the year they will be scored on how much they improved this year. “Improved” is the key word. That means any player can be a winner. In fact, it is more likely that a player that fell off the radar, will be a top MyGuy™ pick.

You can be full-on, cut-throat and go only on numbers for your vote.
There is a catcher who jumped two levels from last year. He can make a good Improvement with just an average year at this harder level as each promotion gets a 25% bonus.

You can read up on a player and go with the one with the best “journey” story. I am partial to Central American players so Ismael Munguia from Nicaragua will be MyGuy™ for the third year. I do this even though his wRC+ of 130 last year will be hard to improve on.

Pick the guys who have a name you like. I have a son named Seth so I am sticking with Seth Corry even though he sunk me last year. The upside this year is, he has lots of room to Improve.

You can enter the contest by clicking on this link here.

You can change your vote all the way up to Willie Mays’ birthday, May 6 at midnight WMFT (PDT).

They are not all “Buster Poseys,” but look at these past winners and the current MLB players (in bold) who helped them win.

Questions are best sent to my email: MySFGiantGuy@gmail.com