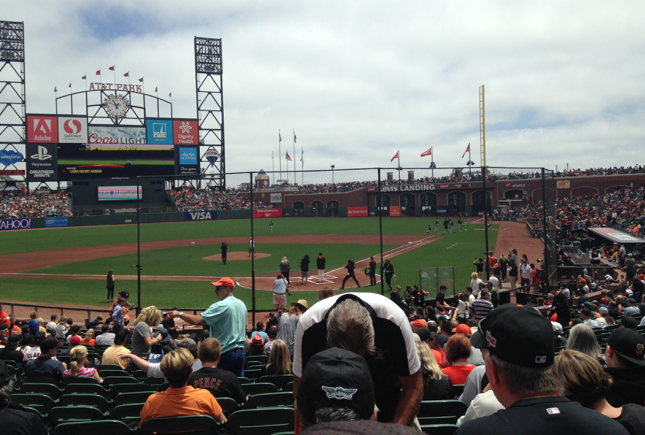 It was the evening of Sunday, April 10, when I got the text from Brownie:

Have you heard from Allen?

A shock instantly ran through my system. Allen’s absence from the Giants Extra blog had been mentioned a couple times over the months, but most of us hadn’t given it much thought. After all, Allen was known to take extended trips abroad, and many regulars take a break from the blog over the offseason.

But then I realized: spring training has come and gone. We’re almost a week into the new season, and the home opener already happened—and Allen’s a season ticket holder and surely would have been there. Something’s wrong. It took me just a few seconds on Google to figure out the truth, and I texted Brownie back: I have some very sad news…

And then I had to share it with you all on GE, and as hard as that was for all of us, the amazing outpouring of affection and respect that night and into the next few days was a tribute for which any of us would be profoundly grateful when our time comes.

I didn’t know Allen well, and I won’t repeat all of the salient details published in this well-written obituary, so I’ll just reflect upon my brief acquaintance with him, how I/we experienced him as a devoted blog regular, and what the news of his passing—and the response to it on GE–evoked for me.

I spent time with Allen twice, at two games less than a week apart in July 2015. The first time was at an A’s/Giants game on Saturday, July 25, Hunter Pence Gnome Giveaway Day. Allen had wonderful season tickets in Section 118, Rows 23-24, and my husband and I bought two tickets from him to see the game that day (and watch it with him). We got there early to be sure and get our gnomes, had a Bloody Mary at the CF garden bar, and then met up with Allen shortly before game time at the seats. He was not in a happy mood, having had his car broken into and his photography equipment stolen at the game the night before (he’d shared this on the blog that morning). But we still enjoyed a great game, with Bumgarner pitching seven great innings and hitting a homer and Casilla providing some torture at the end. I thought Allen, in person, was just like he seemed on the blog—funny, knowledgeable, blunt. We enjoyed talking to him. I took a couple photos that day; this one shows how great the seats were.

Less than a week later, on Friday July 31, a bunch of us gathered at Raley Field in Sacramento to watch the River Cats play and have a GE outing. Our group included Brownie, Appalled7, Bleacher Bob and his mom Quilter, Mr. Lefty and me, Mooooooooooose and a couple of his kids—and Allen, taking lots of pictures (with his backup equipment, I guess). We had a great time—Appalled7’s Guy™ Kelby Tomlinson stood out, and Josh Osich came into a bases-loaded, none out situation in the eighth and struck out the side and stranded all the runners. A few days later, both guys had been called up to the Giants for the duration. I didn’t take any pictures of our group at that game, sadly, and Allen didn’t post any of his, but here’s a shot from a different game that shows where our seats at Raley Field were. We’re about 13 rows behind the River Cats’ dugout on the 3B side, and you can see the Tower Bridge and Sacramento skyline from the seats.

Raley Field: Matt Cain walking to the mound during a rehab start

Just a few months later, Allen was suddenly gone, and it was weird for me to realize he’d been gone nearly four months before we all knew it. I experienced grief kind of backwards. When I heard he’d died suddenly on December 20—camera in hand, on a photo shoot with his beloved Audobon Society—I thought about how hard Christmas had to have been for his family. Just a couple weeks before he died, Allen shared on the blog that his wife, not typically a sports fan, had gotten so hooked on the Warriors that she’d agreed to plan their Christmas Day family festivities around watching the Cavaliers-Warriors game on TV.

I didn’t know Allen’s wife Sara or their two 20-something sons, but I remember Allen proudly sharing a year or so earlier when the younger one graduated from UCSD. My own father died suddenly at only 61, and two friends’ husbands died in recent years at ages 60 and 62. So even though I don’t know the family, I’ve seen and felt the pain of young adults knowing that their dad wouldn’t be there for the weddings or the grandchildren and the wives’ sudden loss of the beloved men they’d expected to grow old with.

During this last season, I thought about Allen often, particularly when there was a great home game at AT & T that he surely would have been at—MadBum’s gem on Sunday Night Baseball right before the All-Star Game, rookie Ty Blach staring down Kershaw to keep the Giants’ playoff hopes alive, the epic extra-inning playoff win against the Cubs. And you know he would have had plenty to say about the Warriors’ disastrous final week in June and the Giants’ second half and the way the season ended. I imagine him watching that last game up with Wally Pipp and the guys, screaming at Bochy not to take out Moore or bring in Lopez to face Rizzo or…

Many of us share various aspects of our lives in this blog community—Allen never got to be part of TWG, but he would have loved it—and Allen was unusually generous in that regard. We heard about his wife and sons, about his singing in the church choir, and about his bird-watching with Audobon. Most of all, though, we remember how freely he shared with us his amazing photographic art; it’s still all posted—the travel scenes, the nature shots, the Warriors’ championship parade (he and Sara lived near the parade route in Oakland), the 2010 and 2014 parades, and various epic playoff and World Series games he attended over the three championship runs.

I think what struck many of us about Allen’s passing was how intertwined we regulars at GE/TWG have become in each other’s lives and how hard it hit us when we lost him. Considering how Allen lived his life—to the fullest—the best way we can honor his memory one year later is to follow his example: cherish those nearest to us, follow our passions, and be good to each other in this blog community.

Rest well, Brother Allen. We still miss you. And YourGuy™ Christian Arroyo hasn’t been traded yet, either, just like you ordered.

[1] My initial post with the news was on the game story following the April 10 game against the Dodgers. If you scroll down a ways, you’ll find it, plus all the comments in response. There are more on subsequent days. http://blogs.mercurynews.com/giants/2016/04/10/giants-muscle-cueto-settles-take-three-four-dodgers/