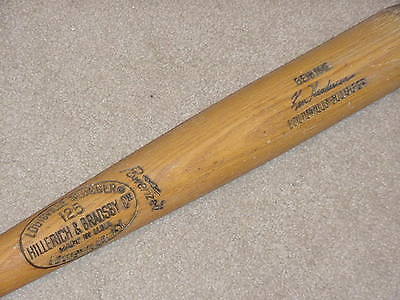 It was May 23rd, 1970…and my parents were taking me to a Giants Game for my Birthday. prior to this game, the only exposure I had to the Giants were listening to Russ and Lon…and the occasional TV games on Channel 2. As luck would have it, it was also bat day!

Thinking back on this game, I came to realize that my Dad actually purchased some great seats; which is something I never thought about before. We were slightly left of home plate and I remember walking down to our seats and being floored by the ugliness of the Padres’ brown uniforms. The Padres were only in their 2nd season and I hadn’t seen their “aways” before.

I was able to bring a friend and we both received an full-size bat from the Giants. For the life of me, I can’t remember what player’s bat he got…but I do remember having the more popular player’s bat…Ken Henderson. The bat become even more treasured, when Ken blasted a home run in the 2nd inning.

As an adult, I can look at the Giants schedule and figure out who the scheduled pitcher should be…and purchase tickets accordingly. When I selected this May 23rd game, the only criteria I had was it was on a Saturday…the Giants were at home…and it was close to my Birthday. Bat Day was known at the time I told my parents about the game…but then we got lucky and Juan Marichal was pitching!!

Just like anything as a kid, the crowd seemed much larger than it actually was. I would have said (and guessed 50,000), but it was only 15,536. I’m not sure how many bats were given out, but every time the Giants were on base…all those bats were pounding on the cement in unison. I remember my Dad being somewhat annoyed with the sound after awhile, but that’s why they have beer 🙂

I was in baseball heaven. Candlestick was sunny, I got a bat, I was eating hotdogs, and Mays (2), McCovey (1), and Henderson (1) all homered! I also got to see Tito Fuentes (one of my favorites) and a guy named Bobby Bonds in RF.

The other thing I remember about this game is how many innings it was…15. I was (obviously) hoping for the Giants to win the game, but I was also really happy to see extra innings of a MLB game for free. I think my Dad was ready to leave after about 11 innings (and 11 innings of bat pounding), but he was a trooper and we stayed the whole game (5 Hours, 29 Minutes).

Attending this game did wonders for my love of baseball. Whenever I looked at the box score in the San Jose Mercury (which was the morning paper) or listened to a game with Russ/Lon…I now had a visual of all the players I saw at that game. I could also tell (brag to) my friends that I went to a major league game at Candlestick Park.

The next year we went to see the Montreal Expos for my Birthday and that was the last time we celebrated that way. And the Ken Henderson bat? It became my favorite as we played softball in front of my house on a daily basis. I obviously no longer have it, but it looked exactly like the bat pictured here. I’ve been admiring this bat on eBay for quite some time and maybe I’ll buy it one day to commemorate this Giants game that meant so much to me.