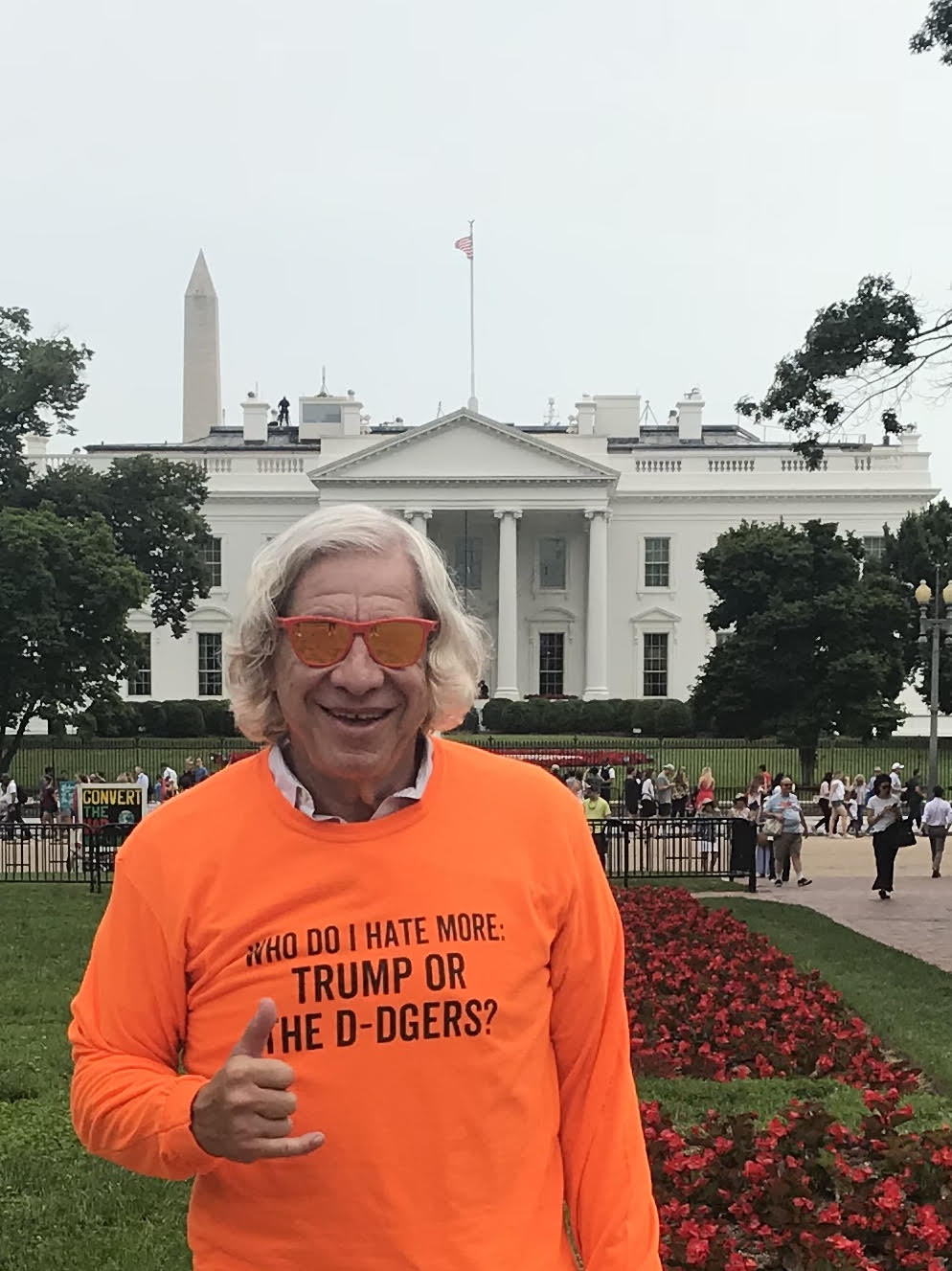 Those of you who are geography buffs may be able to discern from the photograph that SurfMaui is in Washington–for the first three of seven straight Giants games. (Well, hopefully three, since severe thunderstorms are scheduled for today’s weird 4 p.m. start) The last four are in Miami, but that is a commute from home for GG and SM. SurfMaui actually went to college in DC, but in those days there were horses and buggies. A lot has changed–now they have cars and the Metro.

We are staying at the Mayflower, an old hotel on Connecticut Avenue, where many historic events took place.  Because I travel so much– for work, mainly and not just to watch the Giants–I was upgraded to a suite. For you history buffs, among the more recent goings on (and I do mean goings on)  at the Mayflower, was the Elliot Spitzer tryst with his “good friend” Ashley Dupree.  I wonder if this was the same room, though thus far I see no evidence of that (fortunately).

As posted, my he Friday night game was great with the Giants jumping out ahead to a 5-0 lead only to see Suarez dissipate most of it. But, as you all know the Giants had some key hitting and kept adding on. There were a few anxious moments when the Nats got to within one, but, with a four run lead we were spared a Strickland-Harper matchup for what is now all five games of the Nationals-Giants series this season.

I met Cueball and Mrs. Cueball from the blog. He grew up in Burlingame and is a good Giants fan.  We were also seated behind another rabid Giants fan who is from the Bay Area but was transferred here by the military (there were many in the vicinity of the Giants dugout). He told me that he never posts, but does follow the blog- he did recognize the name SurfMaui–but then again who wouldn’t. There as also a very large group of Giants fans from “Giants Vacations.” We all left happy and it started to rain shortly after the game ended.

After an adventure trying to find the place to meet the Uber driver in the rain following the game, we returned to the hotel and found a woman standing near the door smoking a cigarette and wearing one of the shortest tightest dresses in the history of dresses.  I was surmising that she might be, as they say, a “lady of the evening,” but no, in case you are wondering I didn’t find out for sure.

Saturday’s game = not so much fun. It was very hot, and threatening rain, though it never really did.  In the converse of Friday’s game Giants fell behind 5-0, but they came back several times, and had multiple chances to tie or take the lead, most notably with runners on second and third in the seventh with one out. With the infield back even a ground ball or a fly ball would have tied the game and led to using a front line reliever instead of Gearrin, but, as we know Williamson and Crawford, pinch hitting both struck out.

There must be something about this ballpark. The last time I was here the Giants jumped out to a 6-0 lead against Strasburg only to have their bullpen implode and lose the game. So that now makes three in person games for in a row where one team has led by at least 5-0

After dinner we went to a revival of “How to Succeed in Business Without Really Trying” at the Kennedy Center, next to the famous Watergate Building.  Though the cast was very good, in my opinion, in the “Me Too” era the show does not hold up, and SurfMaui’s opinion, will not do well when it heads to Broadway.

Heavy rain predicted for this afternoon. It may work to our advantage in some ways. Nats bullpen is shot, and thanks to Ty Blach ours–at least front line relievers are available. If there is a rain delay it may take Scherzer out of the game. SurfMaui is willing to take one for the team and get drenched for a win.

And, no, for those of you wondering, SurfMaui was not invited to the White House.