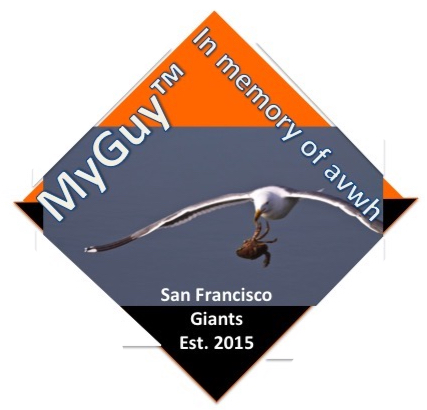 The Giants Prospects are the stars of MyGuy™. Years ago one of our posters, “avwh”, was the “star” for making us think more about the prospects. Then we suddenly lost him on December 20, 2015. He is Allen Hirsch and here is a Tribute to him from the Golden Gate Audubon Society. DrLefty wrote about his baseball life and love on this blog. His initials, avwh, are on the MyGuy™ button.

MyGuy™ is designed to get us engaged in the prospect progress during their season. It is also designed to give each of us focus.

With four minor league teams and roughly 100 prospects to choose from, we each decide on Eight of them that are “My Guys” for the season. That allows us to bite off a manageable piece to digest. And there is pleasure in such a focus.         We use wRC+ [“Weighted Runs Created Plus”] to measure how well each Position player did. As you read this, keep in mind that “100” is an average player in that league playing in that park. Sadly, no defensive metric has been found to include. To measure the Pitchers, we have our own, proprietary combo of WHIP and ERA.

How the Prospects Did

Those we picked and those we missed.

Conner Menez [SP] did not pitch enough in the MLB to get the bonus so his pure AAA numbers were 6.75 ERA and 1.99 WHIP. Even worse was rising star Matt Frisbee [SP] who had 7.64 ERA and 1.79 WHIP. His upside is that he started out the year in Eugene where he did very well.

On the down side was Matt Frisbee [SP]. He started out well in this league 59.2 IP / 65 K / 10 BB / 0.96 WHIP.  But his bad numbers in Sacramento are what he is judged on. Even his promotion bonus could not keep him from showing up at the bottom here. Another surprise bad showing was Tristan Beck [SP] but he missed almost three months in mid-season.

Pitching was led by Caleb Kilian [SP] mentioned earlier for winning in AA when he was promoted. He started here in Eugene so he was a top pick here also. RJ Dabovich [RP] also was promoted to Richmond. While his ERA slipped from 1.42 to 3.66 he still had 19.2 IP and 34 K’s. The disappointment in Eugene was Seth Corry [SP], one of the Top Ten. He struggled so much early on that his numbers could not recover. Being My Guy I was watching and he did finish his last four games with 8.1 IP of shut-out ball and 3 hits allowed. A bright note we all missed was Chris Wright [RP] He had 37 IP, 62 K and a 0.97 ERA.

How the TWG “Scouts” Did
Just the Best

21 of us picked who we thought would be the best hitters and best pitchers on the four Giants full-season minor league teams. That gives us each eight players trying to turn in the best performance on their team. They get ranked among all the other players on the team that were picked. #1 is best and then on down to the last player picked. A perfect score would be an “8”. The lower the score the better. Think golf.
Here are the top half of the scores, the voters and how they did it.

If any others want their scores just ask me.
My email is My SF Giant Guy at gMel dOtt calm [written this way to avoid Bots, but you can figure it out].

Thank you for all the encouragement from so many of you.