PerSpeier35 Guest Post: Chris Speier, Jack Clark and My Life as a Giants Fan in the 1970s 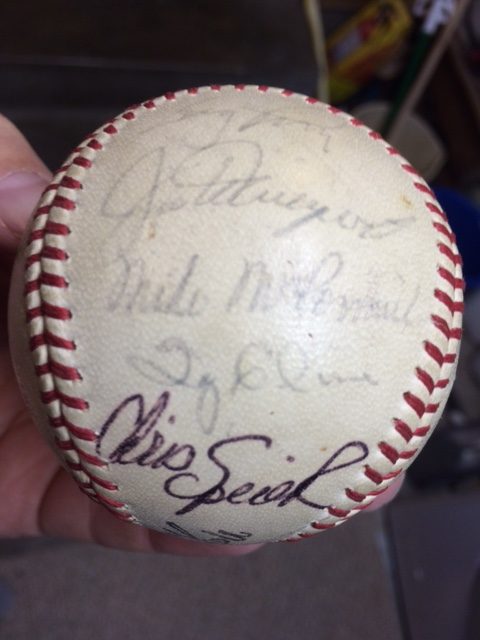 GE regulars have written about their Giants origins over the years, myself included, so those with lock down memories such as Dr. Lefty may remember parts of my story but here goes all at one time.

I was born in 1962 and my parents and younger brother moved to an apartment complex in San Mateo is 1966. In 1967 or 1968 Giants left handed reliever Bill Henry moved in to a nearby unit with his wife and kids, one of whom was a boy my age. I can’t remember his name now but we bonded that summer and played together all the time. They moved back home to Houston when the season ended (looks as though he must have been traded during the season according to Baseball Reference) and I guess in appreciation for me being a good friend to his son he gave me a Giants team autographed ball which is pictured here. It’s the oldest thing that I own that was mine from the start. I keep it protected but it has faded over the years. Mays, McCovey, Marichal and all the rest are represented.

At the time I did not understand what Bill did for a living, I don’t remember seeing him on TV or in his uniform. My earliest Giants memory is this; I used to read the Chronicle Green Sheet every morning.   For whatever reason I still remember two headlines on back to back days: “Two Mays Homers beat Cincy 13-6” and “McCovey homers, Giants Lose 5-3” the next day. Thanks to BR I was able to look it up and confirm the dates: June 22 and June 23, 1970 at Crosley field.

As you might have guessed, when Chris Speier came along in the early 70’s he became my favorite player. He played shortstop and I was playing Little League and I was a shortstop. My Giants highlight from the past was August 1, 1975. They beat the Astros 2-1 and I remember listening to the game on my radio. In the ninth inning the Giants trailed 2-1. JR Richard was pitching and Willie Montanez hit a game tying home run and Chris immediately followed with his own to win the game. I was so happy, going crazy, my Mom thought I set the house on fire. BR of course provided all the details, I just remembered the two home runs and my reaction to them.

Prior to that my Dad took me to meet Chris at an autograph signing session at a sporting goods store in Burlingame. We went right up to him, no one was there, imagine how it would be if Brandon Crawford did that today, there would be lines around the block. Anyway, Chris and my Dad and I talked about things that I can’t remember and he signed a big post card of Giants players, Chris and Tito Fuentes and Bobby Bonds were on it but I can’t remember the others and haven’t seen it in a long time. However, I did bring my Bill Henry Giants team ball and had Chris sign it. The autographs were in blue ball point and Chris used a blue Sharpie type of felt pen so it looks odd but I remember that he got a kick out of checking out all the names.

My Mom coined the nickname “PerSpeier”, she thought it was funny, similar to perspire and that stuck with me to the time I started posting on GE maybe about four seasons ago.

In 1971 when the Giants lost to the Pirates in the playoffs and missed going to the World Series I cried my eyes out. I think I was at school and they showed the games on black and white TV’s in the lunch-room. I’m not very emotional about the team anymore but I used to be, believe it or not, and I may be again one day when life settles down.

My most memorable at game moment would have been the Brian Johnson home run game but, sad and embarrassed to admit to this crowd, I was in the parking lot trying to beat the traffic home. Booooo.

I think it was 1981 when the players struck. I was so upset I vowed not to go to any more games. When they resumed play my Dad’s friend gave us tickets and sure enough there I was rooting on the Giants against the Dodgers at the Stick. Great game, memorable for Jack Clark and Larry Herndon colliding in the outfield and both ending up on the ground after chasing down a gapper. I forget which player it was but one of them caught the ball but it trickled out on to the grass as he lay on the ground and the umpire ruled it dropped and I believe the Dodger player made it all the way around and the Giants ended up losing. People were going crazy and I swear that game was the origin of the protest chant “Bull Shit! Bull Shit!” that people used to yell in unison over bad calls. Too bad they didn’t have instant replay back then, I think the play would have been ruled a catch.

One final memory was from the early 80’s. Jack Clark used to lose a lot of homers to the Candlestick winds. My girlfriend and I were at a Friday night game and the Giants were down 4-2 to the Cardinals. I believe Bruce Sutter was pitching and Clark hit a stunning three run homer in the bottom of the ninth through the teeth of the wind for a walk off win. Those of us at the game were going crazy and we were yelling so loud, trying to get a curtain call. I always remember it because the darn PA announcer came on and killed the moment with his booming recap of the game. We were so upset, it was so much fun going bonkers over the dramatic victory.

So that is my Giants origin story and a few memories, I hope you all found it at least somewhat interesting. I’m fortunate and grateful that even in my mid-fifties I’m still healthy enough to be able to play baseball and play it pretty well. Playing today (the day I’m writing this story) in fact, probably just jinxed myself, here’s comes and oh for four and a couple of errors.