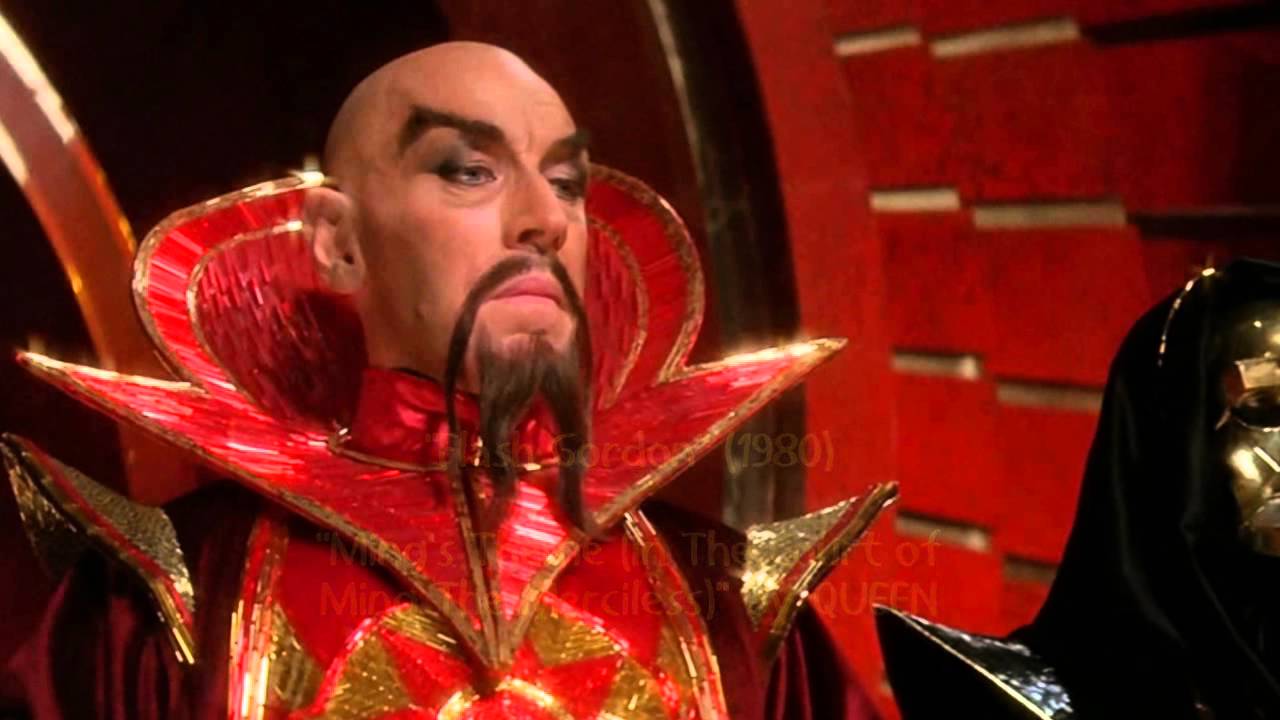 Life is a trade-off.  Far too often we are reminded of this fact as we are forced to choose between two options, sometimes the greater of two goods, more often, the lesser of two evils.  Or maybe it’s a mental negotiation you entertain with yourself about what you’re willing to relinquish later in life for an exquisite bird in the now hand.  I know where you think this is going, which Giants’ players am I looking to ship out for some glorious future return that will be perennial ring and parade makers but you got me all wrong.  The title of this guest post asked what would you trade, not who.  Pronouns matter, people, so I don’t care if you’re a Gordon who loves to deal, be it Gordon Gekko or Flash Gordon, there will be no human day trading on my watch, though I WOULD deal Bud Fox for Ming the Merciless.  Fox is rather pasty and soft whereas Ming has a nasty, bronzed, sidewinding southpaw vibe to him and with that scowl and facial hair, I could see him being absolute death on lefties, like an Al Hrabosky if he ruled Mongo.  I mean, who wouldn’t want THAT guy in their pen?

I love gravy.  I really can’t think of any type of gravy that I’d disdainfully turn my nose up at (though I must admit that my time in the Midwest has kind of ruined biscuits and gravy for me in other parts of the country) (what, you thought there wouldn’t be parenthetical asides? Peachy lives for these).  I also very much enjoy found money.  Who doesn’t?  Has anyone ever spotted a $20 bill on the ground and thought, “It’s pretty dirty,” and kept walking?  Which brings us to 2010.  Like many of you, I was living and dying with the Giants down the stretch and into the postseason.  The further they went, the more you believed, yet, fear of disaster always resided somewhere in your psyche.  What if it ended up like 1989 or 2002?  If someone put a gun to your head and demanded to know which was worse, what would you say?  2002 was longer and having a 5-0 lead in the 7th inning of Game Six is the stuff of gigantic nightmares, but ‘89 was a sweep to the Gordon A’s (why does Gordon keep appearing?) and the earthquake just dragged out the misery.  In all honesty, I might just request the gunman pull the trigger so I could get visions of rally monkeys dancing on a collapsed Bay Bridge out of my head.

So, if Ming sidled up to me back in 2010 with a devil-like proposition, I would’ve been all ears.  Let’s say he offered a title that year and asked how long I would wait for another.  I might’ve blurted out, “Ten years!”  At that point, I’d endured almost forty years without a Giant parade, leverage didn’t reside in my arsenal.  However, being the shrewd negotiator I am, maybe I would’ve opted for five.  Then we win it.  I’m ecstatic and feel wholly satisfied with the deal.  Two short years later, I’m in Vegas at a sportsbook and he reappears, draped in velvet for some weird Costanza-like reason, and offers another championship.

Two titles in three years?!?  I’m in a gambling mood and decide I’d have no problem extending our drought ‘til 2020, at the earliest.  And… boom!!  It happens.  It seems too good to be true.  It’s 2014 now and I’m still basking in Ming’s bronze glow while sitting in Koreatown enjoying some kimchi and Ming takes the seat next to me.  Seriously?  He’s back?  Offering another championship?  This would be three in five years!!  Yes, I’m feeling like I’m now residing in much more of a position of power but…  I think of Tim Hudson and Jake Peavy.  I can secure them a ring?  I immediately go Bud Fox soft as my Manhattan high rise apartment has been destroyed by Darryl Hannah’s bewildering interior design choices which have turned my brain to mush and I scream, “2030!!”  He smiles and shakes my hand.  I’m wondering if I’ve been taken for a ride on the Merciless Express but then Ishikawa happens and Game Seven Bumgarner occurs and I feel nothing but gratitude.  I have to wait another 16 years?  So be it.  I’ll be swimming in gravy littered with found money the entire time.

I don’t know a lot of things but I know this: you can’t win it all if you don’t make the postseason.  Yes, it seems exclusionary and unfair, 1993 probably the best evidence of this.  You win 103 games and are on the outside looking in, your face plastered against the window which is streaked with your Salomon-flavored tears.  But that’s the way it goes.  If you can just manage to sneak in, you’re playing with house money.  If you’ve already won three titles this decade, you’re covered in gravy with that money clinging to the sausage ( yes, sausage gravy is my favorite but, really, I felt like we were due for another parenthetical aside).  Nobody is promised tomorrow, and even the highest rated baseball prospects aren’t promised a long and fruitful Major League career.  Nor do these prospects who pan out guarantee you a parade.

You can look no further then the boys in blue down south who seem to have had an obscene abundance of wealth as it pertains to generating players and they haven’t won a damn thing in over 30 years.  Spare me the “They’ve won the division or pennant” nonsense, that’s kissing your sister.  Or even worse, your brother.  Frankly, I’d rather not experience that much “success” and not be hoisting the trophy.  The Braves won their division a record 14 times between 1991-2005.  They won it all once.  If I’m a Braves fan, I’m not filled with gratitude and harmonious memories.  I’m still enraged and swollen with regret at witnessing that much dominance for that long and only ascending the mountain one time.

Banking prospects for some rosy colored future success guarantees you nothing.  I’m also of the firm belief that breaking up a team even a little bit who has won 17 of 21 not only crushes your team’s spirit, it’s also noticed by players around the league and will be remembered come free agency.  Lord knows, we’ve had a hard enough time signing players, you don’t need that kind of negative baggage associated with your franchise.  Of all my issues with Billy Beane, it’s his shuttling out of players from teams that had a legitimate postseason run in them for yet another slew of prospects.  Why would any prominent free agent ever sign with the A’s when you don’t feel like their GM is ever really gonna go for it?  Sometimes, when the men in your clubhouse are performing in such a way that screams “We believe!” you must return the favor for belief is a two-way street.

I’m lounging by the pool and in strolls Ming wearing a Speedo for some bizarre, I’ll never un-see this reason, and my mind immediately begins churning.  He plops down onto the lounge chair next to me and begins lathering himself up with baby oil as I attempt to keep my eyes averted.  I haven’t seen him in five years and he chooses to appear now, in the midst of this insane Giants run?  Is he really going to offer up another championship?

I begin to do the math, knowing the last deal I made ensured no more titles until 2030, so I remain silent waiting for him to speak first but he now has one of those ridiculous sun reflectors people use to really expedite their skin cancer propped up on his chest and is paying me no mind.  I quietly whisper, “2035” half-hoping he doesn’t hear me but I detect the faintest of chuckles.  I come back with a more forceful “2040” and he turns to me, making eye contact for the first time and it is immediately apparent by the coy grin on his evil Mongolian face exactly what the sacrifice will have to be (wait, are the inhabitants of Mongo called Mongolians?).  Yes, in order to lock up the 2019 title, I’m going to have to forego any other Giants World Series victories for the rest of my life.

It’s too much.  There’s no way I can make this deal with the devil.  But how much longer am I going to live for?  Hell, there’s a good chance I might drink myself to death come October at Surf Maui’s parade party.  In five years, I could get frozen like a me-in-the-headlights and be obliterated by a Winnebago.  I’ve never felt this conflicted before at any time in my life.  Damn, this Ming really is merciless.  Then, I think of Stephen Vogt winning his first ring with his childhood team and the joy he’s brought to the Giants.  The realization that locking down this fourth championship will ensure Madison Bumgarner will never don another uniform and play his entire career in San Francisco, just as the baseball gods intended.  And finally, I can clearly envision Bruce Bochy ending his reign as the Giants skipper with one last hoisting of the Commissioner’s Trophy and I actually begin tearing up, painfully aware of what a blubbering mess I’ll be once I actually witness it.  I don’t know what to do, TWG.

WHAT WOULD YOU DO?!?