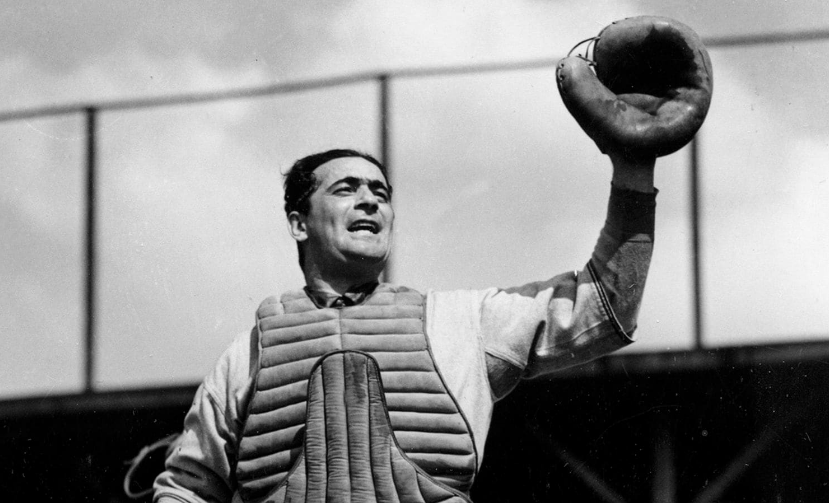 Many of you have undoubtedly heard of Moe Berg who played 13 years mostly as a back up catcher, after starting his career as a shortstop/third baseman for the Dodgers (then Robins), and then the White Sox, Indians, and Red Sox. Berg graduated magna cum laude from Princeton, and got a law degree from Columbia while playing for the White Sox. He became more famous more recently over the last several years because of the disclosure of his service as a spy for the predecessor to the CIA prior to and during World War II. Because of, among other things, his extraordinary language skills (he supposedly spoke about ten languages fluently) his exploits included being sent to Switzerland late in the war to ascertain whether Germany was close to achieving an atomic bomb, and if necessary to assassinate their lead scientist Heisenberg. His baseball card is the only one on display at CIA Headquarters.

Moe Berg’s extraordinary life has been the subject of a 1994 biography “The Catcher was a Spy: The Mysterious Life of Moe Berg” which was dramatized in a 2018 feature film. Currently playing in movie theaters is a documentary on Berg’s life, “The Spy Behind Home Plate” which Vailsunshine and I saw the other day, and which SurfMaui highly recommends.

In the film they referred to an essay that Berg wrote in The Atlantic in 1941, entitled “Pitchers and Catchers.” The New York Times in a 2018 article about Berg referred to this essay as “still one of the most insightful works ever penned about the game.” Here is the link to read it yourselves.

From the article it is clear that analytics are not a recent phenomenon. Berg describes many of the baseball greats and their astute adjustments, batter by batter and pitch by pitch in the 150 year ongoing battle between pitchers and batters. Players, and certainly the great ones, were analytical before the advent of video and computer data analysis. They successfully did so without the availability of 21st Century technology, and in reading the essay, did a pretty amazing job of it. (After all, it might be well to remember as we approach the 50th anniversary of the first moon landing, they got there with only pencils, paper and slide rules, and far less computer power than in my phone.)

What also becomes clear, is how little the game has changed in the almost 80 years since this essay was written–and long before that. My fear, however, is that as we gain more and more technology, the players are losing and ultimately will have lost the baseball “smarts” that Berg’s essay describes. That’s also one of the reasons why it is so interesting to listen to and learn the wisdom passed on by veteran analysts, like Mike Krukow as to what the players should be thinking, and what is really going on in the game. It would be a real tragedy if this baseball IQ disappears and we are left with just numbers crunching. It would be well to recall that in addition to his physical skills, what made Barry Bonds one of, if not the greatest hitter of all time, was how smart a baseball player he was– both at bat and in the field– because he could detect and adjust to the even the most minor change in delivery or other aspects of the game and use his skills to take advantage of it.

Moe Berg was unique in the sense of his formal education and obvious intelligence. But to hear (read) his articulate description of how the game of baseball is really played is not only interesting but instructive. So read the essay. I think you will be impressed by how well it holds up. And maybe see the documentary. I think you will enjoy it.