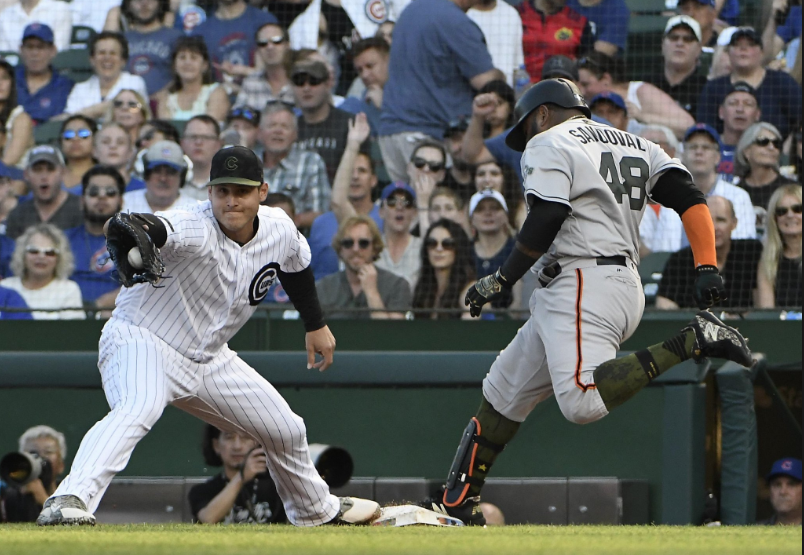 Let’s clear up one thing right away. I hate the Cubs and I hate Wrigley Field:

Wrigley Field even after the renovations is a dump and a very unpleasant place to watch baseball.

If you had asked me before today I would have said NOTHING. However today I found a filet mignon sandwich in the renovated concessuion stands, which they made that to order for me, so there is that–however there still is no salt in Wrigley, Anyplace!

Things I hate about Wrigley and the Cubs

1. The speaker system is the loudest and most annoying since electricity was invented. My son (who otherwise loves Wrigley and won’t say a bad wiord about it, measured the decibel level during the playoffs last year and it was above danger levels)

2. They replaced the already narrow seats with seats at least 2 inches narrower. The only person who can sit in them comfortably is Twiggy (If you aren’t old enough, ask)

3. The Cubs fans since they won the WS are all obnoxious. I hate when they get up when there are two outs and two strikes on the batter (But I love it like yesterday when they were forced to stand for 4 batters before the Cubs could finally close it out–or today in the ninth when they stood for the ninth only to see Strickland close it out)

4. The bullpens are invisible from the stands and the bullpen pitchers have to waych the game on TV– and they start this stupid dance when the Cubs

5. I hate that stupid Cubs song when they win

5. And mostly I  hate that the Giants have had such a hard time winning here over the last few years and I have to hear the loadspeaker, sit in the narrow unsittable seats, listen to the obnoxious fans and hear that stupid Go Cubs Go song.

So tonight’s game was a relief

Actually both days so far (Friday and Saturday I went to double headers. In addition to watching the Cubs-Giants I saw my grandson’s team, the 12 U Stoppers win two games with my grandson going 1-2 in both games with 2 RBI and 2 RS, before injuring his thumb sliding into second today–putting his ability to play tomorrow in serious jeopardy

1. After letting up and unearned run the first resulting from a passed ball, and being bailed out by a William trow to the plate, Holland pitched very well, at one point retiring 10 in a row. Again walks were our downfall, with a hit barter followed by two walks and Zobrist double breaking the game open, Over the last three outings Holland has been by far our best starter, and at this point is a sure thing to remain in the rotation when MadBum returns.

3. Crawford made the first of his two spectacular plays in this series, barehanding a ball that ricocheted off Longoria’s glove and throwing out the speedy Baez in one motion. Trust me, seering the replay on TV does not do justice to how spectacular that play was in person.

4. Hernandez continued to amaze with his 5th HR and two hits.

5. Hendricks was masterful. I seem to recall that the Giants had trouble wuith him in the past. It was not until the 6th inning that he was in the strech–and he promptly immediately issued a walk.

6. Giants core relief let us down for one of the rare times with Smith walking in a run and then a bases loaded double to Zobrist.

7. Giants made the ninth inning unpleasant with three two out baserunners, making the Cubs use 3 pitchers, and forcing the Cubs fans to stand and start to get a little nervous.

1. FINALLY A WIN IN CHICAGO

2. Went to the game with my son after catching the Stoppers 12 U shut out the Des Plaines Warriors 16-0

3, Stratton continues to scare me. After a 1-2-3 first inning he loaded the bases with two walks and a single. He was bailed out by a hard comebacker and throwing out a runner at the plate and — with the pitcher on deck— walked the 8th place hitter on four pitches to force in a run. Then he really dodged a bullet. In one of the dumbest moves in the history of baseball, the pitcher (after seeing three walks in the inning and the last batter walk on 4 pitches) swung at the first pitch and hit into a 4-6-3 double play. Thank you very nice. Stratton gave up two monsterous home runs but somehow managed to limit the damage to three rtuns when he left after 5 innings with a lead thanks to a wind aided Crawford  two run HR, two bback to back doubles by Hernandez (3 hits for the night) and McCutchen and a clutch base hit by Belt.  If you had given me a million to 1 odds that Stratton gets a win tonight when the Cubs had a run in and the bases loaded wuith one out in the second inning  and Quintana hadf struck out 4 of the first 6 batters he faced, I wouldn’t have taken the bet.

4, Unless Stratton really straightens himself out, he will be the guy sent down when MadBum returns.

5, Crawford made an even more spectacular play than the day before on Contreras in the 4th. Watch it if you havent seen it. The runner was called safe on the field but the call was surprisingly, overturned.

6. Williamsion had a bloop single and walked, but struck out twice.

7. For those of you who think that I never criticize Bochy, here’s one for you. In the 9th Blanco led off with a a walk with a one run lead. Instead of bunting Hernandez, he hit away into a double play, folowed by a McCutchen single, costing them would could have been a critical run. On the other hand, sending Hernandez in the 7th stayed out of a double play and led to a run when Longoria singled and Belt hit a sac fly (BTW Schwarber’s thropw to the plate almost nailed Hernandez– it was an incredible throw.

8. Bullpen held up. Moronta was lights out, hitting 97.

That’s it for now. Oh, did I mention how much I hate Wrigley and the Cubs?  It was nice not havibng to hear that song again.

It wasn’t just my imagination as to how much I hated Wrigley Field. Until last night the Giants had lost 13 of their last 15 at Wrigley— including the longest rain delay in baseball history. And I was at all of those games. No wonder I hate that stupid Cubs song.

The day started out by the 12U stoppers losing to the Patriots 3-1 in a well played game, which considering the age of the kids looked like real baseball. The pitchers threw a much higher percentage of strikes than either Tyler Chatwood or Ty Blach did later that evening. My grandson was forced to sit out the game wirth a nagging thumb injury– he probably wont need to go on the DL , and is listed as “day to day.”  His blinding speed was missed. Actually, though he is a pretty good player (not just Grandfather speak, really) but he is not very fast– he runs in the same place for a long time so one of his team mates nicknamed him “Moonwalk”  I think it will stick.

That was actually the highlight of the day– the Giants game was unwatchable for many reasons: Have I mentioned that I hate the Cubs and Wrigley? I have now seen the Giants lose 12 of  their last 15 here. I hate hearing that stupid song and the Cubs bullpen pitchers dance when there is a Cubs HR.  I solved the narrow seat problem but not selling my son’s seat next to me so it was empty–and worth it. But I still had to put up with a jerk Cubs fan two seats over. With the Giants leading 3-0 in the bottom of the first and the Cubs scored one run (they were still losing, he came over to me and hit me in the shoulder and said “how come you are not cheering/” I replied that, “you know, there’s nothing on your ticket that requires you to be an asshole.” He skulked away (This is not the first time that a Cubs fan felt entitled to put their hands on me– something that has never happened in any other road stadium) Yet opne morte reason to hate the Cubs and Cubs fans.

Thhe game itself was a disappointment. Staked to a three run first inning lead, Blach coughed it up in the bottom of the inning. The Giants left the bases loaded with no one out without scoring and left  8 runners on base in the first three innings.  Blach walked three straight batters–at one point throwing 11 straight balls- before pitching out of it, but in the fateful fifth inning issued a leadoff walk to a pitcher who had never had a hit. That was the game.

Walks are killing us. At least once Stratton when given the lead was able to hold it despite a shaky performance. It certainly appears that neither Stratton, Blach, nor  Suarez have the stuff to challenge, so they nibble and pitch from behind, till they have to come in leading to a big hit. In Saturday’s game Stratton at one point threw first pitch balls to 10 out of 12 straight batters. We can not survive this poor starting pitching, Not only does it put us in the hole, but it is killing an already taxed and weak  long relief bullpen, MadBum will help, but if Cueto doesnt return healthy and someone doesnt step up I don’t see how we can be competitive. Perhaps its the pitching coach. To me he is on thin ice, Bring back Righetti.

One positive note, Pablo actually looked like he could play second base. He was tested immediately on a ricochet shot off the pitcher which not even Crawford could have turned into an out, He dove to his left to get the next out, and wound up turning a 6-4-3  double play. He may not be the best second baseman, but he looked at least servicable and thus a more valuable piece. Next stop–outfield.

Well, that’s it for my Chicago road trip–sorry I couldn’t get another win. I’m off to NY for work tomorrow, but GG and I will report on the Giants trip to Miami on their next road trip.