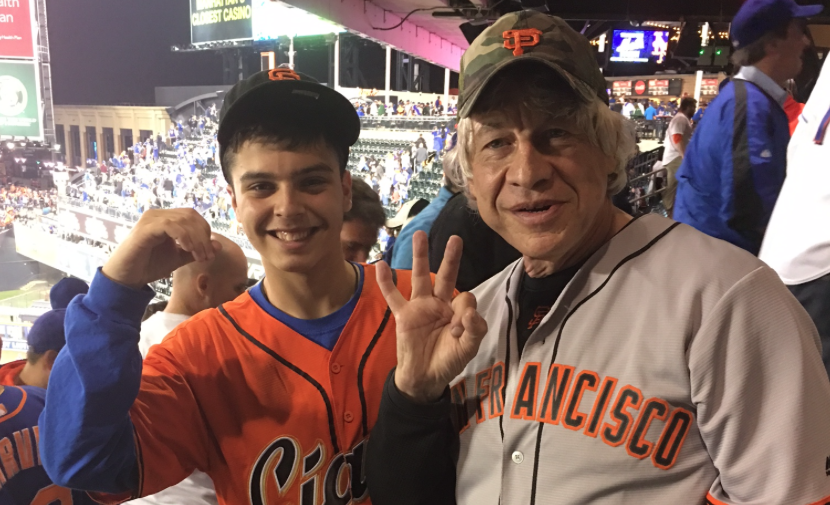 On Tuesday afternoon, I was sitting in my new house in Boynton Beach, Florida contemplating the playoffs and Matthew (the impending hurricane, not the poster on Together We’re Giants). There was someone working at my house–actually, believe or not on making arrangements to place my Madison Bumgarner 2014 Locker, but that’s another story.   We were discussing the storm, which was bearing down in a direct line to my still unpacked house, and he told me that in the last major hurricane in the area, 11 years ago that people were without power for 2-3 weeks and that I should be prepared.

I quickly surveyed my meager supplies– a couple of decorative candles (but no lighter or matches) a flashlight with questionable reserve power, a few double A batteries, and a few low carb power bars. There were already huge lines at stores for food. He told me that I should get out of the area if I could.

Normally I would not attend the wildcard game, but after weighing the possibilities— hmmmm: Heading for NYC to see the Giants-Mets in a cage match, no prisoners and then to Chicago to see my kids–win or lose–with the real possibility of seeing the Giants beat the Cubs versus sitting in my house for several weeks in the dark, without food, and missing the Giants run to another WS title because of no electricity, my razor sharp brain decided to get on a plane and head for the Big Apple, Chicago (where my son the Cubs fan has season tickets) and on to SFO to see MadBum win Game 3.

Within the hour I had secured one of the last seats out of West Palm Beach to NYC, got a hotel room, a ride to the airport, and scored a ticket on Sub Hub–way cheaper than I would have thought. (Then again how many Mets fans would want to see their butts kicked by MadBum and Connor Gillaspie–albeit they couldn’t have known about the latter, on Tuesday, though the former was preordained?) I dropped off my house key with Greek Giant who was left to guard all of Palm Beach County and I was off.

I went to the game Wednesday and the Mets fans were loud and obnoxious–though not to me personally. Everytime Syndergaard got two strikes on a batter–which obviously was a lot– they all stood. As a result I never saw any of the Giants hits–including the home run which was hit to the one place in the park that was not visible from my seat, even if everyone in front of me was not standing. However I did see Crawford jogging to home plate and the raucous crowd go deafeningly silent. It took me a couple of seconds to compute what had just happened–helped by the kid (Giants fan) next to me yelling HOME RUN!).

Obviously MadBum was masterful, however I didn’t know all of the stats about how epic this performance was until later. (To their credit, by the way, the Mets fan all thought that Span was safe.) Like the Mets themselves after the Gillaspie HR, the fans were defeated, and there was no chance of a comeback. Even Casilla could have closed it out–ok that might be an exaggeration– but maybe.

Then it was off to Chicago yesterday morning, and from the news reports, my trip here was less stressful than the team’s– though to be fair I had less luggage. I took my grandson to baseball practice last night, and even with about 15 years of rest on my pitching arm, it is sore today. My next scheduled start will be 12 years from today. My son and grandson (both Cubs fans) however gave me a new glove for a present. Check it out.

So I’m on my way to Wrigley in a while. Got my Johnny Cueto shirt on. Giants have lost 7 of last 8 here–all of which I’ve seen–but those weren’t in October. One further note. Listening to sports radio here the Cubs fans are already making excuses about the series– e.g. “its not fair to have the season come down to a 3/5 series, after all we were the best team over the season,” Wah, Wah, Wah!

More important than the wild card win–well, maybe almost as important–it sounds like Matthew (the hurricane, not the poster) went just north of me and GG, so all seems well so far with SurfMaui’s Excellent Adventure. Now that I’m in the swing of things I hope to be on a three week road trip culminating in the parade down Market Street. (Screw my kids inheritance.) It would be nice to win the WS at home for a change and to be there for the celebration.