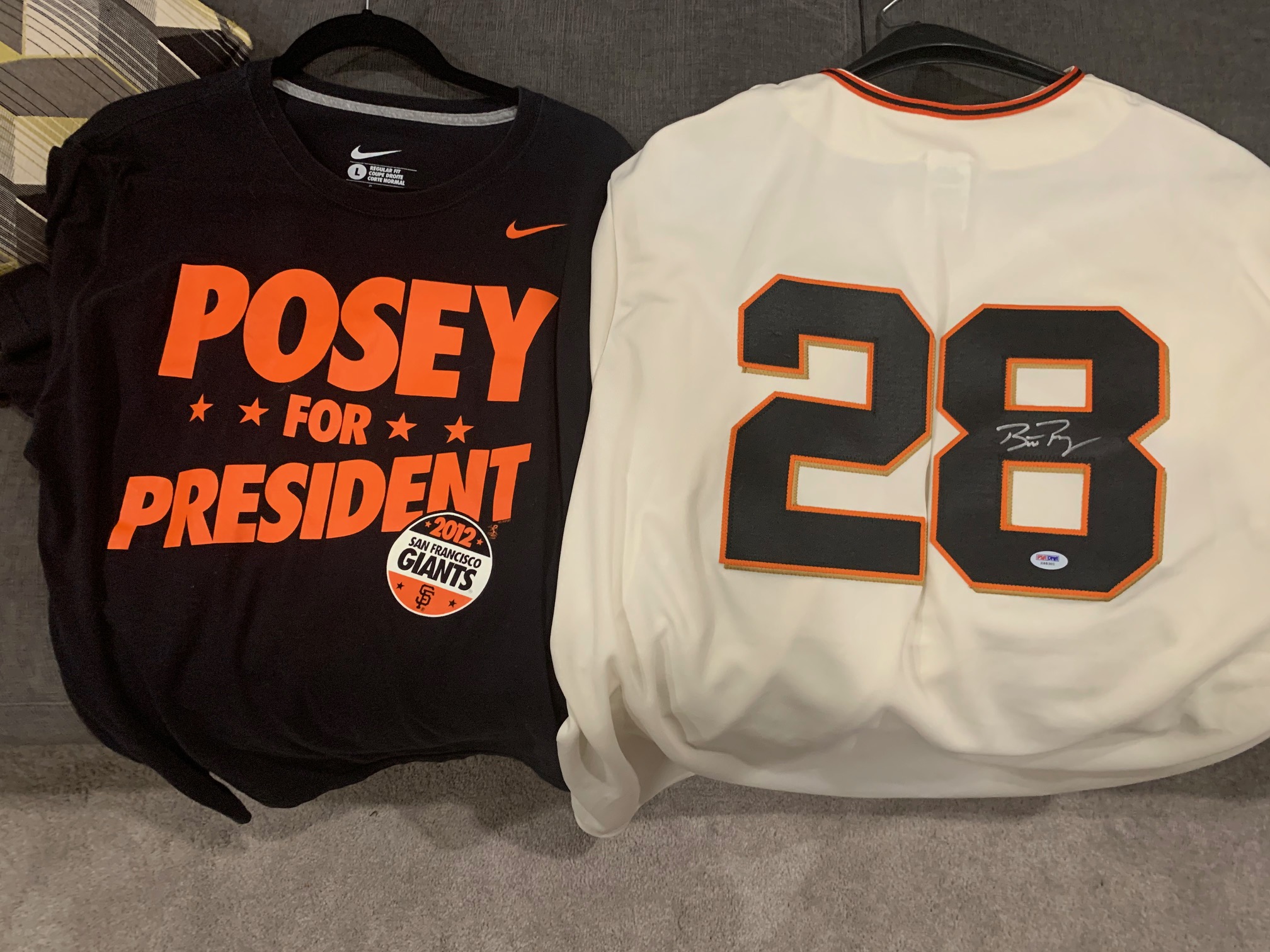 If there is to be Giants baseball in 2020, it won’t be with Buster Posey. As we all know, he made the very classy move to opt out of baseball this season in order to avoid exposing and taking care of his newly adopted fragile twin daughters.  Congratulations to him for having his priorities in order.

As the eternal optimist, SM still hopes for a trifecta of good fortune that by early October (a) Covid-19 will be conquered and is no longer a health consideration; (b) Buster’s children are strong and healthy; and (c) the Giants make the playoffs, and, led by the triumphant return of Buster Posey go on to win the World Series. (Okay, as long as I’m looking a a three way parlay, I can add a fourth: By November 3, there will be a healing election).

Since Buster is in our thoughts, it seemed to be a reasonable time to show part of the SM Museum Buster Posey Collection.  I need not recount all of Buster’s accomplishments which are well known to those on this site. Although injuries have hampered him over the last couple of years, SM, as I am sure many others will agree, hope that Posey will be a Forever Giant. However let’s consider just a few of Buster’s baseball feats:

Most people think, as did I, that Buster was first drafted by the Giants in the first round of the 2008 draft. Not so: Actually he was a 50th round pick out of high school in 2005 by the Angels. After a meteoric rise, Buster made made his big league debut versus the Dodgers on September 11, 2009. Here is a ticket stub for that game. No, SM was not there, but a friend of mine, found it on line and bought it for me 6 or 7 years ago.

Next up is Buster Posey MVP Poker Chip. I have no idea where I go it, or that I even had it until I started searching through my stuff to write this piece.

Here are two different Posey Bobbleheads that were giveaways at the ballpark, and which I’m sure many of you have as well.

The Museum also includes a signed Posey jersey as well as a Posey for President T-Shirt, both of which are hanging in the MadBum Locker about which I wrote previously.

And finally no Posey Museum Collection would be complete without a signed catchers’s mitt  and mask.

So that’s it for this installment. But in these difficult times here is a Buster Hug photo for everyone out there reading this on TWG. Be safe and stay tuned for more of the SM Museum and Mancave tour.  See you at the World Series Parade and I’m looking forward to a great comeback season for Buster in 2021. Just remember what happened the last time he missed most of a season.