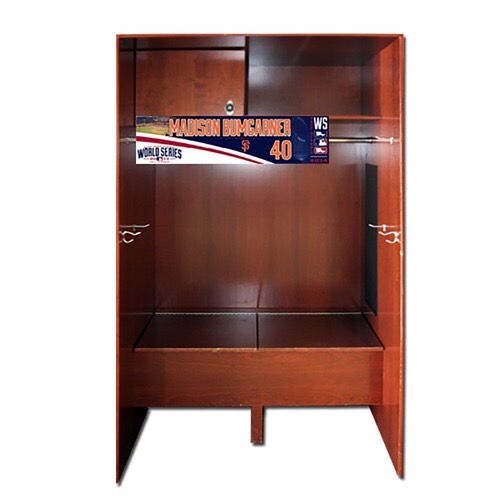 It is well known that SurfMaui was a huge fan of Madison Bumgarner–the depth of which may become more apparent later in this installment of the SMGMAMC®. Subject to the vicissitudes of the Covid-19 Pandemic, with baseball perhaps starting in a few weeks, it struck me that prior to Giants fans suffer the ignominy of seeing him in the uniform of the Not-Giants, it was the appropriate time to show some of my MadBum collection. (As an aside to our resident professional linguist, Dr. Lefty, this is the first time that SM can ever recall using the words “vicissitudes” and “ignominy” in the same sentence.)

Madbum’s career with the Giants was, of course, one for the ages. Though unfortunately impaired by injuries–one of his own making and one an unfortunate line drive–he will remain one of the greatest competitors ever, and certainly the greatest post season pitcher in baseball history. I need not recite to the TWG faithful all of what he did for the team and us at TWG–two wild card complete game shutouts, eight innings of shutout baseball as a 20 year old leading to the first San Francisco World Series win in 2010, and culminating in 2014 with two wins and an epic five inning save on two days rest in the 2014 WS. In five World Series appearances he let up a total of only 1 run, a solo home with a big lead–and has the lowest World Series  ERA of any starting pitcher ever. Is it any wonder that SM closed out all his 2019 posts on TWG with the words “Sign MadBum?”

SM attended Opening Day in 2015 and stayed for the home stand. Obviously it was a time of great celebration and emotions ran high at the ballpark–the memories of the 2014 WS still fresh in everyone’s minds. Before the game, on my way to buy food from Marie, a vendor from whom I had been purchasing game day “good luck” food since Candlestick days I passed the Giants memorabilia store on the Field level.

There I saw the very locker in which Madison Bumgarner dressed for his entire Giants career, including three World Series. It was for sale. I asked how much, and though pricey, it was actually less than I would have expected–given who it was, the WS exploits it played a role in, and its truly one of a kind nature.

I passed on it. However, over the remainder the week I kept being drawn back to the locker, and asking my nephew and a friend who was with me, should I pull the trigger– I really wanted it. Factoring into my thinking was not only the price, but what would I do with it? And how would I get it to my house in Albany, New York, 2,500 miles away from San Francisco –but only 70 miles from Cooperstown? It was very large and heavy –3 feet deep, 4 feet wide and 60 inches tall. I passed again, and again–my mood not helped by the Giants losing eight in a row. After the home stand I returned to Maui.

Over the next two weeks I began suffering non-buyers remorse, and the more I thought about it, the more I wanted that piece of history. Finally after about two weeks I called Peter at the memorabilia store and asked if MadBum’s locker was still for sale. “Yes,” I was told, and after I said, “I’ll take it,” Peter said, “I don’t know if we can sell it to you.” Bummer!  Peter explained that after the 2014 season the Giants remodeled their clubhouse, tore out all of the lockers and sold them at an auction. SM had not been aware of the auction. MadBum’s locker had been “sold” at auction, (at a much high price) but the buyer backed out of the deal (maybe he also couldn’t figure out how to transport it), and Peter didn’t know if they were obligated to offer it to the second high bidder. The more he told me that I couldn’t have it the more I wanted it. (Peter told me that they still had Hensely Meulen’s locker available–not exactly the same thing). I was totally bummed out  It is actually a pretty good technique to tell someone they can’t have something that they’re ready to buy. Peter told me that he would get back to me, and sure enough about two weeks later he called back and I bought it on the spot.

Now I had to figure out how to get the locker to my house. SM’s nephew from Palo Alto came to the rescue and found a drop shipper who would pick up the locker, blanket wrap it, and deliver it. Jump ahead about a month, and the truck driver called to tell me that he would be at my home in about an hour. I had figured out just where I had planned to put it in the house, and at the time I was contemplating moving to Florida. It suddenly dawned on me, however, “gee, I wonder if this will go through my door?” Armed with a measuring tape, I scoped out the front door. Nope. “Ah, I thought, it will go though the sliding patio door.” Nope. So into the garage this one of a kind collectors item went where it stayed for almost two years, until I moved into my new house in Florida (where I met GG) which had double doors (the house, not GG) to allow the locker into my newly designed Man Cave.

So here is Madison Bumgarner’s 2014 locker–the premier piece in my Mancave Museuem Collection. You can almost smell the used athletic supporters.  Does anyone happen to know MadBum’s locker combination?  Also, since my kids won’t want it does anyone have a spare moving van to take it when the time comes?

Naturally I had top fill the locker with something, so here is a signed Madbum jersey (I’ll discuss the other jersey’s in another installment) along with replica lineup sheets for his three 2014 World Series appearances as well a Buster Hug photo and the Sportsman of the Year SI cover.

That’s it for this installment of the Museum tour, but don’t worry, there’s plenty more in the Mancave–albeit not quite as unique as MadBum’s locker.