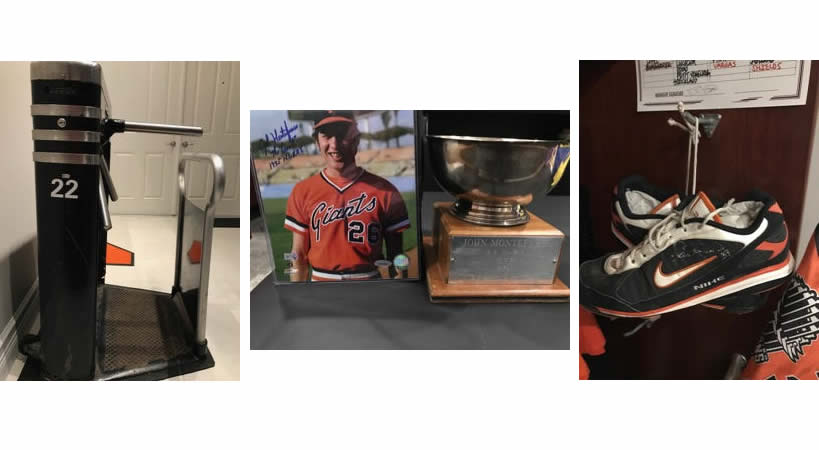 Much of the Giants stuff that I have assembled over the years are things that many of you have, or at least had at one time. Perhaps I’ve just been better at keeping them, and now putting it all out on display in my Giants Man Cave. So in these posts I’ll try to focus on some of the things in my collection that are pretty unique–or, in the case of the first item, totally one of a kind.

It’s John “The Count” Montefusco Giants Team MVP Trophy. It was awarded to him as team MVP by the San Francisco Baseball writers in 1976. As many of you may recall, “The Count” burst on the scene in 1975 when he was the NL Rookie of ther Year and, until Jonathan Sanchez pitched his no-hittter, Montefusco was the last Giant to pitch one, doing so in 1976. Before a July 4, 1974 start against the Dodgers Montefusco “guaranteed” a win and then proceeded to pitch a 1-0 shutout. He is the only pitcher (and one of two players) in MLB history to hit a home run in his first at bat and win a Rookie of the Year. (Bonus points if you can guess the other one.)

Long after his career ended Montefusco was arrested charged with assaulting his former wife. He was held in jail for two years because could not raise the $1 million bail before eventually being acquitted.

I found this trophy on a dealer’s web site– when, believe it or not– I was researching the value of World Series rings for a technical legal book that I was writing. (I know that sounds crazy, but it’s a long story that really isn’t all that interesting) I’d hate to think that this trophy was available because he needed the money and was forced to sell it. The dealer told me that it had been donated to a charity auction, but I don’t know if that’s true. So if “The Count” wants the trophy which he earned back, I am happy and honored to give it to him. If anyone happens to see him, please pass on the offer.

The second fairly unique piece–though certainly not one of a kind– is my turnstile from Candlestick Park. A lot of us got seats when they tore down the Stick (guilty) but I had to have a turnstile. It now sits at the entrance to the Man Cave at my new house in Florida where it keeps track (the counter still works) of the very few women coming in and out.

The third unique piece are a pair of signed game used Aaron Rowand cleats. You’d think that for his $12 million salary, they might be in better shape. Though Rowand’s Giant career was not exactly stellar, he will always be remembered for his hit to completely break open Game 2 of the 2010 World Series.

That does it for this installment of SurfMaui’s collection. If you guys find these posts interesting I’ll write a few more, at least one of which I promise will include something truly unique. Right Greek Giant?