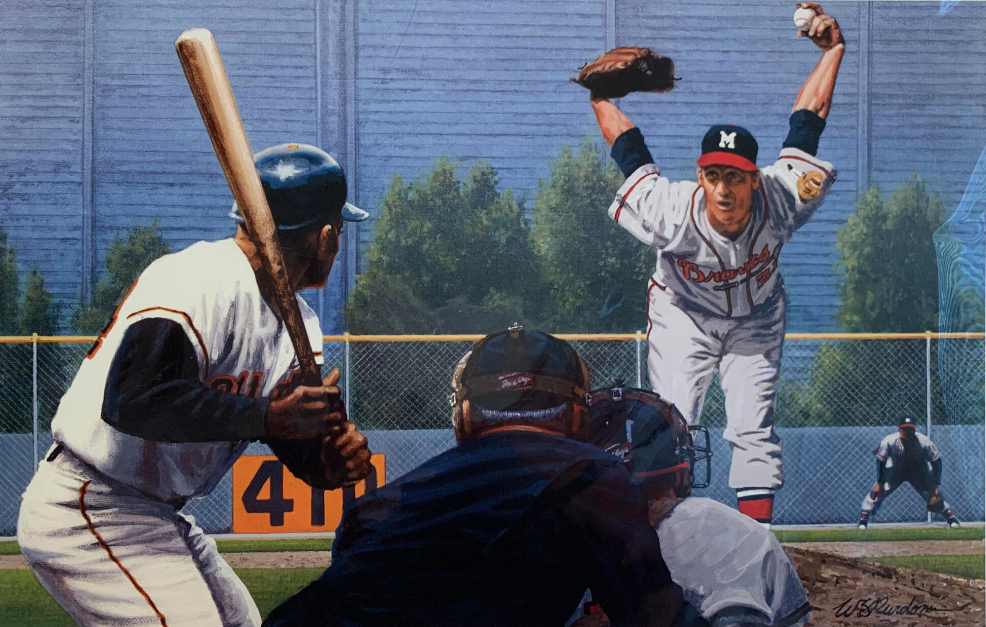 It’s been a while since SM has written about his SurfMaui Giants Museum and ManCave. ™ Today, however, there are two new additions, courtesy of a long time friend (albeit a Yankee fan) who was nice enough to send me them as a present.

Before SM moved to Florida and met our esteemed leader and Blog impresario, Greek Giant, as a widower I ate every single meal out at a restaurant. One of my favorites was Cliff’s on Saratoga Lake, 20 mile north of Albany, where I became a regular, making new friends, watching baseball at least several times a week and downing an enormous slab of prime rib, for which Cliff’s was famous.

I recall being at Cliff’s for several memorable games: Tim Lincecum’s first no hitter, in which I refused to get up from my seat to use the restroom–for fear of bringing bad luck. I bought the entire bar a round of drinks. I was at Cliff’s when Yusmerio Petit broke the record for most consecutive batters retired. Another memorable game there, was when the Giants fell behind 6-0 to the Pirates and I vowed (correctly, I might add) that they would come back to win. One year, the Giants needed a win on the last day of the season to avoid 4th place and finish third. The bartender, Chas Miller, who would always put the Giants game on for me when I arrived remarked that I must be a true fan because I was rooting as hard for a third place finish as if the World Series was on the line. Truly, I spent much of the Golden Era of Giants baseball at Cliff’s.

So it was a great surprise when Chaz sent me two new items for my Mancave (and increasing the burden on my kids to figure out how to dispose of yet more Giants stuff when I’m gone).

The first item is a pristine ticket from Matt Cain’s perfect game, and his baseball card preserved in Lucite

The second is a print of a painting of one of the most famous games in Giants lore–the 15 inning affair of July 2, 1963 when Warren Spahn matched up with Juan Marichal to pitch complete games–each throwing over 200 pitches. The story is told that they kept wanting to take Marichal, then in his early 20’s, out of the game. He supposedly said, “that guy over there (Spahn) is 41 years old. If he can keep pitching, so can I.”

Fittingly the game ended on a Willie Mays home run in the bottom of the 15th. It was also fitting since after a Connor Joe like 0-12 start of his career, Mays’ first major league hit was a home run off of Spahn, and Spahn ended his career with the Giants, going 3-4 with a 3.39 ERA in 1965. That at bat is depicted in the artist signed print.

I don’t know if it is related, but soon after the Giants won the 2014 WS, Cliff’s closed because of the poor health of its owner. They haven’t been back to the World Series since then. So thanks Cliff’s for the prime rib, the great Giants runs, for the friends that I made there, and especially to Chaz Miller for being so thoughtful, both back in the day and for adding two great items to the SMMAMC ™. Stay tuned for more about my Giants museum.