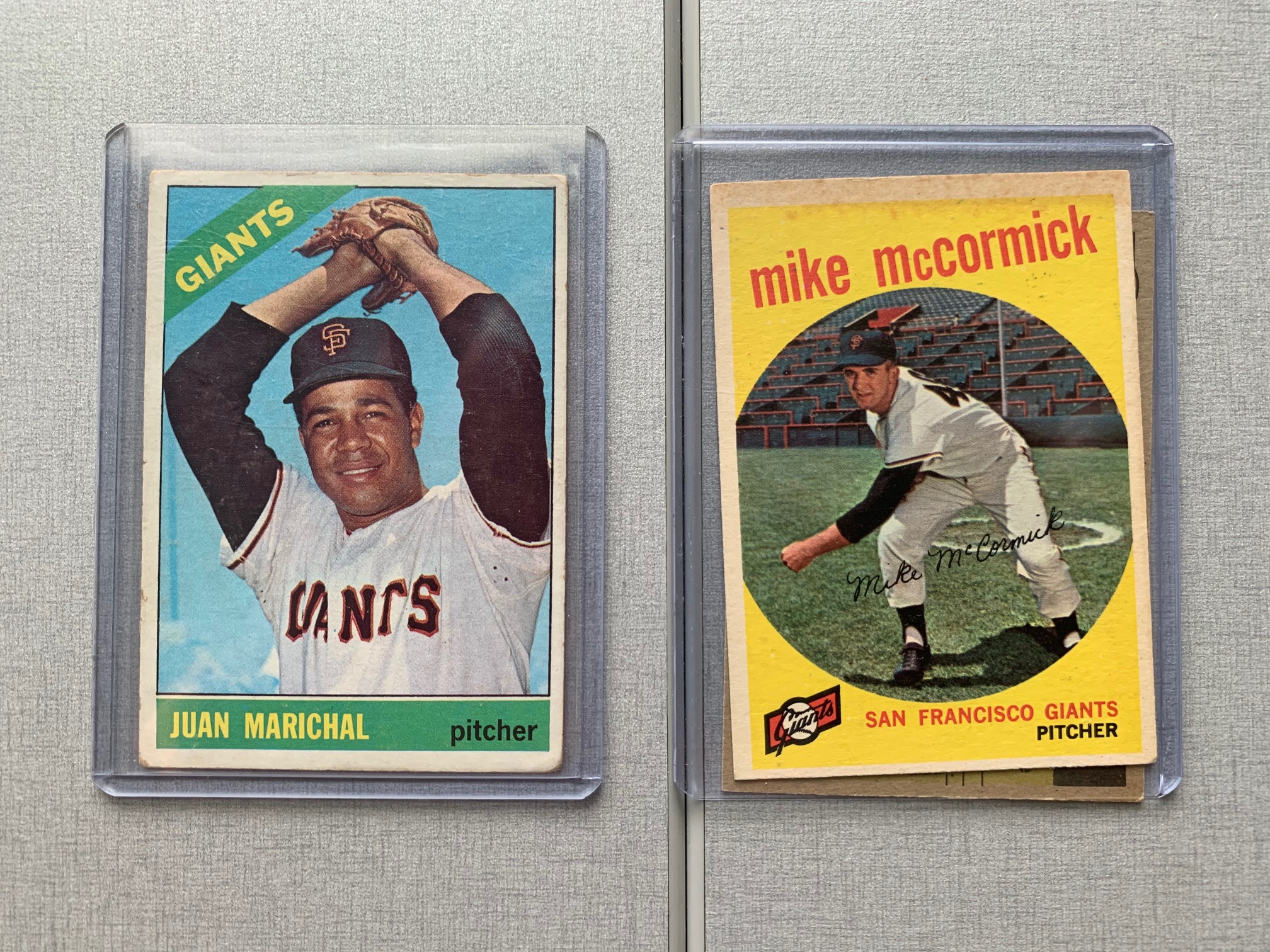 Welcome to the next installment of the SMGMAMC® tour. Today we will focus on the 1962 Giants who, as you all know came within a few inches of winning the World Series. Their miraculous pennant charge and improbable comeback playoff win not only cemented SM as a Giants fan for life, but taught a critical life lesson–anything is possible, run out every ground ball, and never give up hope until the last out is made.

Before going to my collection, and for the majority of you who are too young to remember, let’s recap what happened in that magical few weeks. SM was alive, but way too young to remember the 1951 pennant race, so another installment will feature items from that year.(By the way the last sentence is one of the rare times that the terms SM and “way too young” can appropriately used in the same sentence.) And I have only vague recollections of listening to the 1954 WS on the radio and a Dusty Rhodes home run. However, I vividly remember the last few weeks of the 1962 season, almost as if it was yesterday.

In 1962 the Giants lineup was nothing short of fearsome–led by Hall of Famers Mays, Cepeda, and McCovey in their primes, Felipe and Matty Alou, Jim Davenport, and Harvey Kuenn, a lifetime 300 hitter that most of you more likely remember as the manager of “Harvey’s Wallbangers.” Even though their pitching included two other Hall of Famers, Juan Marichal and Gaylord Perry, Marichal was only 25 that year, and got hurt in the World Series, and Perry was a rookie who only pitched in 13 games that season.

Of course there was also Jack Sanford who had a career season, winning 24 games, and because of all the rainouts in the World Series made three starts on full rest, eventually losing Game Seven 1-0, the only run scoring on a double play grounder. The pitching staff also included Stu Miller (who was also famous for balking when he was blown off the mound at Candlestick in the All-Star Game) later Cy Young winner Mike McCormick, but whose ERA in 1962 was over 5.00, Billy (Digger) O’Dell, and Billy Pierce, as well as aging Don Larsen of World Series no-Hitter fame in 1956.

Looking back at this roster it’s almost impossible to see how the Giants ever lost a game. Of course the Dodgers had won the World Series in 1959 and had equalizers Koufax and Drysdale. In the 1962 season Maury Wills stole 104 bases, Tommy Davis drove in 153 runs, and Don Drysdale and Sandy Koufax struck out a collective 448 batters. The Yankees had a few stars of their own  –three Hall of Famers Mantle, Berra and Whitey Ford (who was approaching Babe Ruth’s record for consecutive scoreless innings in a WS) as well as Maris, Elston Howard, Moose Skowron, and Ralph Terry, who, like Sanford had a career year in 1962.

With nine games to play in the season, the Giants trailed the Dodgers by four games and they would not play each other the rest of the way. After both teams split the next two games with their respective opponents, with eight days left in the season the Giants were still 4 games back with 7 to play and the Dodgers magic number was 5. Both teams lost at home on Thursday, and, as they headed into the final weekend of the season, the Dodgers lead was down to 2 games with three games to go–a magic number of three. The Dodgers lost their final three games to the Cardinals over the weekend. SM distinctly remembers listening anxiously to every pitch on the Cardinal broadcasts Friday and Saturday from Albany, NY on clear channel KMOX from St. Louis. Because of the late hour, my radio was safely hidden under my pillow, moving it all too often to improve the signal, and cheering every pitch. The Dodgers lost on Saturday to former Giant Ernie Broglio, who later became part of one of the worst trades in baseball history when he was dealt to the Cubs for Lou Brock. Meanwhile the Giants were rained out on Friday and split a Saturday doubleheader with the then Houston Colt 45’s, setting up a Sunday where the Dodgers had a one game lead with one to go.  Mays homered in the eighth to give the Giants a life saving win and cut the Dodgers lead to ½ game. When the Dodgers lost a few minutes later, the teams were tied and set for a three game playoff to start at Candlestick.  The Dodgers had lost 4 straight to end the season and hadn’t scored in 21 innings. They were ripe for the plucking.

In those days, of course, there was no internet, and during the day you could not listen to the broadcasts from far away, so you just had to wait by the radio to find out the scores. I always knew that the Giants would catch the Dodgers–at least that’s what I kept telling myself. It was total elation when the Dodgers loss was announced. We were going to go to the WS– I just knew it!

With my Giants fan friend, Gary Shaye, we camped out in front of his living room 19 inch black and white TV to watch the playoffs. Game one was a blowout with the Giants winning 8-0 behind Billy Pierce.  Then the torture began, 48 years before Duane Kuiper coined the term.

In Game 2, at Chavez Latrine, the Giants held 5 run lead going to the bottom of the sixth. (Does this sound familiar to anyone?) Gary Shaye and SM were on the verge of celebrating the impending pennant win. The Dodgers spoiled the party when they scored seven runs in bottom of the inning. The Giants tied it in the eighth, only to lose 8-7, setting up the deciding game, the next day in Los Angeles, – precisely on the 11th anniversary of Bobby Thomson’s “Shot heard Round the World.”

In the deciding Game Three the Dodgers were up 4-2 heading to the ninth and SM and Gary Shaye were hoping for another miracle. Matty Alou pinch hitting led off the ninth with a single and after a force play at second, McCovey walked to put the tying run on base. Felipe Alou walked to load the bases and the Dodger implosion was starting By this time SM and GS were really going crazy with anticipation. As if on cue, Mays hit a single on a wicked liner which was knocked down by the pitcher so only one run scored, leaving the bases loaded with only one out. Cepeda tied it with a sacrifice fly. After a wild pitch and an intentional walk to reload the bases, SM has vivid memories of Dodger collapse on an early version of Runs Thrown In. A bases  loaded walk to score the go ahead run, followed by a Dodger error to pad the lead to 6-4 and the Dodger collapse was complete.

Billy Pierce, playoff game one starter and winner pitched a perfect ninth, and SM has a very vivid memory of the final out, fittingly a fly ball to Mays (who as a rookie had been on deck in 1951 when Thomson homered to win it). I always wondered what happened to that ball?

SM has written previously about the 1962 WS, the finish of which in some ways I’d like to forget. But one of my lifetime sports highlights will always remain the final two weeks of the 1962 regular season and playoffs. SM always believes that the Giants will always find a way to win, no matter what the score or how long the odds. GIANTS FANS NEVER EVER GIVE UP!

The 1962 Giants will always be a special memory to SM, so I decided to collect the baseball cards of the players on that team. Here they are, though some of the cards are for different years: Enjoy.  SM has a confession, however. In preparing this post I realized that I was missing a few minor players, reliever Bobby Bolin, Jim Duffalo, and, Willie Mays look alike Carl Boles.

Before showing you these cards, here is your 1962 Giants trivia question: What was Giants pitcher Billy O’Dell’s nick name? (Hint: If you read this post carefully I gave it above.)  He was a “bonus baby” and never played in the minors. But how did he get that nickname? Here is a link to his bio: https://sabr.org/bioproj/person/0a75f297

See you next time for another installment of SMMAMC.®