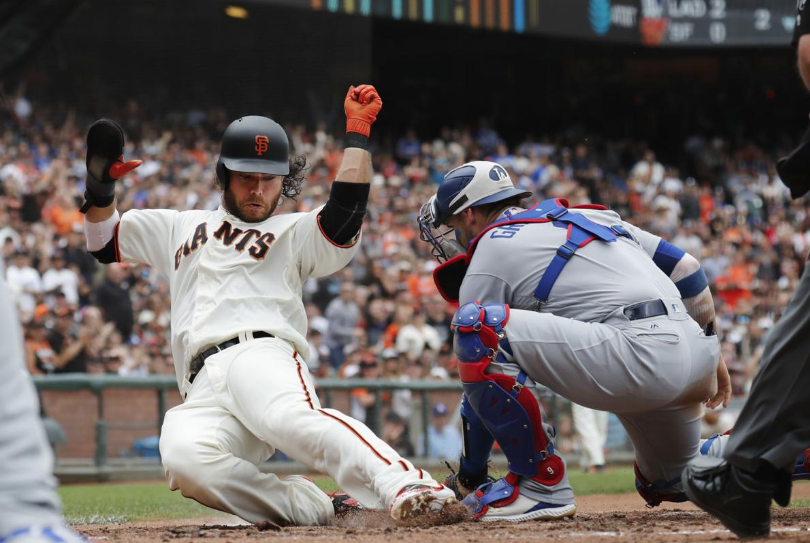 Despite scoring five runs off Mr. April (Clayton Kershaw) and a heroic effort by the beloved Hunter Pence, the Giants failed in their effort to knock the Dodgers out of the playoffs yesterday. Don’t say that SurfMaui hadn’t warned you before Friday’s game, but our esteemed leader and founder of TWG has now run his 2018 in person Giants record to 1-10 (.091). Trying to calculate even the random chance of that occurring (considering three of the games were against the Marlins) makes my head hurt more than Brett Kavanaugh’s after a night out with P.J., Squi, and Mark Judge.

As some here may recall, GG and I spent last playoffless Giants off season by watching the 2010 Playoffs and World Series. We had already decided to that to spend thew off season watching the 2012 playoff run, culminating in Sergio Romo striking out Miguel Cabrerra. However I am now having second (and third and forth) thoughts about this idea. Given Greek Giants abysmal season record, I am concerned that if he watches it, in an alternative universe kind’ve way, Sandoval instead of hitting three home runs in Game 1, will strike out three times, we will go on to be swept, and Major League Baseball will take back our 2012 World Series Trophy. Such is the power of the GG Curse.

The Giants— shades of Joe Morgan circa 1982– still have the opportunity to deprive the Dodgers from winning the NL West today and ignominy of seeing them celebrate on our home field and wrecking the outfield grass even more than it is. So as a concerned citizen, longtime Giants fan, and unabashed Dodger Hater, I have come up with a foolproof plan to prevent a Dodger win today–and no, it did not involve hiring 1,000 bagpipers to play all night in the hallways of the Dodgers hotel.  I’m sorry, even I could not go that far.

First, I have banned Amy G from any in game interviews. Second, I told GG (in a very convincing voice) to sleep in today, because that in order to accommodate television, the game does not start until 7 p.m. PDT (that is late enough to cover the possibility of extra innings). Third, I told him that because of the grass problem in the outfield at AT&T,  the game today was being played in Oakland. And finally, in to cover all bases, (so to speak) I have ordered an exorcism of GG to begin at noon today.