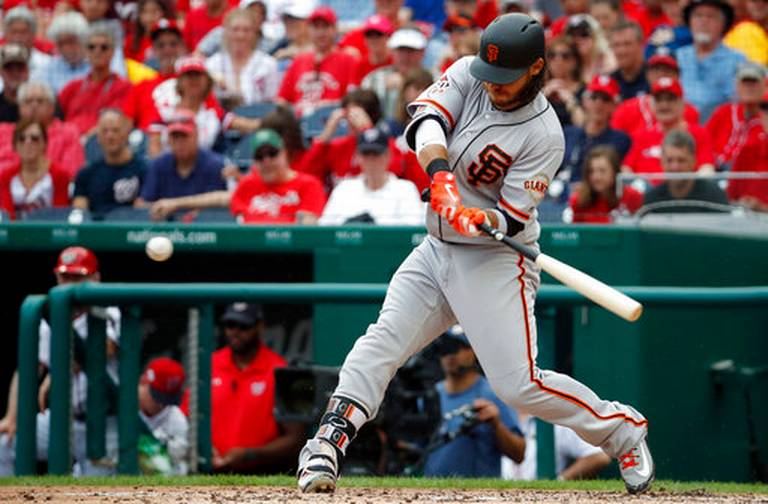 Well, the Giants did more than just survive the first leg of their third, three city road trip of the season. They took two out of three to the first place Nationals despite being matched up against their top three pitchers, including Max Scherzer who was 10-1 with an ERA under two coming in. What he didn’t count on was a blistering Brandon Crawford with 4 hits including the game deciding two run homer as well as two doubles for good measure. That and Alen Hansen in the first game made for an exciting weekend. Even the middle game was winnable, had there been a key hit.

The long awaited Strickland-Harper match up turned out to be a dud with a weak ground ball to lead off the ninth. I was wondering if Bochy would leave in Watson to face the lefty Harper to lead off the inning and avoid that confrontation, but instead he stuck with the plan. Holland–helped by a pickoff was very good. It’s the second time this month on the road that he pitched 5 shutout innings on a Sunday game to end a series (also against the Pirates, and I was present at both.

The bullpen was lights out assisted by a caught stealing which seemed to take the wind out of them. Bochy was masterful in his handling of the bullpen–not just in this game but in the entire series.  As I posted, had he (as some were on the post were  critical) used his front line relievers when we were behind on Saturday, their availability and effectiveness on Sunday when they were needed would have been compromised. As fans, we need to remember that the manager needs to manage for the long haul and not just the immediate situation. Sometimes that means resting someone or not using the best immediate matchup.

A great win today. Coming into this road trip, my goal was win one in Washington and at least 1 in LA, and come home at .500. Now lets get greedy. After this road trip we have 51 games at home and only 39 on the road. Belt is coming back inanother couple of weeks and perhaps Cueto shortly thereafter.  So ,llet’s go home OVER 500 and turn on the afterburners. Dodgers and NL West, eat our dust as we leave you behind.

Just a few odds and ends before heading to Miami for a TWG reunion with GG and the Marlins series. Look for us. We’ll be in the front row down the first baseline wearing our Let Pablo Pitch shirts.

The walk from the Metro stop to the ballpark is like a middle eastern bazaar–people yelling at you to buy water and other stuff. And the bag check lines are very lengthy. So when you come here for the Playoffs in October leave enough time.

I wonder if Donald Trump will invite the Giants to the White House when we win the World Series this year? Maybe if we promise to bring Kim Jong-Un?

By the way, this game ended my 13th scorebook since I abandoned loose scorecards in 1992. That’s 325 games in my scorebooks. Book 14 starts tomorrow.

See you in Miami.