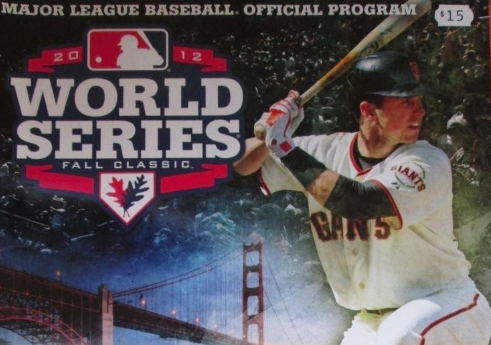 In today’s tour of the SMGMAMC® we will focus on some Giants World Series Programs and a few–but by no means all– of SM’s other World Series items.

As did many of you, SM has attended all of the Giants home World Series games at Willie Mays Field since 2002. I had a ticket for game four in 1989 at Candlestick, but we know what happened then. However, unless your name is Mike Murphy, I rather suspect that SM is one of the few individuals on the planet who attended both the final game of the sweep against in Detroit in 2012 AND also attended 1962 World Series on the road. Indeed, unless your name is Willie Mays or Felipe Alou, I would guess that there are very few of us who saw the Giants on the road in both the 1962 and in the 2012 World Series. So here some of my World Series collection a few stories behind them.

First up is an unrelated item. For some reason I have a 1961 Yankees scorecard which as you can see cost 15 cents. One of the reasons that I became a Giants fan was to torment my father who, like most people who lived in Albany, New York, were Yankees fans. So as a life-long Dodgers and Yankees hater, the scorecard wasn’t worth 15 cents, but I suspect might be worth more than that now. Who knows (or cares)? Now let’s get to the more important stuff.

As I’m sure most of you I would just as soon forget about the 2002 series– at least after game 5. But here is the program cover anyway.

In 2002, the Giants played the Yankees at the original Yankee Stadium during the regular season. SM missed the Saturday game in which Bonds hit a titanic home run to right field upper deck which off the bat Jon Miller described as “headed for New Jersey.”

Instead of attending that game, however, SM went to the Sunday game in which Bonds faced off (in a manner of speaking) with future co non-Hall of Famer Roger Clemens. After seeing what Bonds did the day before, the coward Clemens walked Bonds 3 times and hit him once–so much for the steroid effect on Clemens. In all, the Yankees walked Bonds 4 times plus hit him and, SM’s Giants losing streak of 40 years at Yankee Stadium continued. The 61-year Yankee Stadium losing streak (and you think that the Greek Giant Curse was bad) was broken on Mariano Rivera Day on September 23, 2013 when Adrianza hit his first big league home run and Nunez and Perez (who grew up in the Bronx) threw out consecutive Yankee runners at the plate in the Yankee eighth inning after the Giants had taken the lead on Sandoval and Abreu doubles in the top of the inning. Here are SM’s scorebook pages from those two games.

I have two different covered 2012 WS programs pictured below–one at time of the game, and a “collectors” edition obviously after the Series (Apparently all one has to do is say “collectors edition” and SM is all over it.) Here are the Programs:

The 2012 WS against the Tigers is also famous for three of SM’s all time most famous clever quips (Baseball Edition), or at least I think so. Obviously, Games 1 and 2 were played in San Francisco attended by SM and SM’s nephew from Palo Alto. In game two, when Prince Fielder tried to score from first on a Delmon Young double, SM observed that he was “out at the plate by 75 pounds,” and instead of the Kentucky Derby, Fielder’s “dash” to home was “the most exciting two minutes in sports.” Here it is:

After Game 2 my nephew and I decided that we just had to go to Detroit to see the sweep. So, thanks to all my traveling and, therefore elite status with Marriott, I was able to score a room at the MLB headquarters hotel on two days notice, and thanks to StubHub we got tickets to game 4 right behind home plate–albeit in the next to the last row in the upper, upper, upper deck. (I think that we were still in the stadium, but it was close.) Trust me when I say it was freezing and made the coldest night at Candlestick seem like Miami Beach—except for the absence of bikinis. In the top of the tenth Designated Hitter Ryan Theriot (of all people, so “who says Bochy wasn’t a genius”) was on second base when SM said to his nephew, “as hot as Scutaro is, I’d rather have him at the plate in this situation than Babe Ruth.” (Of course, at this point Babe Ruth had been dead for more than 60 years so it wasn’t really a fair comparison, but the point was the same.) Hurricane Sandy was also bearing down on Detroit, and after the Giants took the lead, and no one, even the Tiger fans behind us (and there was only one row behind us) wanted to come back for a Game 5. However, the sweep was critical because if the Tigers won Game 4 they would have come back with Verlander on full rest in Game 5 and with the likely postponements, the Tigers pitching would also have at full strength with Verlander again probably pitching on full rest. (Who knew then that Verlander would be a bad WS pitcher or what MadBum could do on two days rest just two years hence?) As I said, it was really cold –right up until the point when Romo “froze” Cabrerra with a fastball to end the series. All of a sudden, it was like the sun came out and it was warm!

The Detroit Tigers gave fans a Tigers rally towel  (not pictured) which they handed out before the game. Also shown is SM’s scorebook page and a photo of the on-field celebration. What makes these special–at least to SM—is that both were eventually autographed by Jeremy Affeldt at the 2012 Anniversary event.

For some reason I do not have a 2014 WS Program–though as you will see on another day, I have plenty of other cool 2014 WS stuff. Of course, I have the scorebook pages. But instead, next is something that I’ll bet very few of you have. It’s my scorecard from Game 5 of the 1962 World Series, which, unfortunately the Yankees won on a Tom Tresh home run in the eighth. My father, an accountant (and Yankee fan), had a client who got us tickets and we were seated about ten rows behind the Giants’ dugout. We drove to the game from Albany in a persistent drizzle. I vividly remember Willie Mays playing catch to warm up right in front of me. The game was rained out, so we stayed over at my Grandmother’s studio apartment in the Bronx. The sun was out the next day, and I recall jumping up when the Giants took the lead on a Jose Pagan home run. The man in the suit, tie, and business hat sitting next to me got his revenge, unfortunately when Thresh homered. It was a long ride home.

When the Series returned to San Francisco, the Giants won game six to set up the heart-breaking ending on McCovey’s line out in game seven. (For the record SM would have sent Matty Alou on the Mays double that preceded it.) Because of all the postponements, game five was the second of three full rest matchups between Ralph Terry and 20 game winner Jack Sanford. (Marichal was hurt in Game 2, I believe). In game seven, the only run scored in the game was on a double play ball.

Here is my scorecard from that game.

It cost 50 cents. As you can see it has the lineups in it, but no scoring. Why, I don’t know, because I specifically remember scoring that game. The only reason that I can think of as to why this scorecard is blank is that this scorecard was from the rained-out game 5. (Notice the spots on it, and also, the date filled in is October 9, 1962, while the actual date that the game was played was October 10.) So, from my memory of scoring–I distinctly remember gleefully putting in the Pagan home run–as well as the astute detective work and deductive reasoning cited above, it leads me to conclude that I had two scorecards, and somehow over the last 58 years I lost the scored one. Bummer!

That’s it for today’s tour. Stay tuned for more of the SM Museum and Mancave Collection. I hope to be adding to my World Series Collection in 2021. See you all at the WS Parade. In the meantime , please stay safe and no more walks by Giants pitchers.