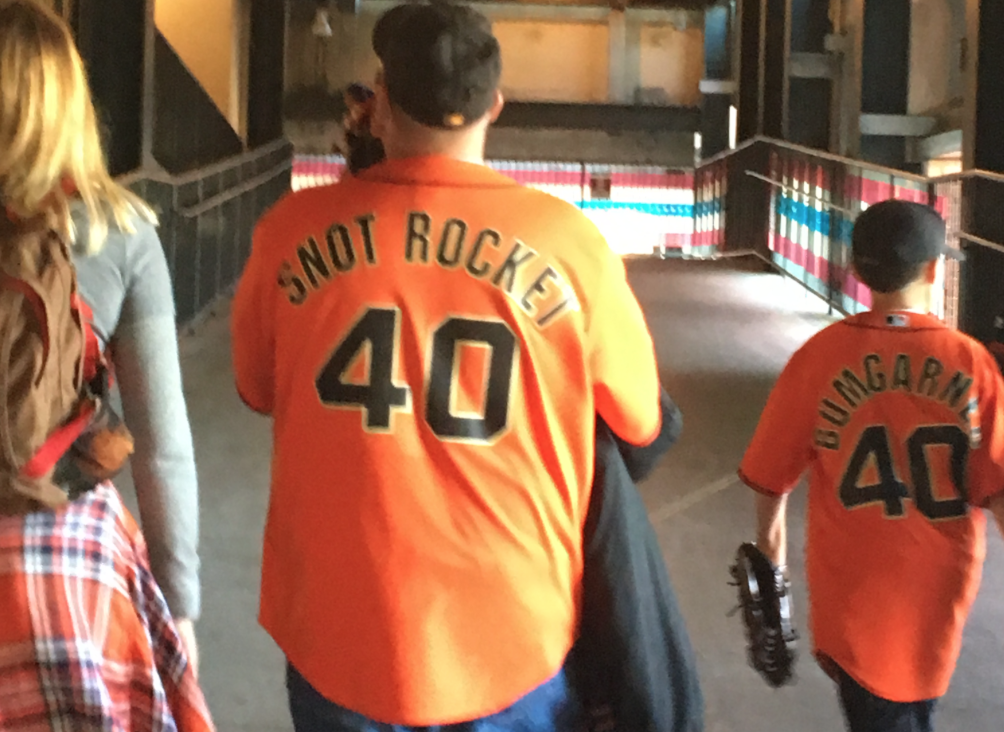 “Baseball breaks your heart. It is designed to break your heart. The game begins in the spring, when everything else begins again, and it blossoms in the summer, filling the afternoons and evenings, and then as soon as the chill rains come, it stops and leaves you to face the fall all alone. You count on it, rely on it to buffer the passage of time, to keep the memory of sunshine and high skies alive, and then just when the days are all twilight, when you need it most, it stops.”

I am sitting in the United Club at SFO waiting for my flight back to Florida–and the two quotes above perfectly describe my feelings today as one of the few non media Giants fans, I suspect, who actually attended each one of the Giants post season games this season. The trip was marked by the highest highs–the Bumgarner shutout and Gillespie home run to beat the Mets and the improbable comeback and extra inning walk-off win versus the Cubs on Monday. And obviously it culminated in the lowest lows–the Baez home run to spoil a Cueto masterpiece and “Nightmare on Bullpen Street” season ending game on Tuesday.

As previously reported, I never intended to make this trip. Fortuitously as Hurricane Matthew was bearing down on my house–and even more fortuitously just missed it–I decided to evacuate at the last minute with the side benefit of going to the wildcard game in New York. I got to witness the post season Bumgarner mastery in person, as well as the beginning of Gillaspie’s post season explosion. It was euphoric.

I had intended to go Chicago win or lose to see my kids, but it was way more fun to go after a win. I really felt that we had another run in us, and it watching the Cueto gem–peering between the ubiquitous beer vendors clogging the aisles and the standing fans in front of me almost all the time. The Baez home run was a gut punch and obviously there wasn’t much to cheer about offensively except for a blown call on Hernanzdez that likely would have led to a run on Posey’s double–which, off the bat–I thought was gone.

Game two was disappointing and I really started to hate the arrogance of the Cubs fans–who despite having won nothing in 108 years (so far)– are convinced that every break goes against them– and are just waiting for an excuse to lose.

Game three of course, was the high water mark–unless you are going to count entering the ninth in game four with a three run lead. Conner Gillaspie’s go ahead triple off Chapman in the eighth lit up AT&T Park and was Ishikawaesque. Between that, his home run versus the Mets and his four hits in Game 4 and several outstanding defensive plays, I was beginning to think that either he had sold his soul to the devil or had come to us wrapped in a blue and red blanket from the planet Krypton. Then the roller coaster of Romo coughing up the home run to Bryant, followed by the catch in right field to rob Posey in the ninth and eventually the Panik double off the wall created total euphoria and the absolute conviction that we were destined to win another World Series.

And then there was Game 4, which started out with so much promise and was within our grasp until the ninth inning disaster. It was a real rollercoster ride of emotions from the beginning to the bitter end.

Still I’m glad I went, and all I can say is that I’m looking forward to Spring Training in only 4 ½ months where our starting pitching is likely to be among the best in baseball. Having Nunez for the whole season will help too. Add a big bat in the outfield and retool the bullpen and we’re good to go.

Thanks to all for the encouragement on my trip. Sorry I couldn’t root hard enough for another World Series. This trip showed me just how hard it is to win one–much less three in a few year period. So, let’s go get’em in 2017!!!