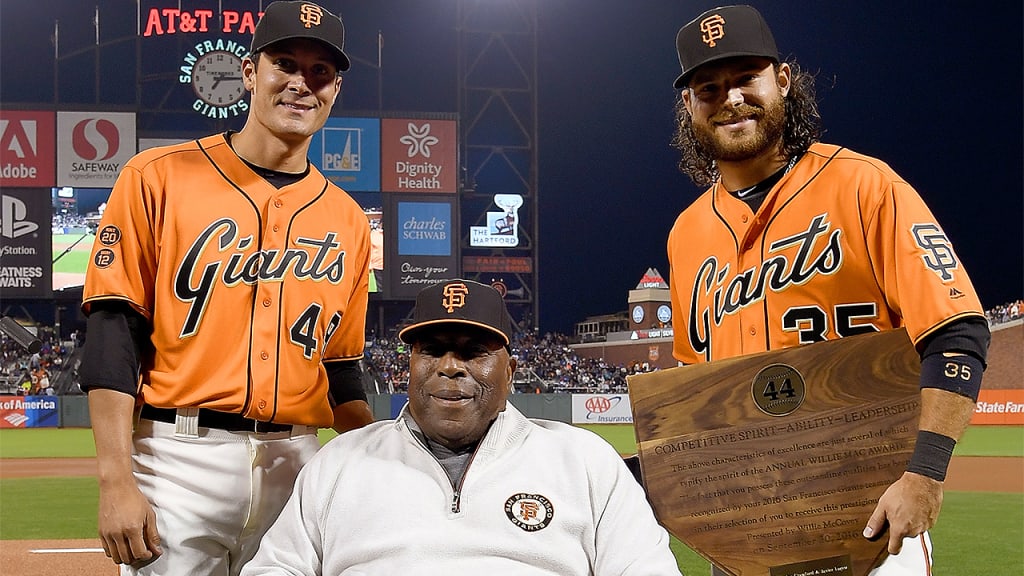 The Willie Mac Award is named for Willie McCovey, the Hall of Fame first baseman who played for the Giants from 1959 through 1973, then finished his career with us from 1977-1980. Willie is one of the few MLB players to have played in four decades. He was the 1959 Rookie of the Year, and he was an everyday presence in our lineup throughout the 1960s. By the late ‘60s “Stretch” was renowned as the most feared slugger in the National League. He won the NL MVP in 1969, and was the strong, quiet presence and a leader of our team until Horace Stoneham was forced to trade him (and other Giant icons Willie Mays and Juan Marichal) in an early ‘70s salary dump. Willie finished his career with 521 HR, 1,555 RBIs, and a career OPS of .889. He was a first ballot Hall of Fame inductee in 1986.

Willie retired in midseason 1980 and soon thereafter the Giants instituted the Willie Mac Award, which at the end of each season would be bestowed upon “the San Francisco Giants player who best exemplifies the spirit and leadership consistently shown by the San Francisco legend throughout his career.” The first few years of the award it was usually awarded to one of the best players on the team. The first year (1980) Jack Clark was honored. In 1981 Larry Herndon, another strong, silent player liked and respected by his peers, was the winner. In 1982 through 1986, popular, productive and veteran Giants players won it: Joe Morgan, Darrell Evans, Bob Brenly and Mike Krukow (back-to-back in 1985-86).

In 1987 our Giants won their first NL West division title since 1971. The 1987 team featured the “You Gotta Like These Kids” group, along with a strong veteran presence. The winner was Chris Speier, who broke in with the Giants in 1971, and after being traded in 1975 came back for the 1987 season and finished his career with the Giants in 1989.

The spirit of the award evolved a bit to include some of the player’s personal struggles and tragedies. Jose Uribe, our solid and lovable shortstop, lost his wife during childbirth in 1988, and his teammates honored him with the WMA. In 1989, Dave Dravecky fought back from major arm surgery caused by cancer to return to the mound and against all odds pitch again. He broke his arm in his next start (it was eventually amputated), but he was a no-doubt winner that year. In 1990, Steve Bedrosian’s family endured a childhood cancer struggle, and Bedrock was rewarded for his commitment and professionalism through that very trying year.

In 1991-1993, everyday dependable players Robbie Thompson, Mike Felder and Kirt Manwaring were the winners. There was no WMA in 1994 due to the player’s strike. In 1995 we had our first “tie”, as “the Marks”—Carreon and Leiter—shared the award. The 1996-2000 winners were Shawon Dunston, J.T. Snow, Jeff Kent, Marvin Benard and Ellis Burks. Snow, Kent and Burks were trade acquisitions that made immediate and significant contributions to our lineup, dugout and clubhouse.

In 2001, we had another tie and more personal struggle. Mark Gardner, whose wife lost a long battle with cancer, and Benito Santiago, who made a triumphant return to MLB after a serious automobile accent that nearly cost him his life, were co-winners. In 2002, David Bell was acquired to play 3B and add a veteran presence, and he did exactly that. He was traded after that season, becoming the first WMA winner to play only that one season with the Giants. In 2003 Marquis Grissom was the winner, and in 2004 J.T. Snow won it for the second time, joining Mike Krukow as the only multiple winners. In 2005, Mike Matheny joined the Giants, helped remove the “A.J. stink” from the team, solidified the catcher position and won the WMA. In 2006 Omar Vizquel joined the Giants. His effervescent personality and elite defensive skills were a big addition to a struggling and declining team, and he was another no-doubt WMA winner.

In 2007-2008, Giants Nation did not have much to be excited about, but Bengie Molina’s strong, sturdy leadership and mentoring of his young pitching staff won him the WMA both years. He joined Krukow and Snow as the only multiple winners. In 2009, our Giants were once again contenders, primarily due to a strong pitching staff. Matt Cain, one of our two ace starters (along with Tim Lincecum) won it. Cain was the strong, silent partner to Timmy’s explosive and unusual arsenal that won him his second straight Cy Young Award. Cain was rock steady all season and a very deserving winner.

Then came 2010. Our first San Francisco Giants World Series Championship! There were MANY deserving candidates on this team, but the sentimental favorite was Andres Torres. After twelve seasons in the minors, Torres carved out a spot on the Giants in 2009 and had a career year in 2010. His talent, effervescent personality and good guy character were integral ingredients in that magical season. In 2011, Ryan Vogelsong came back to the Giants, and his wonderful story of patience and perseverance was truly an inspiration. He was also an all-star and another no-doubt winner. 2012—Buster Posey. How could it be anyone else!? Coming back from the horrific injury to win the batting title, MVP, and lead his Giants to another World Series championship. All Hail the Buster!

In 2013, Hunter Pence in his contract year, had an outstanding season. Our Giants struggled that season, and at the trade deadline there was discussion of trading Pence (and a few other pending free agents). Hunter lobbied hard to stay on the Giants and was honored with the WMA at the last Orange Friday night home game. The next day he signed a five-year contract, eschewing the free agent market and committing to the Orange and Black for five years. In 2014, Madison Bumgarner put the team on his shoulders and strong, sturdy left arm, leading us to our third World Series Championship. In 2015, Matt Duffy stepped up to take over 3B (from the departed Pablo Sandoval) and became the only rookie to win the WMA. In 2016, the Giants honored their all-star shortstop Brandon Crawford and long-time reliever Javier Lopez, who had announced his retirement, with the third “tie” in WMA history.

2017 was a year most of us would like to forget, as our Giants finished in last place with 98 losses. Very difficult season, but shining through those struggles was Nick Hundley, our reserve catcher who supported Buster and worked closely with the pitching staff. In 2018, Will Smith, a reliever the Giants acquired during the 2016 season but was out with Tommy John surgery all of 2017, was the winner. He was also the last winner to be presented the award by McCovey, who passed away on October 31 that year.

In 2019, the Giants acquired Kevin Pillar early in the season. Pillar played a strong CF and was an everyday strength for an up and down, inconsistent team. Pillar became the second WMA winner to play only one season with the Giants. The nearly forgettable 2020 Covid season gave us a breakout year by Mike Yastrzemski, who carried the Giants into a possible postseason berth until late in the season and was awarded the Willie Mac.

The glorious, magical and unforgettable 2021 season gave us many deserving candidates for the WMA. Our established stars: Buster, the Brandons and Kevin Gausman, breakout starter Logan Webb and closer Jake McGee. Our Giants had fifteen players with more than 300 plate appearances! But the late spring training, unheralded trade acquisition LaMonte Wade, Jr. came on strong in the second half. “Late Night LaMonte” produced multiple crucial late-inning hits to help us win games and hold off the Dodgers. The groundswell of support for LMJ seemed to start on TWG and then spill into the dugout and clubhouse.

For 2022? I think most here know I’m all in on Wilmer Flores. If you read the definition of the award in the second paragraph, seems to me Wilmer is a lock for this year’s award. Thairo Estrada is MyGuy, he’s had a breakout year and is also a deserving candidate. Part of Wilmer’s credentials is his communication with and mentorship of his fellow countryman. I suggested earlier on the blog that another tie would be cool—the Venezuelan Brothers winning it together and coming back as essential members of the 2023 team.

Who do you like? It’s been a difficult year, but that last Friday night home game gives us something to celebrate. Looking forward to Willie Mac Award, Orange Friday, September 30, 2022.