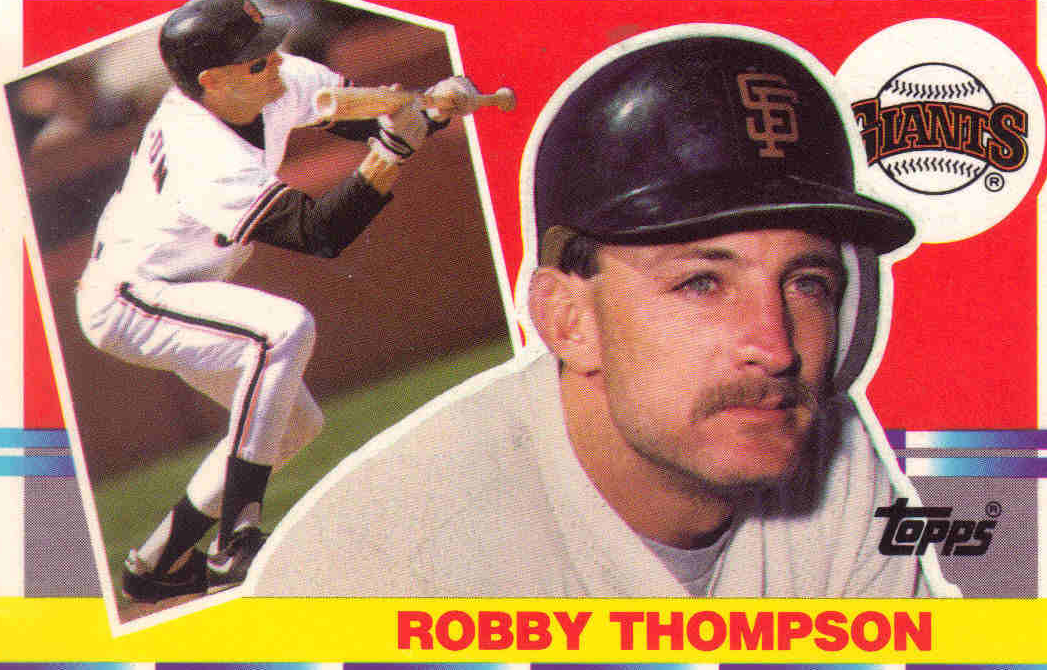 In 1986, our Giants bounced back from a last place finish in 1985—the only 100-loss season in the history of the franchise—to win 83 games and finish in third place. My wife and I were very fortunate to spend much of that year watching our guys play. This is our story of that most wonderful year.

Part one of our story begins in July 1985. Mrs. TF and I were living in Southern California, and we were married late that month. Work responsibilities precluded a proper honeymoon, so we took a long weekend and drove to Central California to visit family and friends, and take in a couple of Giants games. Mrs. TF wasn’t into baseball when we met, but she caught on fast and became quite the dedicated Giants fan.

Through a business connection I met Mike Murphy, the Giants legendary clubhouse manager. He was very cordial and gracious, and during our visit to Candlestick that weekend I was allowed clubhouse, dugout and batting cage access before and after that weekend’s game vs. the Braves. They say you have to have a lot of little kid in you to play baseball, and I felt like that little kid as I took pictures, got autographs and hung out with the guys.

Unfortunately, given the way that season had developed some of those players had mentally checked out, more concerned with the after-game party, or maybe their upcoming off-season plans, than winning baseball games. Guys arrived late and didn’t show much effort or concern as to whether they won or lost. I’ve always said that 1985 team was the worst in SF Giant history, and what I saw over those few days planted those seeds of discontent. I did have some great conversations with a few of the veteran players who were still working to win, such as Bob Brenly, Chili Davis, and Vida Blue.

As I was exiting the clubhouse to go to our seats I ran into Mike Krukow. I had a ball that Murph had given me, and most of the guys with whom I spoke signed it. I asked Mike if he would sign. He did, and we spent a few minutes talking baseball. I told him I was a diehard Giants fan for the past 25 years, and how much it hurt me to see our team wallowing in last place. Krukow then said something I’ve never forgotten: “this team is not as bad as it looks and plays right now. We’re only a couple of players away from being a contender…a couple of additions, and maybe more than a couple of deletions.” Kruk won the Willie Mac that year (and in 1986 as well), and he had tons of cred in that clubhouse. That conversation gave me a ray of hope that maybe things would be better next year.

A few weeks later the Giants fired GM Tom Haller and manager Jim Davenport, and hired Al Rosen and Roger Craig. Over the last month of that awful 1985 season we began to see signs that a new era was beginning, and happier times would indeed soon follow. Little did we know we were about to enjoy an unforgettable San Francisco Giants season!

1986 was indeed a fresh start and a much better year for our Giants, compared to 1985. Many of last year’s players were traded, waived or released. Fresh, young faces arrived. Rookies Will Clark and Robby Thompson, second year infielders Jose Uribe and Chris Brown—“you gotta like these kids”—and we certainly did. The Giants got off to a quick start, and came to L.A. in the first week of the season. We attended all three games, the Giants won two of them, and we were both excited by what we saw. The blend of young talent with a core of proven MLB players was a great mix. Roger Craig taught all his pitchers the split-finger fastball and we were off and running.

Mrs. TF and I committed to attend all Giants games in L.A. and San Diego that year, and maybe make a trip or two to San Francisco to watch Giants games with our great fans. Our first trip of the year to SF came a week later, as the Giants swept a four-game series vs. the Padres. Memorial Day weekend we drove up to The City for our second trip, a series vs. Montreal (Mrs. TF was born in Canada, and wanted to see their NL team up close). During that trip we decided for our vacation this year we would take a road trip with the Giants. We selected a mid-July swing to Chicago and St. Louis. We made our plans and looked forward to seeing two cities we had not visited, and watching our beloved Giants.

The Giants continued to play well, and were starting to get national attention. The Houston Astros were also playing great baseball, and quickly became the team to beat in the NL West. Looking ahead we saw a four-game series—featuring a Sunday doubleheader—against the Astros in late June. This was our third road trip of the season to the Bay Area. The Astros arrived in SF on June 20 in first place, with a 2 ½ game lead over us. The Giants swept that series, and finished that doubleheader on Sunday June 22 in first place! After game one of the DH, the capacity crowd was standing and cheering. I looked up to Al Rosen’s box, and made eye contact. I gave him a virtual fist-pump, and he gave me a thumbs-up! Cool moment for sure!

Soon thereafter it was vacation time. Chicago here we come! Getting off the El at Addison and Clark, after the train passed, it looked to me like we were standing in CF. Entering the park, I was amazed by the lower grandstand being so close to the playing field. You could see and feel the tradition and beauty. This was prior to the installation of lights, so all games were played during the day. We split that series, and the highlight of our Chicago visit was the opportunity to have dinner with our pal Mike Murphy and David Lowenstein (assistant clubhouse manager and Al Rosen’s stepson). Also joining us for dinner: Vida Blue and Chili Davis! We got to know the players a little; we talked baseball, and enjoyed a nice dinner. What a great evening. Murph told us to bring our bags down to the lobby of the hotel the next morning, and he would ship them to St. Louis along with the player’s luggage. He also showed us how to take the El directly from Wrigley to O’Hare.

St. Louis was not nearly as much fun as Chicago. The Cardinals swept the three-game series, and the Cardinals fans were nasty. Our seats were in a group reserved for Giants family and friends, and the fans ragged on us every night. That was the beginning of my intense dislike for the St. Louis Cardinals. Game two of the series was one of the most memorable games of the year. Vida started and got shelled. The Cardinals scored eight runs in the fourth, and took a 10-2 lead. In the fifth inning, Vince Coleman reached base, and stole second. Then he stole third. With an eight-run lead. The Giants dugout went nuts—five or six of them were standing on the top step, yelling at Coleman. He then tried to score on a short wild pitch, and Juan Berenguer took the catcher’s throw and applied a hard tag on Coleman for the third out.

Bottom of the seventh, Coleman comes to the plate. Frank Williams (our sidearm reliever) brushed him back, and home plate umpire Bob Davidson issued a warning to both pitchers and managers. Williams nodded OK, I’m cool… and then fired the next pitch right into Coleman’s knee. It was ON! Benches emptied, Herzog and Craig squared off, and Chris Brown tackled Coleman. One of the Cardinals tackled Krukow and injured Kruk’s shoulder (Krukow would subsequently miss five starts, which cost us dearly). The Giants scored late to make it close, but lost the game 10-7.

After the game, we went to the bar in the Giants hotel. A few other Giants fans were there, including three young guys who were driving cross-country to Cooperstown to attend Willie McCovey’s Hall of Fame induction later that month. We bought them a couple of beers and gave them some food and hotel money for the balance of their trip. Soon thereafter a few of the Giants players came down to the bar as well. They were cordial, bought a couple of rounds, and discussed the game, series and current road trip with the handful of fans that were still there. Suddenly Chili Davis stood up and said “Hey, SportsCenter is on right now. Let’s go watch highlights of the fight!” We all went out into the lobby, gathered around the one TV showing SportsCenter, and watched the entire episode together. The players were really into it. Another unforgettable moment!

Mrs. TF and I made another road trip to SF later that year, and attended all the Giants games in L.A. and San Diego. During one of the games vs. the Dodgers, Kelly Downs finished the win, and as he walked to the dugout I ran down to the first row and hollered out “great work Kelly Downs”. He looked up at me, tossed me the game ball, and said, “thanks, man.” I still have that ball. All in all that magical year, we attended 38 games in five different cities. The Giants faded at the end, and Houston won the NL West, clinching against us as Mike Scott threw a no-hitter. Nonetheless, it was a GREAT year. Our Giants won 83 games, a 21-game improvement over the previous year! In 1987 we won the NL West and began a three-year run that led to the 1989 World Series vs. the A’s.