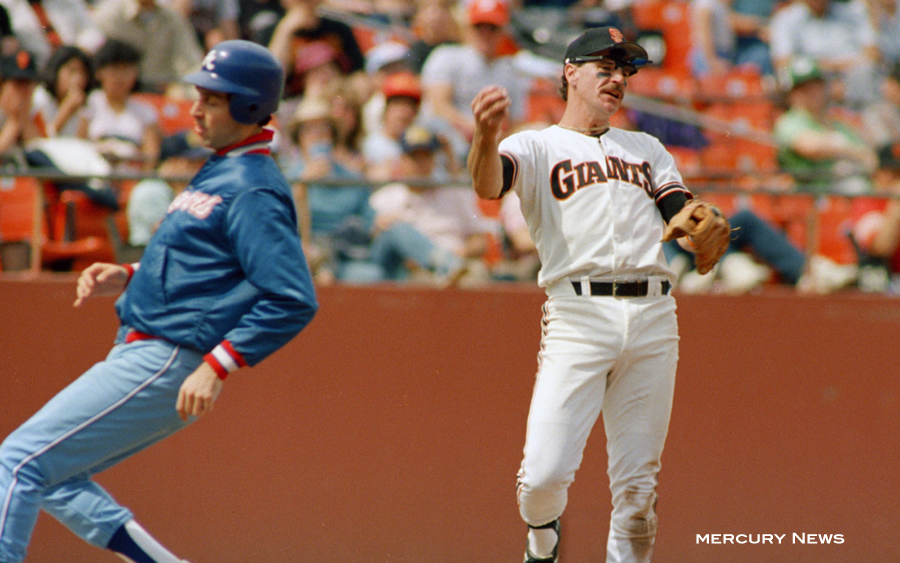 This game was one of the most memorable games played in the 40-year history of the Giants at Candlestick. It featured the Atlanta Braves vs. our Giants on September 14, 1986. I have a VHS tape of this game in my sports memorabilia collection, and I have watched this game many times.

The 1986 season had been a very good one for our Giants. Coming off a 100-loss 1985 season and what I believe to be the worst-ever SF Giants team, they had battled to stay in contention into early September. It was Will Clark, Robby Thompson, Jose Uribe, Chris Brown—You Gotta Like These Kids! It was redemption for a group of veteran players who did not deserve to spend their prime years playing for poor teams. It was one shining season for Mike Krukow, who won his 20th game on the last day of the season and who along with two teammates (Brown and Chili Davis) made the all-star team. It was the clutch pinch-hitting by Joel Youngblood and Harry Spilman, and it was Humm-Baby Roger Craig and his split-finger focused pitching staff that made that year so memorable.

1986 was also a great year for my wife Debbie and me. Debbie got into Giants baseball because of me, but when she did she really got into it. We lived in Southern California from 1977-1986, and we went to every Giants/Dodgers game at Dodger Stadium in 1986. We decided to expand our game plan to include at least two of the series in San Diego, and at least three drives up to San Francisco to watch the Giants at Candlestick. I knew the Giants Clubhouse Manager Mike Murphy through a business associate, and he left us tickets for all of our “road games”.

Early in the season we decided to spend our summer vacation with the Giants. We planned a road trip to Chicago and St. Louis, and had a great time during a seven-game trip. Saturday night in Chicago, having dinner with Vida Blue, Mike Murphy, Chili Davis, and David Lowenstein (clubhouse guy, Al Rosen’s stepson)—good times and good memories, for sure. The second game of the Cardinals series included a beanball battle. We ended up in a bar in the Giants hotel, watching the highlights on SportsCenter with many of the players. All in all we attended 35 games in five cities that year, and had a great time doing it.

The 1986 season had some down spots as well. The Giants sustained painful losing streaks earlier in the season, and lost Will Clark and Jeffrey Leonard for extended periods due to injury. Even though they had made tremendous strides forward, the team was not yet strong enough to win the NL West. Houston won it pulling away in September. During the 1985 season, I was fortunate to be in the clubhouse in August, prior to a meaningless game vs. the Braves. Krukow was the starter that day, he was alone in the clubhouse, and he was willing to talk a bit. He was very candid: “we’re only one or two players away from contention. One or two additions and one or two deletions”. Rosen made those moves, Roger Craig brought renewed vigor and optimism, and we had a contender.

The last month of the season was exhausting. The players knew they weren’t going to overtake Houston, guys were going down due to injury and fatigue, and some of the call-ups and bench guys started to get more playing time. Chris Brown announced he was out for the year due to a mystery shoulder ailment. The Giants wanted to give Bob Brenly more at-bats, but they also needed to find out what they had in Bob Melvin. Brenly filled in for Brown at third base, and played some first base as well. on that fateful Sunday afternoon game Brenly started at third batting 6th in the lineup. It just so happened that the 49ers were playing the Rams that day, and the game was televised locally. Since the Giants were playing the Braves—and at that time every Braves game was televised on WTBS—we placed two TVs side-by-side in our living room and watched both games simultaneously.

This was indeed a very strange yet very memorable game.  Brenly initially played 3B when he signed out of Ohio University, but was soon moved behind the plate where he was a better fit. At this point in his career he could give the team 5-6 decent innings at third, but would usually be replaced for defense at the end of games.

The game progressed uneventfully until that fateful top of the fourth. The first batter Bob Horner hit a hard ground ball right at BB, and he booted it. Error #1. After a Ken Griffey Sr. single and a Rafael Ramirez sacrifice, Ozzie Virgil Jr was walked intentionally to load the bases. Glen Hubbard then hit a hard ground ball one step to Brenly’s left: he started to go for the DP, but dropped it. He picked it up, saw the runner heading for home, and threw the ball to the backstop. Two errors on one play, two runs score. The next batter was the pitcher Charlie Puleo, who hit a bullet right at Brenly’s head. He got the glove up, but it deflected into LF for an RBI single. Another hit and a productive out produced the fourth run of the inning—all unearned. Dale Murphy then hit another grounder right at Brenly, and of course he booted it, for his fourth error of the inning. Horner, batting for the second time in the inning, flied out to mercifully end the inning.

This was the end of a long, losing season for the Braves. They finished last in the NL West, a half-game behind the Dodgers (snicker). Their four-man radio-TV announcing team consisted of Skip Caray, Pete Van Wieren, John Sterling and Ernie Johnson Sr. Skip and Pete were away for the weekend doing college football games, so Eddie Matthews joined John and Ernie for the weekend. Ernie did the first half on TV while John did radio, then they switched after the top of the fifth. Matthews was a Hall of Fame player but had no broadcast experience. At one point during Brenly’s nightmare inning, Matthews said “I’m glad it’s him and not me”. Later in the game—after Brenly had been moved to catcher—Eddie said “hit it to Brenly at third, and you’ll reach”. That was TBS baseball in those days. Ernie Johnson was old-school big time. He truly felt sorry for Brenly, having taken his share of lumps while pitching in MLB from 1950-1959, all but one year for the Boston/Milwaukee Braves.

Brenly led off the bottom of the fifth with a solo HR, and John Sterling immediately gave him props for not letting the nightmare top of the fourth affect his hitting. Melvin followed with another homer to trim the lead to 4-2. The game progressed uneventfully to the top of the seventh. Murphy led off and hit a harmless pop-up behind second. Thompson called it, had it all the way, until the excitable Will Clark came running over, yelling “I got it” and cutting in front of Thompson to make the catch. Thompson said something to Will (like stay out of my way), and went back to his position. After Horner flied to left for the second out, Robby booted an easy grounder right at him. No doubt his concentration was affected by the Clark play. Instead of the third out, the Braves had a runner on first. Ramirez, the next hitter, homered for two unearned runs, and the inning ended with the Giants trailing 6-2.

Bottom of the seventh began with groundouts by Jose Uribe and pinch-hitter Mike Woodard. At this point in the game, the baseball spirits reared up to prove they do indeed exist. Clark hit a grounder right at Ramirez at SS…and he booted it. Thompson walked, Mike Aldrete singled, Candy Maldonado hit a two-run double, and Chili Davis walked to load the bases for Brenly, with the Giants down 6-4. Brenly hit a solid line drive over Ramirez’ head for a game-tying two-run single. Lancelotti batted for Melvin and struck out to end the inning, but we had a brand new ballgame.

As the eighth inning began, it was overtime at the Big A, Niners and Rams tied at 13. Rams were driving down the field, and Mike Lansford kicked a game-winning FG as the Braves batted in the top of the eighth. Now our total focus was on the Giants, because we did not want to suffer two losses in one afternoon.

Scott Garrelts came in and pitched two scoreless innings to take the Giants to the bottom of the ninth tied at 6-6. Maldonado grounded out and Chili flied out, bringing Brenly to the plate with two outs and Paul Assenmacher on the mound. A junkballer supreme, Assenmacher’s first three pitches were close but all out of the strike zone with Brenly taking them for a 3-0 count. He took the automatic strike one fastball, then watched a slow curve nip the inside corner for a called strike two. He fouled off two additional off-speed pitches, forcing Assenmacher to go to something faster in order to get the out. Brenly put a good swing on an inside fastball and knew immediately it was gone. The tape-measure shot landed approximately 20 rows up in the left-field bleachers behind that open area between the chain link fence and the left field seats. Brenly threw his left arm and bat in the air and danced around the bases as the entire Giants team came to home plate to greet him. John Sterling gave a great call, honoring Brenly for a game-winning HR and for hanging tough and persevering through his defensive struggles. I’ll never forget this game—it was truly one of the most memorable Giants games ever played at Candlestick Park.

Just two weeks later the Giants celebrated Fan Appreciation Day with a thrilling 16-inning come from behind win vs. the Dodgers. That was the game in which 52 players made an appearance, a game that ended with Maldonado at 3B, Youngblood at SS, Spilman at 2B and a pitcher rotating between LF and RF (depending on who was hitting). Greg Minton had had an absolutely awful year, the last of the four-year deal he signed after his peak season of 1982. The fans were all over him that year, but he pitched five strong innings that day, doubled with two outs in the 16th, and scored the winning run on a rocket single off the bat of…Bob Brenly. That game is #1 on my list of Giants/Dodgers classic games, it is top five on my all-time ‘Stick games, and was a fitting end to the home season.

The last game of the year was in Dodger Stadium, and as noted earlier Mike Krukow won his 20th game as Candy Maldonado hit a grand slam to seal the win. We were there to root on our boys and finish the year in style. Just another of many great memories from an outstanding 1986 season.

The Highlights and Lowlights