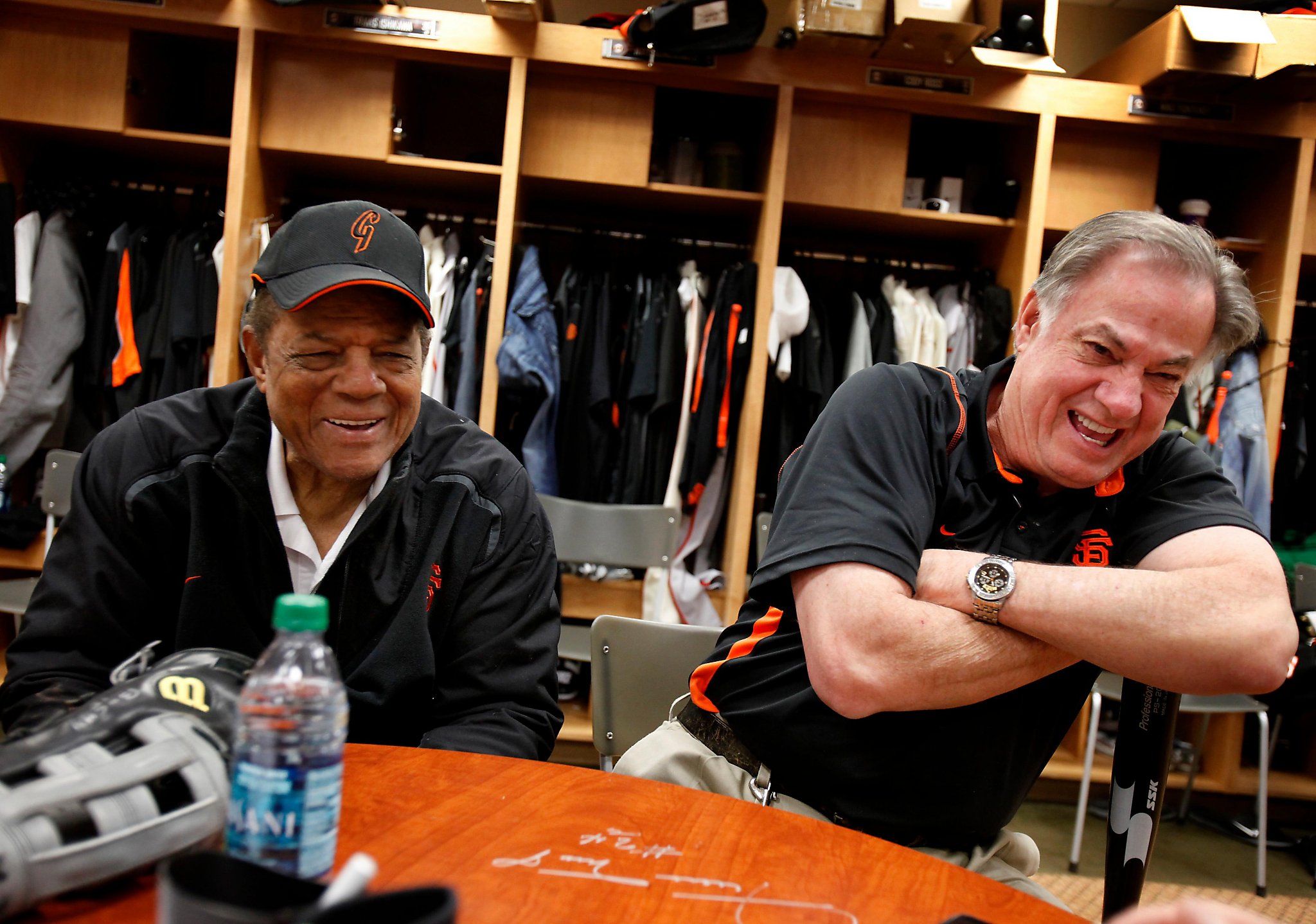 The term “living legend” comes to mind when thinking about former Giants clubhouse manager Mike Murphy. Murphy began his career in baseball as bat boy for the San Francisco Seals (AAA) from 1954 to 1957. In 1958 he was the first Giants batboy as the team arrived for its inaugural season in San Francisco and played their games at Seals Stadium. Murphy became visiting clubhouse attendant in 1960 when the Giants moved to Candlestick Park, a job he held until his promotion in 1980 as Clubhouse Manager.

Murphy cleaned the spikes of Willie Mays and would play pickup baseball games with the Say Hey kid after games. Murphy was in the clubhouse and in the dugout for every Giants home game since 1958. He was also the first person in the Giants clubhouse to get his hands on the Commissioner’s Trophy when Bill Neukom handed the prized possession to him on that magical night in Arlington when the Giants won the 2010 World Series.

Mike Murphy’s friendship with Willie Mays is featured in his new book, co-written with Chris Haft, “From the Stick to the Cove: My Six Decades with the San Francisco Giants.”  (Triumph Books). For more information or to order a copy, visit www.triumphbooks.com/fromthesticktothecove.

(Editor’s note: This interview was conducted over the phone,)

Together We’re Giants: Did you know that Bill Neukom was going to hand you the World Series Trophy that night after Game 5 in Arlington in the bowels of The Ballpark in 2010 after the Giants won their first World Series in San Francisco?

Mike Murphy: No. I did not know. He told me to take it to the boys and I gave it to Matt Cain and all the guys were screaming like crazy. I escaped the champagne showers and all that mess. I was in the safety zone. I was very happy for the boys. I was thrilled the way the World Series turned out after all the disappointments and being a runner up in 2002. To be honest, I did not know if we could beat the Rangers. They were a great team.

I was so proud for the boys and the Giants organization. I was especially happy for Buster Posey and Cody Ross, new guys to the organization who played so well. I was also very happy for Bochy.

TWG: What was it like to meet Willie Mays for the first time and later play pickup games with him and other clubhouse personnel?

MM: It was good. Amazing. Willie was great. We met when I was a young batboy and he came over to me one day when he first arrived in San Francisco to say “Hey There.” He was always friendly and a true gentleman, especially at the peak of his fame. One game, I think it was against the Pirates in the early 1960s, I had to be the batboy for both teams since the opponent’s batboy was sick. The rule was batboys had to wear the uniforms of their team so I had to change uniforms between every inning. After the game Willie came over to me to say “You had a hard day, I did too.” It turns out that day Orlando Cepeda was a bit gimpy and nursing some injuries to his legs so Willie told him to play on the line in right. Willie was going to take more plays in the outfield to rest Orlando so that day he did a lot of running in the outfield making many more plays than usual. He ran a lot that game and he was very tired when it was over.

TWG: How did Willie Mays react to the team moving to San Francisco from NY?

MM: In 1958 when Willie first came to San Francisco it was a strange thing for him. It was a very big deal because he had never been out west before. In those days traveling from New York to California was still a serious journey and a big cultural change. In 1958 when I was just starting out as a batboy for the Giants Willie came up to me to say “Hey.” He asked me how I was doing. He was very nice. I was thrilled to have this legend come up to me and be so nice to me. We have been close ever since. He has been like a dad to me for over 60 years.

TWG: In your you also talk about Willie Mays’s generosity helping clubhouse attendants financially, often without telling anyone. Can you tell us other little stories about Mays generosity and the generosity and kindness of other over the years?

He routinely bought us clothing like sweaters, shirts, and slacks. I remember him buying many articles of clothing from some of the great shops in the city. This is who he was. He was just a very generous guy and we all appreciated it.

TWG: What was the most difficult thing you had to witness on the field in all your years with the Giants. Any Specific heartaches or disappointments baseball wise?
MM: The hardest thing for me learning about Willie Mays being traded for Charlie Williams. It was terrible. I cried that day when Willie left. He was traded for Charlie Williams and $50,000. Giants owner Horace Stoneham traded Willie in 1972 because the team was losing a lot of money and needed an infusion of cash. I felt it was a terrible injustice, just wrong. I always felt Willie Mays should have played his entire career as a Giant.

TWG: Do you ever have a special feeling about a team going into the season?
MM: I did, in 2010. I knew that we had a special team. I knew we had a shot to win it all because we had a great ball club and tremendous pitching. That was one of my favorite seasons ever. There was just something special about those boys, as if they knew they could win the World Series. Lincecum and Cain were very special. You just don’t see pitching like that every year.

TWG: What was Barry Bonds like when he first arrived in the Giants clubhouse for opening day at Candlestick in 1993?
MM: Barry, I knew him since he was a kid. I used to take care of him and his brothers since they were little boys because Bobby Bonds and I were close. One day Barry screamed at me in the clubhouse over something unimportant.  I lectured him immediately, telling him I was taking care of him since he was a little kid. He never yelled at me again and he apologized.

When Bobby Bonds was sick in the hospital and did not have many days left he asked me to take care of his kids. He took my hand right there and ever since I kept promise to look out for Barry. Nowadays we are very close friends, Barry and I.

TWG: What is your favorite Bruce Bochy story?
MM: I used to call him bucket head because of the size of his head. I think he wore a size 8 1-4 cap. His head was huge. He would pretend to get annoyed and say he was not a bucket head. He was always good-natured with my ribbing, even when, before one game, I put a black bucket on his desk and said “This is your cap.” We laughed a lot. I love Bochy. He was very funny.

TWG: Should the NL adopt the DH
MM: No. Pitchers should hit. A pitcher should win his own game.

TWG: Did managers ever talk to you about the players and what was going on in the clubhouse or locker room to get an insight into the feel and psychology of their team?
MM: No, not really, Managers walk through the clubhouse and know the guys. They never put me in that awkward position of having to reveal anything. A manager’s job is to know his players and his team. All the Giants managers I worked with understood this.

TWG: Who was the funniest Giants player?
MM: It’s a tie between Mike Krukow and Duane Kuiper. Those guys were always a lot of fun. When Will Clark first join the team he was a cocky little kid and a rah-rah type of guy. Krukow would tell him to tone down the rah rah stuff by saying “What are you in college now?”

They felt they had to teach him a bit about being a Major Leaguer. One day they decided to nail down his cowboy boots in his locker. They were always pulling pranks. Krukow and Kuiper were the only two guys who could get away with it.

TWG: Tell us about the process of writing your book? Did you have a hard time choosing anecdotes and moments to describe? What was left out of the book that you wish could have been included?
MM: In my work I got to learn about many personal things that happen in a player’s life. The personal lives of ballplayers are as unique as yours or mine and they go through all the ups and downs we go through. I did not want to put any of that in the book. It was my goal to keep the book enjoyable and avoid controversy. I think Chris Haft and I agreed to keep the book happy and pleasant. We did not want to make anyone feel uncomfortable. Many guys who I got to know over the years are still in baseball as executives and managers or coaches. I felt it was important to respect their confidence and the privacy of the clubhouse.

TWG: If there is one message you would like to convey to Giants rookies breaking through the ranks of baseball today what would it be?
MM: I would tell them welcome to the Giants and have a good time. I would tell them to work hard and be proud of your work. Be proud of the city and being a San Francisco Giant. That’s what I would tell rookies.