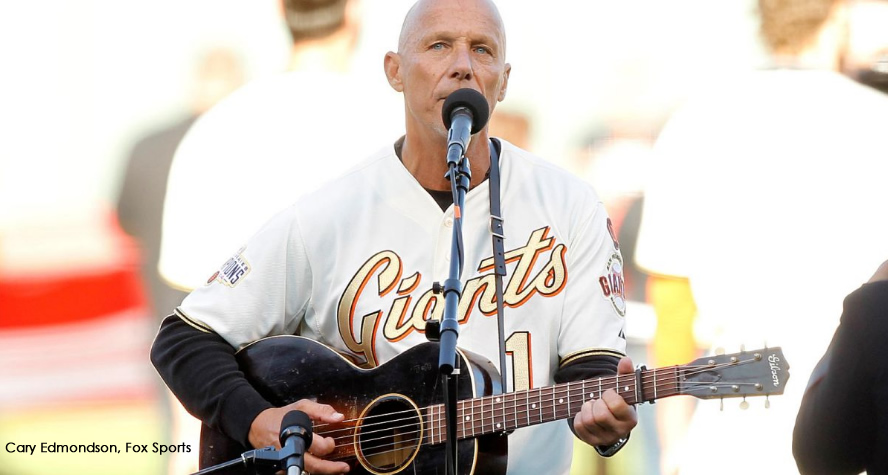 Tim Flannery is a legend among Giants coaches. His eight year run as the Giants third base coach and Bruce Bochy’s right-hand man, beginning in 2008 and concluding after the 2014 season, was a runaway success. Flannery is that rare phenomenon in the world, a person who excelled as a player and coach, and who is now excelling as a singer and songwriter with his band Tim Flannery and the Lunatic Fringe. His tours are huge successes and 100% of the proceeds earned from his musical career goes towards charitable causes.

He is also founder of the Love Harder Project, a non-profit dedicated to assisting victims of violence. Through the Love Harder Project and with the aid of former players and coaches including Jeremy Affeldt and Will Clark, Tim Flannery raised nearly $100,000 for Bryan Stow, the Giants fan who was assaulted on opening day in 2011 in the Dodger Stadium parking lot.

Flannery is also a part time commentator on the MLB Network and has retained a strong following among Giants fans, even after his retirement from baseball.

Throughout his career, in and out of baseball, Flannery has developed a reputation as a hard-working and yet easy-going professional with a unique dedication to his crafts. He is beloved by former players and coaches alike.

This interview was conducted over email and has been modified to fit your screen. It is rated “TF” for mature Giants fans only.

Together We’re Giants: How are you handling life after baseball? Do you miss it? Are you enjoying your free time away from the rigors of the game? Do you prefer being a musician to a baseball coach?

Tim Flannery: I don’t miss the whole enchilada, bits and pieces, but the game doesn’t allow that, I’ve been a musician my whole life, the great thing about life is you can be and become anything you are. You don’t have to be held back because of any thought process.  One thing for certain, I promise you will see, it’s never too late to be the person you were meant to be. I’m proud of being a Three-time World Champion with 15 records out. I’m proud of the non-profit Love Harder Project I created to help others… I’m still growing and evolving, living… I love it.. I’m so blessed…

TWG: Your band, Tim Flannery and the Lunatic Fringe, have toured with many dates sold out. How has the experience been for you? Do you find a similar camaraderie among your bandmates that you shared with teammates and ballplayers during your days as a player and coach with the Padres and Giants?

TF: I love my band there are some similarities, but I have artists in my band, women, crazies..” The lunatic fringe” is it.. I’m the only normal one, think about that? It’s somewhat different.. unless you’re a left-handed pitcher. I have always kept them separated so baseball wouldn’t hold back the music, and the music couldn’t be an excuse to fire me with the shallow thought that you have to follow one or another. I want everyone here and now to make a choice: “You want water, or air?” I need them both!

TWG: You’ve been called a “two sport star for your music and baseball careers” by Garth Brooks. Can you share with us the demands of both pursuits? How are they similar as challenges and how do they diverge?

TF: It’s preparation, feel, controlling adrenalin, breath, but both only come with reps…good old hard elbow grease …as a coach you spend lots of time hoping, prepare the player then hope. In music if you suck , it’s your own fault… I like that.

TWG: You have also found a niche as a guest commentator on the MLB network during the baseball season. Your work has been highly praised by players and coaches alike. What do you enjoy most about this newfound career?

TF: I’m under contract to do 40 appearances the next two years with MLB, and 70 with Comcast Sports Net for Giants games..I love it.. from a safe distance.

TWG: What are your thoughts about the Giants 2014 postseason?

TF: That was a great year, amazing.. but personally the hardest year of my life… It’s not as easy as it looks out there on that schedule, in that life.. The key is when knowing to tap out, after 35 years I made it out alive… so to speak.

TWG: Has it been difficult for you to walk away from your career as Giants third base coach? What do you miss most from it? What don’t you miss?

TF: I miss 4 o’clock with the pitchers and bunters before the ballpark is open…special time, I’m like their dad. They could tell me everything. They were the age of my son but with 100 million dollars… Better find a way to get through to them, or they will get another coach.. But it was not difficult leaving… I have many facets to my life.

TWG: Does Bruce Bochy ring you up often to discuss strategy and get your opinion on things? Did he contact you and recruit you as his therapist during the Giants second half struggles in 2016?

TF: I run and hide…. I didn’t retire from the pain, to keep feeling the pain, and not get paid….I have been to 5 World Series 4 all star games with Boch … We had a hell of a run!

TWG: During your years with the Giants what are some of your favorite experiences and memories?

TF: The fans, friends, history we created in San Francisco…greatest 8 years of my life. In history books forever …thank you people, you loved me..I’m honored to have found a home.

TWG: Would you say that decisions on whether or not to send runners in close plays is about the situation (score, the runner, the opposing defense, location of the hit ball) or instinct and judgement (location of the baserunner, etc) Or both?

TF: We don’t have time to give you a one sentence answer on the toughest job there could be. I did it 20 years, come out early we can walk up and down the line, talk positions, reasons, odds, you’d be drinking ten minutes into it… Ha!

TWG: Should the Royals third base coach have sent Alex Gordon?

TF: No, the runner didn’t run out of the box, but no one except us 3rd base coaches watch the runners and the ball..

TWG: What was going on in your mind when you learned of the Giants parting ways with Roberto Kelly and Billy Hayes?

TF: I’ve been fired, I’ve won 3 World Championships. It’s a motherfucker…the magnitude has killed people, I’ve buried best friends, watch lives get destroyed. It’s a charmed life, a blessed life, but getting fired, well most in the game have been fired. I’ve changed fiddlers before. Didn’t do it because the fiddler ain’t great, I did it to change the sound of what I needed….metaphor for you folks…

TWG: Your Love Harder Project has raised over $100,000 for Bryan Stow and advocates against violence in general. Can you tell us a bit about the creation of this worthy endeavor and the response from friends and the public?

TF: We need support, I put every cent in it from music, shows, donations, my donations, and have given it to domestic violence refugees, anti-bullying projects, and the Bryan Stow foundation. We fund homeless children’s Summer camps. We are in need of support. Check out Loveharderproject.org.

TWG: What do you have lined up for the next few years?

TF: To live tomorrow the best I can…

TWG: Thank You and good luck with your future endeavors!