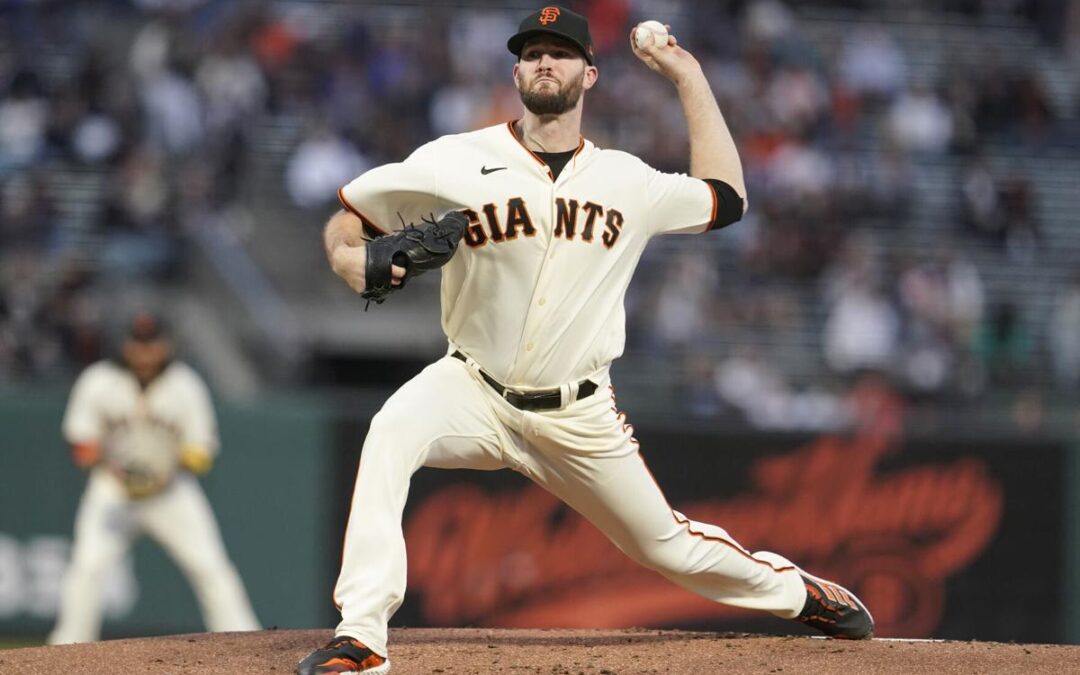 “Our players can and should be proud. It’s a huge accomplishment. This team has done so many good things. To say that this club has won more games than any other San Francisco Giants team is quite fulfilling.”

“They did it with Little Ball!”
-Mike Krukow

The Return of Alex Wood

Last night the Giants eeked out a gutsy 1-0 win behind six sterling innings of pitching by Alex Wood and a clutch sacrifice fly by Kris Bryant in the bottom of the seventh inning to score Steven Duggar on a fairly close play at the plate (I will get to that in a minute). Our loyal TWG readers will recall that I predicted Wood’s return would be a big difference-maker down the stretch during his bout with Covid….

In his final regular season start the tall lefty had shutdown slider that bit hard down and in on right-handed batters and that had a wing span unlike most of those thrown by other left-handers. Wood’s sliders covers a lot of ground and may look like a curve to a batter but its speed and its downward bite make it a very difficult pitch to hit. On this night it was ON and Wood would allow only three hits in dominant effort over six innings while recording six strikeouts and not allowing any walks. The outing also gave the bullpen an inning or two of rest and allowed Gabe Kapler to play matchup at the end of the game.

The game was a classic pitcher’s duel with Merrill Kelly of the DBacks very impressive as well. The Giants totaled only seven hits on the night with Buster getting two of them to raise his batting average to .305.

There were two errors by the San Franciscans last night, one by Longo and one by Wilmer Flores who was playing first base in BB9’s absence.

The winning and only run scored after Tommy LaStella singled to lead off the seventh and Duggar was inserted as a pinch-runner. He stole second and was sacrificed to third to set up the heroics by Kris Bryant. As I mentioned earlier Steven Duggar raced from third to score the only run of the game on a fairly shallow fly to right off the bat of Kris Bryant. On Sunday I busted Steven Duggar’s balls over his glance at the play in right while rounding third to score from second in the top of the ninth inning. I criticized the outfielder for looking at the play and becoming a spectator at a crucial moment and risk slowing down in the process. Well, I am happy to report last night Duggar made a beeline to the plate and executed a perfect head first slide to score while focusing on his destination. Bravo.

By the way, later in the game, Steven Duggar hit a three-run home run to left to give the Giants breathing room and continue his fantastic season. Unfortunately, one Daulton Varsho lept high above the wall and at the very last second snagged the hit and ended the inning and basically made one of the best catches of this 2021 season. It was sensational.

Dominic Leone pitched the seventh allowing one hit and Jaslin Garcia and Camilo Doval 8th and 9th) finished up. It was Doval’s second career save and it came on the night after his first.

The win keeps the Giant lead atop the National League West at two games over the Bums in the Southland. With four games left in the season the Giant magic number is three.

This is a great post-game interview with Buster:

“To be a part of the team that has won the most games is really special.” It will be Madison Bumgarner against Scott Kazmir in the final game of the series. Bumgarner in a foreign uniform is bad enough. Bumgarner facing the Giants in San Francisco with fans in the stands for the first time in the heat of a pennant race… well, that is baseball theater you do not want to miss. First pitch is at 6:45 PM, Willie Mays Field time.