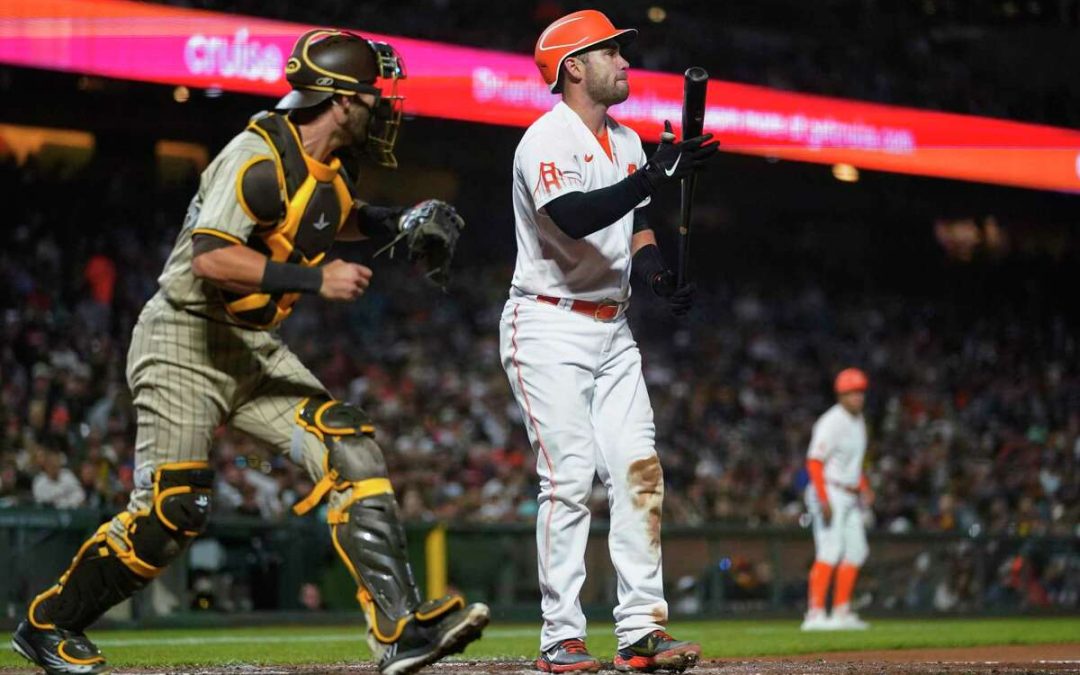 Those are the chances the Giants have of reaching the playoffs after last night’s 4-3 loss to the Padres. Yes, it literally is .3% according to Statcast and Major League Baseball.

The Giants have lost ten of their last twelve games and are 9.5 games behind the final Wild Card Spot. Sayonora Joctober. This will be the first time in Joc Pederson’s career that he will not appear in a postseason series. That’s pretty amazing and it did not have to be this way, as Andrew Baggarly explains in The Athletic.

“It’s not great. It’s not great,” Pederson said. “I’ve been fortunate to win a division every year I’ve played in the big leagues. So … yeah.”

So here’s a question: Why is Pederson still here, exactly?”

My sentiments exactly. Why on Earth did Farhan Zaidi not deal his assets when he could earlier in the summer?

Baggarly goes on to explain that the Giants could put Pederson on outright waivers as a gesture of good faith toward their player:

“It’s not something that teams do entirely out of the goodness of their hearts, either. It’s good business to be known as an organization that will seek to put players in favorable situations. It enhances a club’s reputation when it tries to attract the next free agent on a one-year contract. You’re telling the player that if it doesn’t work out, you’ll find him a soft landing spot somewhere else. Transactions might be more clear-eyed and cold-blooded than ever, but there’s still a shred of emotional appeal involved when you’re courting a free agent. Teams will mine every advantage to win a ballgame. Why not mine every advantage when you’re competing for free agents?”

Man the lifeboats. This ship is sinking fast.

But yeah, let’s platoon away and play Mercedes at first base. Is it Logan Webb’s fault Austin Wynns is about to set a Major League Record for catcher’s interference calls by a catcher named “Wynns”? Bcraw’s throwing errors maybe don’t happen with Belt at first but the captain’s got a gimpy knee. He is likely done for the year.

Yes, ok, it was a classic pitcher’s duel through five innings with Logan Webb and Blake Snell (the most confounding pitcher in the Bigs) going zero for zero and looking excellent. Then in the top of the sixth inning with two outs Machado hits an infield single that Crawford tries to make a play on and does not succeed because his throw is wild. Machado goes to second, Bell drives him in in the next at bat. 1-zip Padres.

There more Giant errors and two homers by the Padres to cash in unearned runs. The Giants pitching staff allowed one earned run in the game that saw the Giants make four errors.

But Yeah, Platoon we must!

Mercedes at first? Umm not a good idea says me and you but the analytics masters say it doesn’t matter because he has a good spin rate at the plate. SEEEE what I mean?

It is now obvious the Giants will not recover from this disaster to save their season. We are officially off the rails and approaching rock bottom… Insert cliche here….

At least Joc Pederson hit a two-run homer to make it a game. It was his 20th of the season.

“We haven’t played good baseball for quite a bit now. We have to play better. I haven’t had a chance to look at the standings. It’s not something that’s front of mind right now, and mostly because it just really doesn’t matter. We just have to play better baseball.”

The Trade Deadline Moves Not Made Will Haunt the Giants

Farhan Zaidi’s decision to do nothing at the trade deadline, except for one or two minor deals, means the Giants will end the season out of the playoffs, likely under .500 and with Joc Pederson and Carlos Rodon both in limbo. If Pederson walks from the Giants, the most likely scenario, the team will get nothing in return and lose the opportunity they had to leverage the October star for other players. The same goes for Rodon. It is hard to fathom that Rodon could just opt out of the final year of his contract when the Giants could have dealt him in July. There is no sense in going into all of this again and critiquing Farhan Zaidi’s risk-averse approach to trades and free agent signings. We have seen it in full effect and the question is: Do the Giants and their fans feel this team is being built with a foundation for the future after four years of the Zaidi reign?