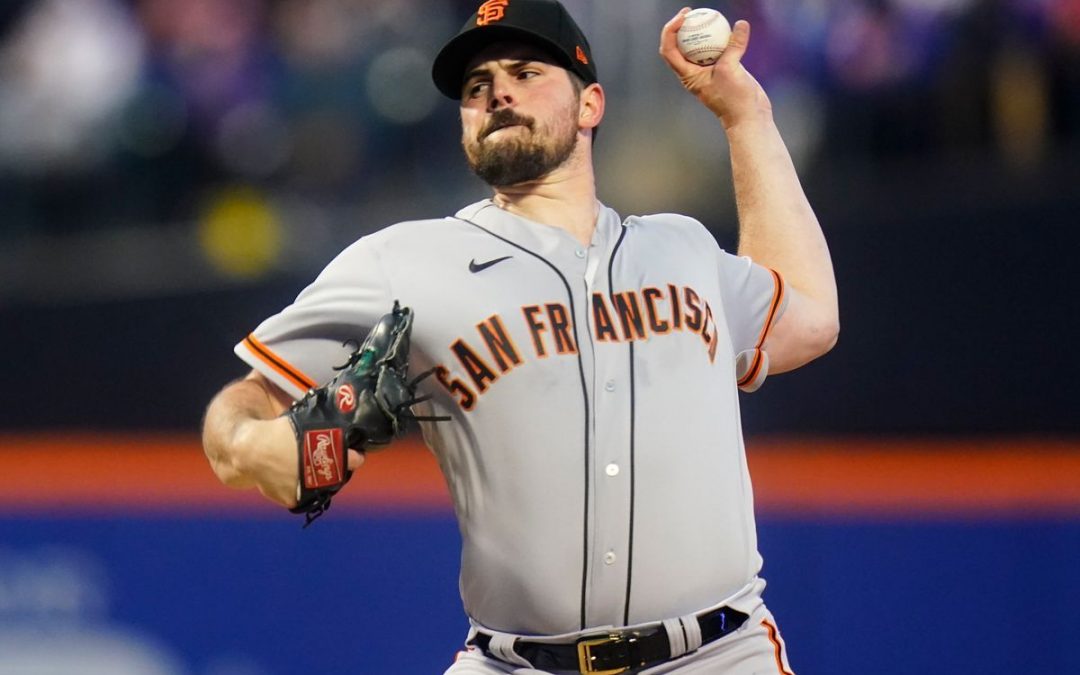 No, that headline is not an allusion to Global Warming, more like Carlos Rodon Heat. It was a fastball at 97 on the inside corner to a right-handed Met that struck him out and put an exclamation point on another dominant performance by the new Giant.

Evidently he did not even have his best stuff on the night when he shut down the Mets and led the Giants to a much-needed 5-2 victory after an inconvenient double-header sweep on Tuesday.

What has impressed me most about Rodon is his demeanor, some combination of an enraged, very mean mighty linebacker deciding to try baseball out for fun and blowing away opposing hitters like they were itsy bitsy tailbacks. His lethal stuff is a thing to watch, in particular his cold-blooded use of the fastball up in the zone, particularly in counts when it is not expected. Rodon mixes his offspeed pitches well and throws them for strikes, step two in a successful pitcher’s road to a win. But step one has always been and will always be the ability to command the fastball. When you have an easy 97 like Carlos and you can locate it up and down, in and out, well sir… that’s all she wrote for the opposition.

Right now Rodon is pitching like a meaner beefier version of Madison Bumgarner with a bigger fastball. Imagine that!

“The quality of that fastball is exactly what we should be talking about. These are really good hitters who are set up to handle that style of pitching and still are swinging and missing at balls in the zone, and sometimes in the middle of the plate. It’s a unique fastball. We haven’t seen many like it in the last couple years.”

The story of this win was not only about Rodon however. The Giants sliced and diced their way to three runs thanks to singles and doubles, RBI hits from BCraw, Wilmer Flores and Joc Pederson. Then came a mammoth, upper-deck solo home run from Brandon Belt that kept the Giants on the initiative.  It was a thing of beauty and the captain knew it right away as you can see from his patented BB9 Bat Drop, the same one he invented in Game 2 of the 2014 NLDS when he homered to give the Giants that magical 18-inning win.

Belt’s Bazooka came on his 34th birthday no less:

Joey Bart threw out a runner trying to steal second base in the bottom of the seventh inning with runners on the corners and two outs. The play ended a potential rally and helped preserve the lead for the San Franciscans. Why do I mention this? Well, in a game when a catcher goes 0-4 with three k’s that throw out of a runner can be as big as a homer. Bart’s bat may have cooled on this day but his handling of the pitching staff and his much-improved defense overall have been a big difference-maker for his place on the Giants team and for the Giants overall.

McGee pitched the ninth for a shutout inning and his second save of the season. The fastball velocity of the big lefty is not what it should be (around 94-95 MPH) but his command was enough for the win. The Giants say the velocity drop is a mechanical issue that they are working on and not an issue with the pitcher’s arm or health.

The Giants will have a chance to even the series tonight for their final game in New York at 1:10 PM, local time. It will be Anthony Desclafani facing Carlos Carrasco.