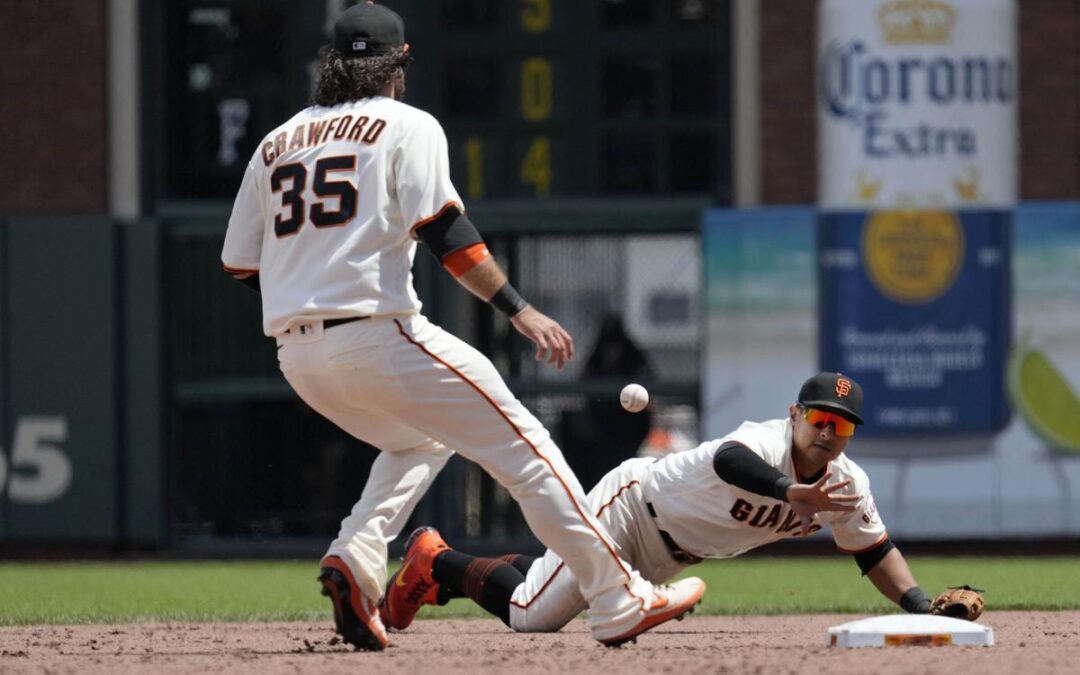 Some wins mean more than others. Yesterday’s 5-0 victory over the Bums sealed a series win at home and gave the Giants a three-game lead in the National League West. I rate this victory an 8 on a scale of 1-10 in terms of importance. If the Dodgers win they go home only one game back and with the new additions of Max Scherzer and Trea Turner. Now, the Giants have a bit of breathing room and simply need to take care of business at home this weekend against the Astros to stay in first as the reinforcements in the form of Evan Longoria and Brandon Belt are about to appear.

The win was especially rewarding in its form. Johnny Cueto was superb in his 5 2/3 inning outing in which he did not allow a run and basically blew the Dodger hitters away with a superb fastball that hit 95 and 96 on the black routinely when he was not throwing a variety of swervers, dips, shimmies and change-ups in the process. In one pitch against Cody Bellinger the dread-locked dandy shimmied twice, paused then blew a 96 mph fastball by the Dodger center fielder to end an inning. It was a thing of beauty.

Yesterday was opposite day for the Giant attack. four of the five runs scored via hits to the opposite field, beginning with Brandon Crawford’s double to left in the bottom of the first. Welcome back BCraw. Wilmer Flores hit a two-out double to right center to drive in a run as well. His hit came on an 0-2 count and was an exercise in hitting discipline. Austin Slater had a key RBI knock to center, also with two outs. Slater in fact had a great day at the plate hitting the ball hard, I mean really really hard the first four times up. He would end up with two hits in five trips on this day.

LaMonte Wade Jr. finally has a batting average against left-handed pitching, getting an RBI double to left-center in the bottom of the seventh inning to add a very important insurance run. Four of the first five runs the Giants scored came with two outs. That’s some clutch hitting folks and it looked like the scouting report on this day for the hitters was to go the other way on hard stuff. David Price was not terrible. He was the victim of some terrific hitting and the superior pitching by Johnny Beisbol.

The key at bat of the game took place in the top of the sixth with two outs when the Dodgers loaded the bases and Manager Gabe Kapler decided to take Cueto out of the game in favor of Jaslin Garcia. Garcia would then blow away Cody Bellinger on three pitches to end the threat and send the big hometown crowd (in which there could be seen more than a few Dodger blue shirts) into delirium.

Just before that at bat Johnny Cueto and Justin Turner had an epic battle that resulted in a walk. It was an 11-pitch Homeric struggle that saw Turner foul off numerous close pitches. Cueto was throwing everything he had into the effort to retire the Dodger third baseman who refused to die and who refused to chase two very good sliders/change ups on the outside corner. In the end, after ball four it was very interesting to see Turner look at Cueto and nod in a gesture of sportsmanship that said “Great effort, you threw some nasty pitches.”

One interesting tidbit of the series is that the Giants won two of three without going deep in any game. That bodes well for October…

During the at bat the Giants broadcast crew was discussing how certain players like Turner elevate their game during the rivalry. I would say the same is true of Cueto on this day.

Dominic Leone, Tyler Rogers and Jake McGee each looked very strong in the 7th, 8th, and 9th innings respectively. It was a fabulous day at the ballpark all around.

By the way the Dodgers committed another error that lead to a run while the Giants played mostly great defense. The San Franciscans now lead the National League in Fielding percentage while the Bums are 13th. Interesting…

Here is the double by Wilmer Flowers:

A powerful RBI double from Flo

Speaking of Clutch, our very own Clutch Up was recently in a very serious auto accident. We wish him a speedy recovery and send him our prayers. We miss him.

The surging Astros come to town for three beginning tonight at 6:45 PM, Willie Mays Field time. It will be Framber Valdez of the Astros against Kevin Gausman, who is looking for his first win since July 11.