All Star Break Wrap: The Giants Are Sitting Pretty 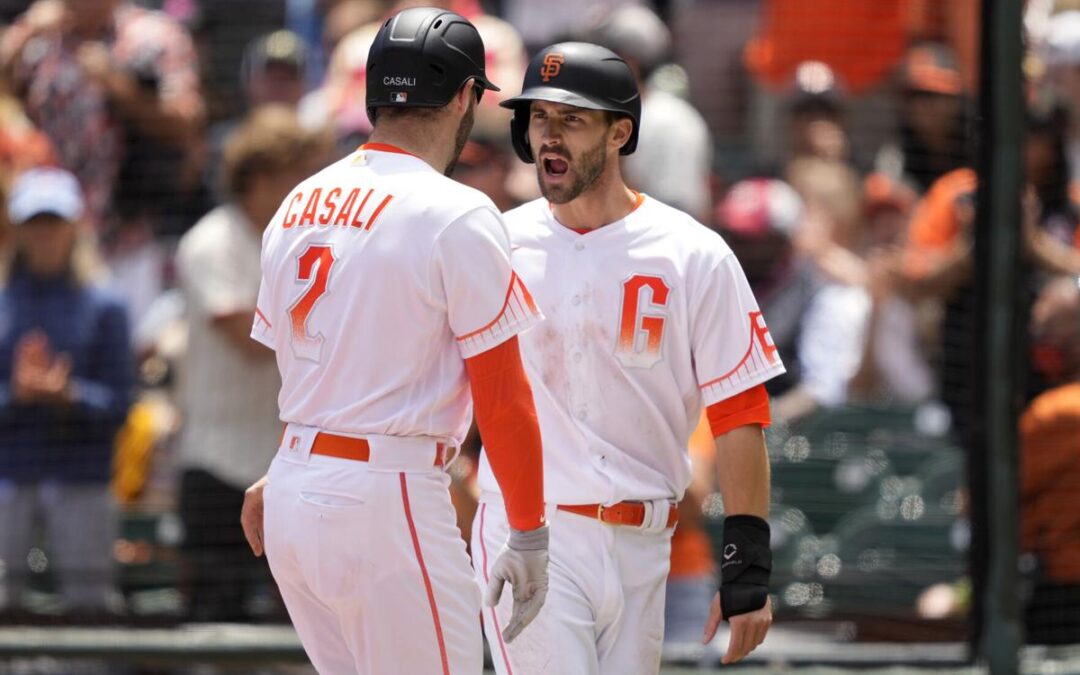 After their three-game sweep of the suddenly lifeless Washington Nationals, The Giants solidified their lead in the National League West Standings to two games after coming perilously close ( 1-2 game) to losing the top perch earlier in the week. The sweep means the Giants go 4-2 on their six game home stand after losing two of three to the St. Louis Cardinals. The sweep means the Giants enter the All Star Break with the best record in baseball at 57-32 and a superb record at home with a 30-13 mark, also the best in MLB.

Raise your hand if you saw this coming in April!

In yesterday’s game Kevin Gausman won his ninth decision of the year against three losses. He pitched six innings allowing one run on three hits. He also recorded nine strikeouts. His splitter looked pretty good. His heater was hot. His ERA is now a beautiful 1.73. The big blow in the game came off the bat of Curt Casali, who suddenly appears like the second coming of Buster Posey now that Posey is on the IL with a bad thumb. That hit was a three-run jack in the bottom of the second that more or less settled the game. The homer run came off a sliderish pitch on the outside corner and then traveled deep to straightaway center. it was a very impressive piece of hitting.

Dr. Lefty wrote her typical fabulous post on the Giants at the All Star Break. The piece covers many interesting issues including the All Star Game appearances for Crawford and other Giants, the Rule 4 Draft, the futures game and much more. It is a an article everyone should read. It is worth printing and pasting on your refrigerator door.

The Giants Number 1 Pick is Will Bednar of Mississippi State

With the 14th pick in the @MLBDraft, the #SFGiants have selected RHP @bednar_will out of @HailStateBB. pic.twitter.com/h6lN23l1OK

The pick is not a surprise as Mr. Bednar’s stock has risen considerably since his dominant performance in the College World Series this past Spring. The big righty has above average stuff including a fastball in the 91-94 range that has topped out at 97 and a superb slider. Many experts are surprised he lasted as long in the first round (number 14). Most reports I have read so far praise the pick and project Bednar as a solid number 2-type starter in the Matt Cain mold. If that comes to fruition then the Giants hit the jackpot with this pick.

Bednar was the key piece in the Bulldogs upset of Vanderbilt to win the aforementioned CWS. That championship blood is but one major part of the decision to make him a Giant. Kudos to Mr. Zaidi and others on this one.

Here is a cool piece by Melissa Lockard of The Athletic on the pick. (cue the whining about the link being behind a paywall…)

The Giants at the Trade Deadline

I do not see the Giants trading away any young pieces on the farm to get better in 2021 at the trade deadline. Consider the amazing achievement of our team so far. With key injuries to BB9, Buster, Logan Webb, Evan Longoria, Yaz and others our boys of summer have not only persevered, they have kept the lead in the NL West in a division with arguably the two best rosters in MLB in the Padres and Bums. If you are Farhan Zaidi you play the second half with house money and take your chances on a flier by trading maybe a guy like Alex Dickerson or Mike Tauchman and a throw in A ball prospect for bullpen or starting pitching help. That is all.

The Mid-Summer classic will not be played in Atlanta this year as was originally scheduled since MLB decided it did not want to be associated with a state government hell-bent on denying people the right to vote. Let us not forget this and applaud Major League Baseball for doing the right thing and taking a principled stand on a hugely important issue.

Since the game will be in Denver expect an interesting home run derby. Go National League!