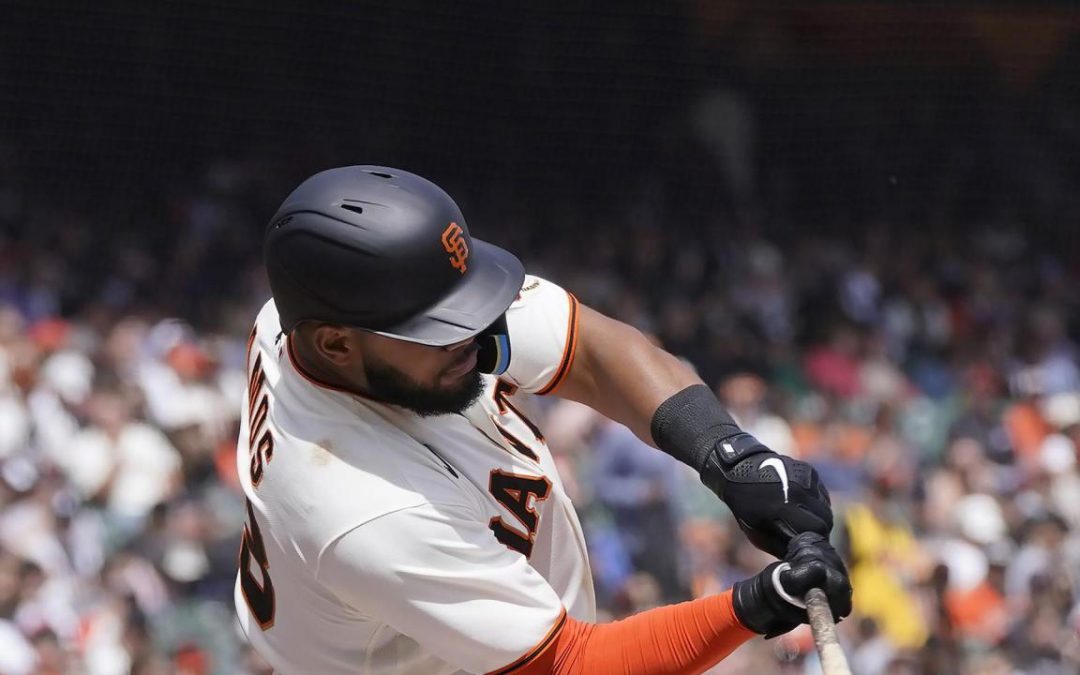 Heliot Ramos made his Major League debut with two hits and a run scored as the Giants beat the Miami Marlins 3-2 in a tense, dramatic game that capped a tense and dramatic series that felt like it was played in September instead of April.

Kris Bryant? Who needs him. Nick Castellanos? No Thanks. We go Heliot. It appears Farhan Zaidi may have had this planned all along: Ramos has a decent Spring, gets sent to Sacramento to play in a few games so he is not cold on the Giants bench for the opening two games against righties, gets called up for Sunday’s game and… But no, not really. The true story is that John Brebbia had to go on the bereavement list and the Giants wanted Ramos to fill that spot with a lefty…Ok, so much for the. master plan but you never know how long this will last:

Kapler shares the reasoning behind Ramos' promotion to the big leagues pic.twitter.com/yuhJLmiZYA

“Best moment of my life, It was great. After I got the first hit I was more relaxed and it was pretty good, honestly. I’ve been waiting for this moment so I just went out there and played and do what I do.”

Perhaps most impressive was Ramos’s poise. He did not look overwhelmed or too impressed with the moment. It was fabulous and bodes well for the Giants outfield. I hope he will given starts against righties to prove he can be an everyday player.

Interestingly, Ramos played in left field as Mauricio Dubon got the nod in center. He also drove in a run with a double and scored the winning run in the bottom of the third inning after an error by Marlins starting pitcher Trevor Rogers.

The play of the game may have been Darrin Ruf’s spectacular unassisted double play in the top of the eighth inning after the Marlins got the lead off man on to start a potential rally. Ruf speared smash to his left, dove to tag the Marlin before he could reach the bag and that was it.

This was the first error-free game for our boys after two very shaky defensive efforts on Friday and Saturday. I was about ready to write a treatise on the limits of versatility when guys like Wilmer Flores and others continue to look over-matched on the field but I’ll save that one for a column after a loss.

With the win the Giants begin the season 2-1 and on a very positive note. Now, about Anthony Desclafani…oooooh boy… It was not his day. That the Giants won this game after an outing with a line of 3.2 8 2 2 1 5 0. Desclafani allowed nine base runners in less than four innings but stellar work from the law firm of Garcia, Littel, Rogers and Leone saved the day for the Giants. Jarlin Garcia’s two clean innings of work restored order on the mound and set the tone for the game.

With Heliot Ramos and Joey Bart both making their debuts with wins on the opening weekend the Giants the Giants may be entering a new era with the blossoming of draft picks to propel them into new heights in October. If both players continue to a productive season the sky’s the limit for the Giants and all those complaints about Zaidi not signing a big bat from the right side will be yet another example of why Farhan is running the show and we are not.

The Giants host the Padres in the first night game of the season. It will be Nick Martinez against Alex Wood with the first pitch scheduled for 6:45 PM, Willie Mays Field time.