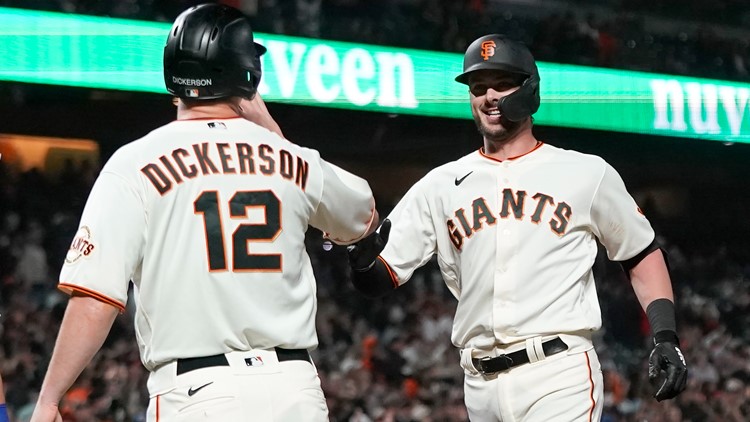 On this night BBB stands for Belt, Bryant and Brandon. They and the Giants took care of business against a free-falling Mets team dealing with injuries and various other misfortunes on a night the Giants had a clear advantage in the starting pitching matchup and in rest. The Mets arrived in their hotel rooms around 4:45 AM the previous morning…

Once again the Giants scored first in a ballgame and once again they prevailed. This time it was against the Metropolitans of New York in a fascinating back and forth contest at Willie Mays Field. Kris Bryant went deep twice, the second coming one pitch after Brandon Belt hit a pinch hit home run that looks to be arriving in Jupiter’s orbit about now. Darrin Ruf had an RBI single to get the scoring started and Brandon Crawford went 4-4 with a run batted in to raise his batting average to .304 and his MVP hopes to more and more probable. Wilmer Flower Power Flores had two hits and a run driven in against his former team in a game that saw the Giants chase Met starter Rich Hill with two outs in the top of the fourth. Mr. Hill has not yet won a game with the New Yorkers. Remember when Rich Hill would tie the Giants up in knots and send them packing to losses on a regular basis when he was a Los Angelino? This win feels pretty good.

Kevin Gausman went five innings to win his career high 12th game. His was kind of an up and down outing with smooth sailing in the first through fourth innings before the Mets plated three runs in a fifth that was best described as shaky for the big righty. Despite those three runs Manager Gabe Kapler praised Gausman by saying he had a bit more life on his fastball and slider than in previous outings. The five and done outing is becoming a pattern and a problem for Giant starters this month. One wonders if the question is fatigue or opponent batters getting better reads the second and third times through the orders. It is an issue and it is taxing the Giants bullpen. On this night the Giants needed six pitchers (Gausman, Jackson, Alvarez, Watson, Rogers, and McGee to win a nine-inning game. This is simply not sustainable.

The story of the night however has to be Kris Bryant. The new Giant is fitting into the team nicely and hit his second and third bombs since becoming a San Franciscan. His first homer went to dead center and just sailed a foot over the wall. It gave the Giants a 4-2 lead they would not relinquish. It came off Miguel Castro who threw a cement-mixer sliderverveslerve that had hit me written all over it down the middle of the plate and about knee-high. Bryant’s second homer also came on a breaking pitch. Mr. Bryant appears to be the type of cripple hitter lurking in the shadows waiting for off-speed stuff.

It is interesting to note that the old configurations of our ball-yard would not have allowed the Giant third baseman to touch ’em all. That hit would have been a double. In my wholly unscientific calculations, the Giants have benefited much more than their opposition from the shorter fence in center.

Belt & Bryant Back to Back

Back 2 Back
Belt 2 Bryant pic.twitter.com/UMuuR0yAxR 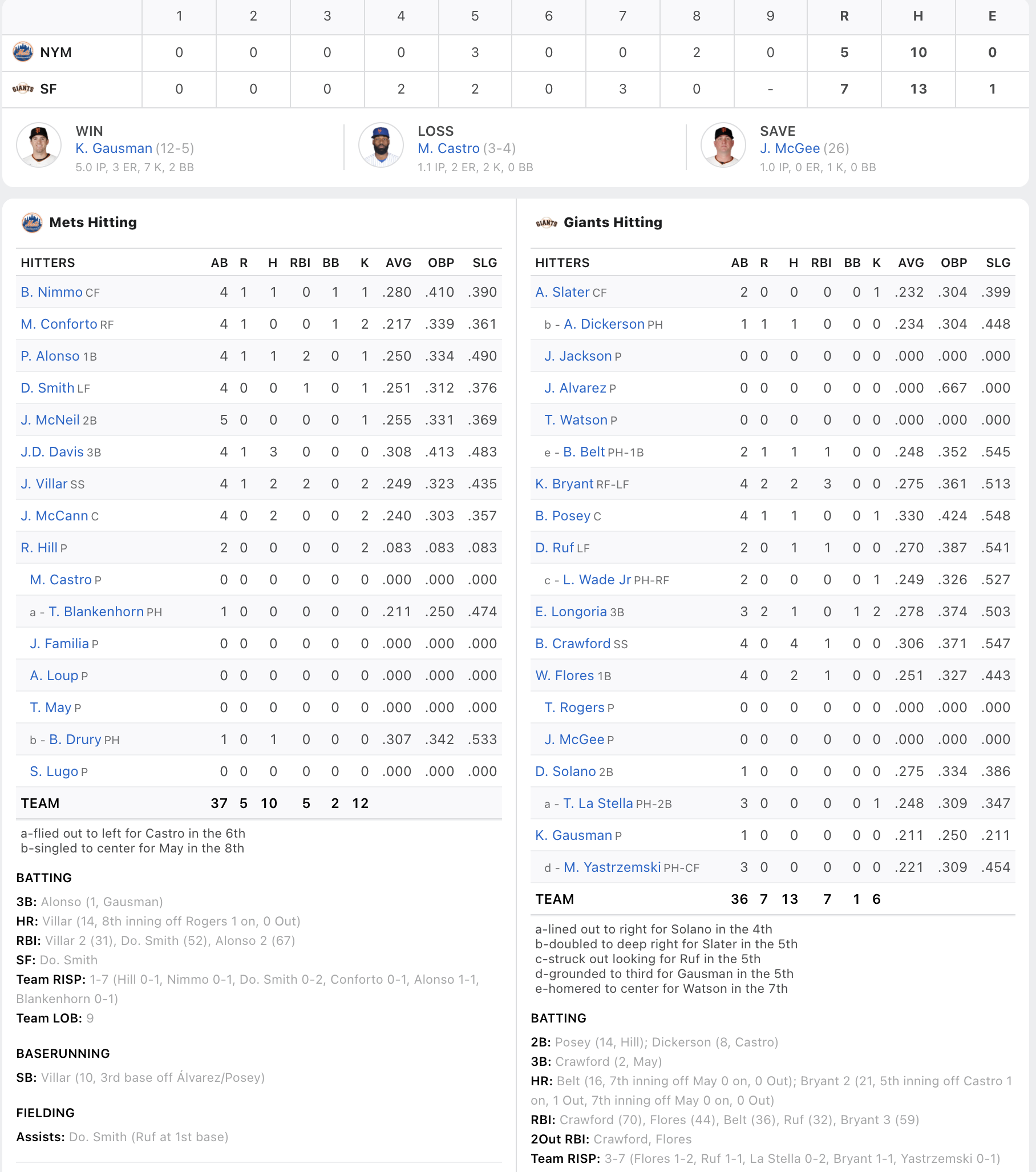 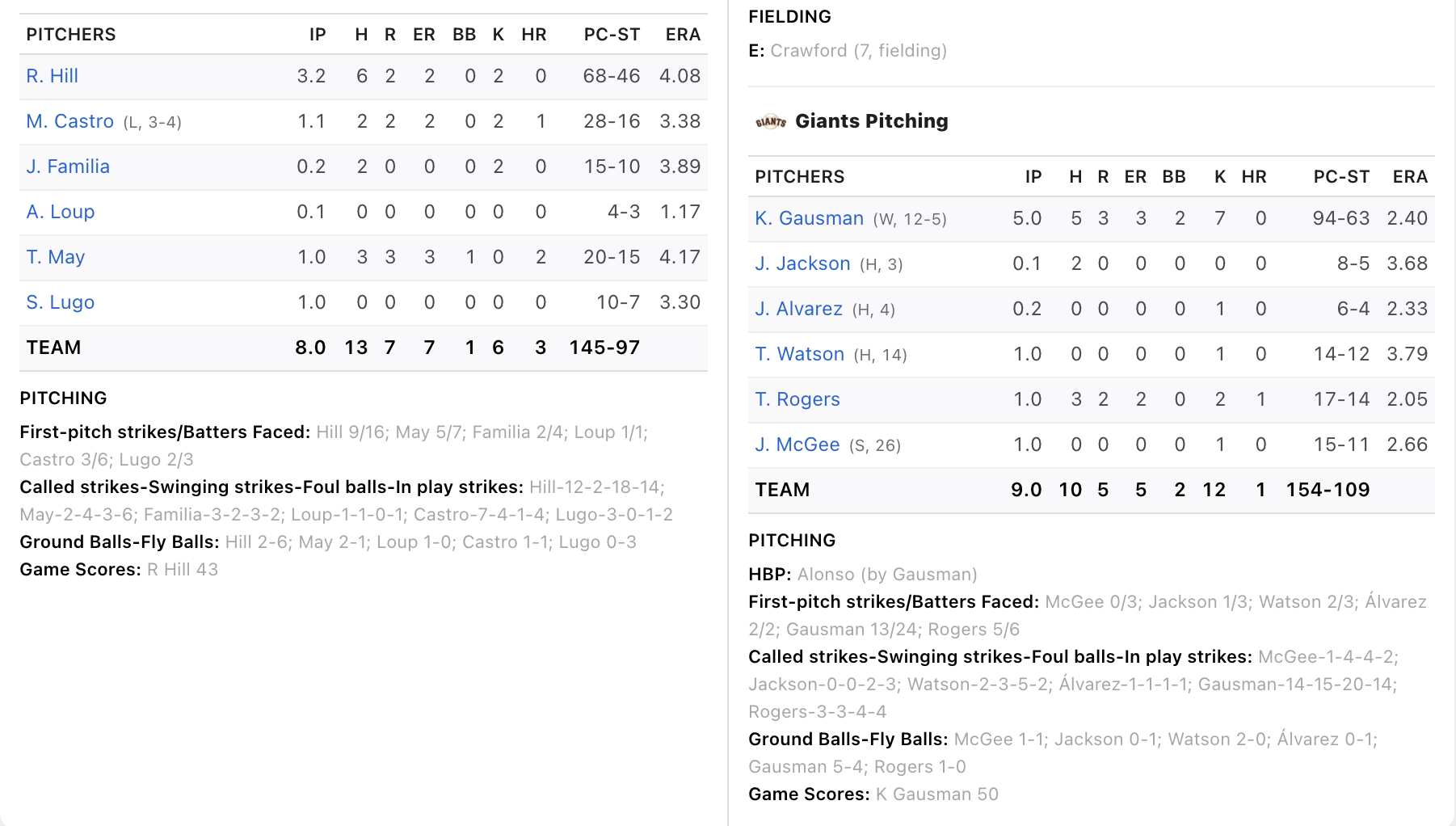 Since the Bums also won the Giants remained four games atop the National League West Standings. With the victory San Francisco has won sixteen of its last twenty-one games. Wow! Put that in your pipe and smoke it MLB Power Rankings Journalists…