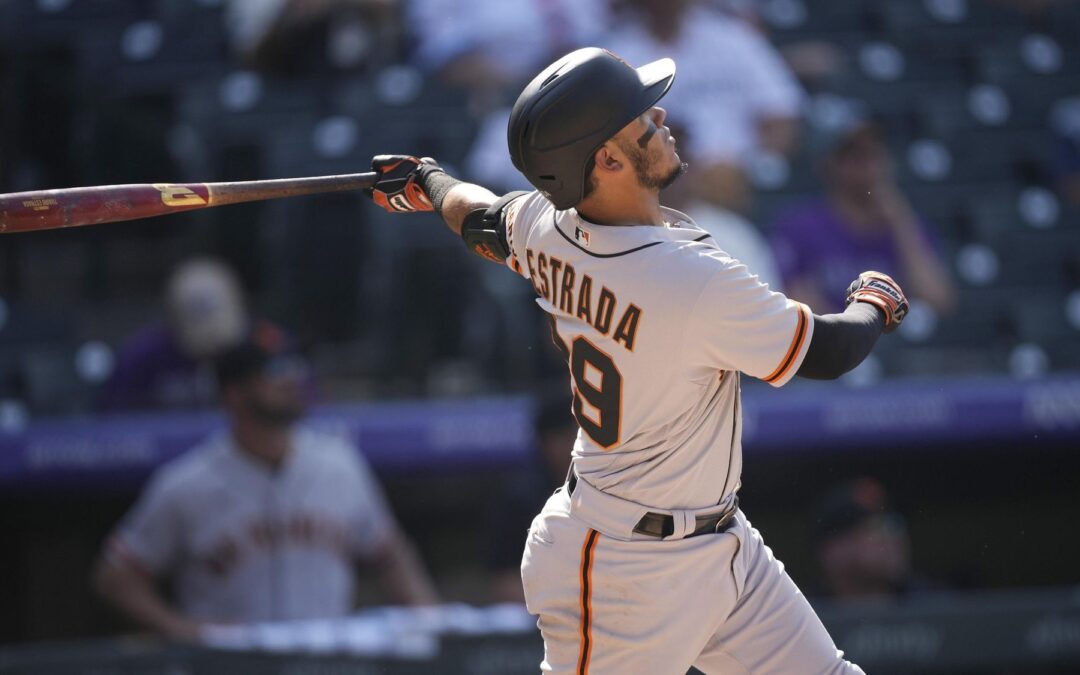 Yesterday, in their 10-5 (it was not that close) win over the Coloradans the Giants hit four home runs (Estrada with two, Buster and Ruf). They accomplished this feat for the 13th time this season and tied a franchise record (1954 New York Giants).

When they Giants were not going deep they were hitting doubles and singles, It was the kind of game where even Kevin Gausman hit an RBI single on a butcher boy play in which he faked a bunt with a drawn in infield and the ball was hit just past Rockies third baseman Ryam McMahon (Arenado would have had it).

This bluffed bunt, RBI single from Kevin Gausman is a work of art 🎨 pic.twitter.com/AAIUndgTiR

Kevin Gausman, by the way, gets the first game ball. His seven innings of work allowing only three runs on one walk and ten strikeouts could be described as dominant. In Denver, going seven and giving up three is the equivalent of going eight or nine and allowing one or two in other Major League ballparks.

“I wanted to go at least seven; that was the goal going in. I almost talked to Kap before the game, ‘Let me go 130 pitches, whatever it takes. These guys need a day off.’ I had some quick innings, some long (at-bats) and then followed by a one-pitch out.”

Gausman ruled the day mostly with fastballs from 94-96 MPH up in the zone, generally high enough not to be dangerous but close enough to look hittable. There is an art to throwing that pitch because if it is too high it will be a take and a ball. If the pitch is belly high or stomach high it will end up over the fence. Gausman threw pitches around the letters or just below and the aggressive Denverites mostly swung and missed when they were no hitting harmless pop ups and short fly balls.

Gausman put on a clinic with the high heat since the Mile High altitude plays havoc with all kinds of breaking pitches. It appeared the Giant righty threw about 80% heat and 20% whatever to keep the Rockies batters honest. Maybe it is safe to call him Ace 1 again. He was very sharp. He was confident and he set the tone in the game for the Giants after his team scored in the top of the first thanks to Darin Ruf’s homer to left on the third pitch of the game and Buster’s opposite field blast that was simply smoked (Boy oh Boy does Buster Posey have opposite field power or what!!!).

The win for Kevin Gausman was especially poignant since it came in his hometown before many members of his family and many friends. It was his first time pitching in Denver after a snow out, a pandemic, and other weird tales of fate kept him from toeing the rubber in Denver.

My vote for second game. ball goes to Thairo Estrada who is having himself a week. Yesterday he hit two home runs, the second of which sailed along the left field line as if it was launched from a secret installation deep in Kansas. It was a bomb that came on an easy swing off a curve-slider in. In all, Estrada would end up 3-5 with three RIBEYES and two runs scored while playing his usual sterling second base. He may end up being the steal of the year if he keeps this up. I could see his power bat from the right side being a big part of the Giant future at second base.

Mauricio Dubon had a fantastic game as well going 3-5 with two runs batted in and looking very confident at the plate while in the line up to play center field. The Giants would finish the day with fifteen hits in all.

Steven Duggar had two knocks and a run scored playing left field. Now, I have no idea why Duggar was playing left and Dubon was in center. I would think with his experience and skills Duggar needs to be in center and Dubon anywhere else. Somebody please ask Gabe why he positioned his players this way.

But the story of the game, apart from Gausman’s excellent outing resulting in his 13th win, was the homers:

One important note about this game: The Giants arrived in Denver around 1:30 AM local time after playing an intense and draining series in San Francisco against their rivals. To come to the park and put ten on the board while Gausman was dominant makes for a very nice start to the road trip. Kudos to our boys of summer. Kris Bryant made another throwing error and was removed from the game with wrist discomfort. No word on how serious the injury is. Yaz was scratched from the line up with stomach issues. According to Manager Gabe Kapler the Giant outfielder ate something that did not agree with him and was very sick though still able to pinch hit. There was also a scare on a pop up in the infield when Darin Ruf aggressively chased one caught by Buster and consequently knocked the Giant catcher out with a slide while trying grab the ball. Fortunately nobody was seriously hurt but it was a bit scaaawwweeee. Gabe Kapler was quoted as saying the Giants need to work on their communication on these plays.