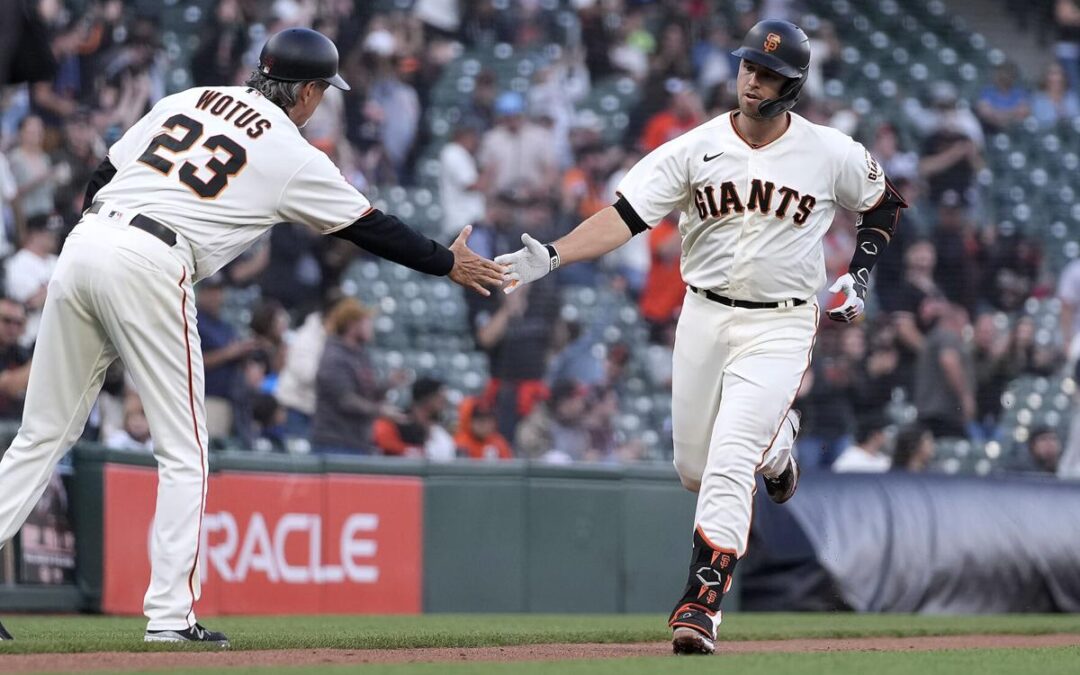 The Giants are well again. Remember all the harrumphing after the Nationals series just this past weekend? Yes, that series that saw them score three runs in four games (and still win two!)…. Last night Arizona started the game with two quick runs in the first inning off Anthony (don’t call me disco) Desclafani. Well, the Giants answered with a four-spot of their own in the bottom of the first thanks to a three-run homer by Buster Posey and the party was on. Steven Duggar and LaMonte Wade Jr. went deep in the bottom of the fourth as well. Wilmer Flores hit a two-run jack and BB9 connected for his 9th, both were in the bottom of the fifth inning.

Over the course of a season there will be games when your starter is not his sharpest or when your pen coughs up a few runs. Great teams win those games because of the bats picking up the slack. Yes, I am dealing in cliches today but it does not make what I am saying untrue. The Giants have now demonstrated the ability to bounce back from rough offensive patches with quick lightning strikes of runs.

Last night our boys of San Francisco summer hit five home runs to give them 99 on the season, four behind Toronto for the Major League lead. They are tied with Minnesota for second. Now, generally I could not care less about team homers. Remember the 2012 Giants? They hit the fewest homers of any team in baseball and ended up winning the World Series.

There are many ways to score a run but this year’s Giants team seems to have a knack for the big home run, not the garbage time long ball that pads stats when games are out of reach.

Last night the Giants won 13-7 over Arizona thanks to a power display and another solid outing by the aforementioned Desclafani. In the process, the Diamondbacks tied the Major League record for consecutive road losses at 22.

Here are all five Giant Long Balls. My thanks to the San Francisco Twitter person for putting them all together in one tweet.

There are many reasons why this is turning out to be a very special season for the Giants. The first thing I would list is expectations. Coming into 2021 nobody realistically expected this team to be on top of the NL West standings at any point in the season, let alone after 70 games. It is still early and many terrible things could still happen but let me count the ways in which this team has enchanted us this season.

First and foremost I would argue the resurgent play of Buster, BCraw, Longoria and BB9 that (old) core of Veterans has been nothing short of revelatory. Without question each of the four is having his best season in years and the pattern is too strong for it to be a flukey thing. I think credit must be given to Gabe Kapler and his staff on the teaching and development taking place every day at the Major League level. I have read many interviews in the past regarding the approach of Bruce Bochy and his staff regarding game prep, stats analysis and other factors employed by many teams today. It was basically a “let them play” philosophy that had little day to day emphasis on skill sets and analytics. There is a big difference with this current regime and so far the results are simply phenomenal. Count me in as a fan who though the above players were basically playing down to the end of their careers and were below replacement level. Boy was I wrong!

It makes me wonder what effect the psychology of a new regime and the positive nature of winning have on performance by veterans. Clearly they are factors and clearly they could not be measured.

Second, the starting pitching so far is nothing short of scintillating. What the Giants staff, including Farhan Zaidi have done with acquisitions and timely signings of guys like Alex Wood and Anthony Desclafani has been very special. The ability to keep them fresh with shorter outings and the ability to keep them healthy have all been huge factors in the Giants success so far.

Lastly, the Giants are getting high quality contributions from many players who spend or have spent significant time in Sacramento. Players like Steven Duggar and LaMonte Wade Jr. have had major contributions already in a short amount of time this season. This was not the case in the past when the Giants were lucky to get any help from the farm after injuries to key players for the better part of 2014 to 2018, with a few exceptions.

The Giants look to help the Diamondbacks set a Major League record for consecutive road losses today with Kevin Gausman on the mound against Zac Gallen of Arizona. Game time is 12:45 PM, Willie Mays Field time.