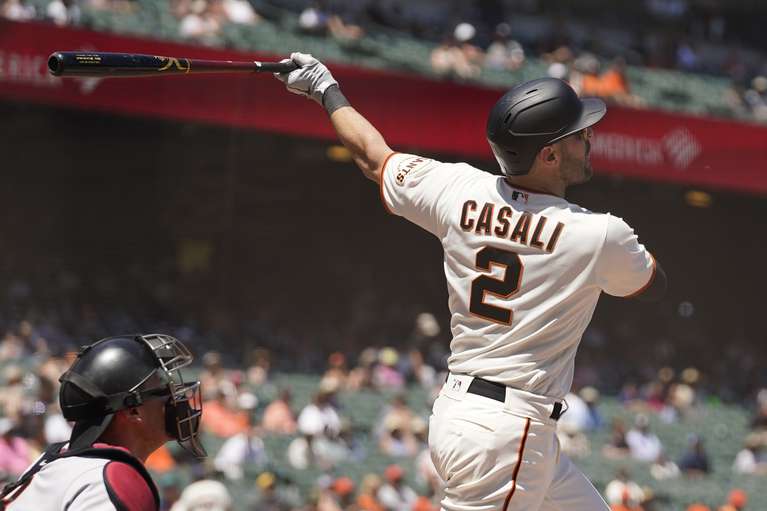 We all know the day: getaway game for the road team, day game, Buster is resting, BCraw is resting, and the Manager basically puts out a much weaker lineup. Bruce Bochy did it. Gabe Kapler does it. Yesterday was not that day because the Giants smashed the Arizona Diamondbacks into the record books, giving them their 23rd straight road loss in a 10-3 Giants win that saw the bottom of the order do most of the damage on a day when Buster and BCraw were resting.

It is called playing with house money.

Curt Casali had himself a week, including the first big blow, a two-run homer to deep left center in the bottom of the first inning. Mauricio Dubon followed that a couple batters later with a clutch two-out single on a decent curve ball by Diamondback starter Zack Gallen.

Dubon would also double, on an inside corner fastball in the bottom of the fourth inning and knock in a run on the process. That run was none other than Steven Duggar who scampered or should I say “flew” from first on the Dubon double down the left field line that was played cleanly by the Diamondbacks. I mention it because it was the combination of Duggar’s speed and excellent baserunning instincts that brought him home. Few Major Leaguers score on that hit. Duggar did.

The Dubon-Duggar combo brings a great deal of athleticism and speed to the Giants defense and offense both. It paid big dividends yesterday. Duggar would himself hit an RBI double in the 7th. Casali later had a charitable DBacks special triple when Josh Reddick and his center fielding teammate decided they wanted nothing to do with Casali’s deep fly ball. It was cute.

The Giants 6, 7, 8 hitters (Casli, Duggar and Dubon) went a combined 8-12 with seven runs batted in and four runs scored. Not to shabby for the bottom of the order. It is not exactly like Zack Gallen, who was making his first start off the disabled list, was throwing meatballs either. He had a firm fastball and a big curve that often creates havoc for righties. Yesterday he was not very shap however and the combination of that wildness and excellent Giants plate discipline, particularly from Dubon, Yaz and Duggar made the Giants site on pitches they wanted. When they got them, they hit them hard.

The add on runs are huge for a team that does not have a lights out bullpen (more cliches but you get the idea). For the Giants, they are part of the recipe for victory. Yesterday was a very good example. The Giants scored at least one run in six of the eight innings in which they batted. That is simply impressive, I do not care who is pitching.

Now, let us turn our attention towards Sir Kevin Gausman. Yesterday the Giants ace was in ace form, getting zeroes for the first six innings in only 68 pitches. He was approaching that wonderful outing called a Maddux (a complete game shutout in under 100 pitches). A slightly awkward 7th ended that possibility and an error by Dubon did not help but overall Gausman was dominant particularly with his fastball, which, as Mike Krukow noted, he was using a bit more than usual. The Gausman fastball was riding and waving in and out between 94-96. In many situations, Gausman was simply challenging Diamondback hitters and they failed, popping up or flying out on hard stuff up and down the middle. The reason of course is that they had to be wary of the splitter, the Gausman Kill Pitch. In the end the Giant ace went eight innings and allowed two runs on four hits.

It was a great day all around.

This was one of the few games I was able to watch live and what most impressed me was the plate discipline of the GIants hitters. What do I mean by that? Well, let us say that when a hitter is looking for a pitch, he does not chase if it is not his pitch. It also means he does not chase if his pitch is outside the zone. He waits for his pitches in his spots. With a rusty and powerful pitcher like Gallen, my guess is the scouting report was to make him work and come in with hittable pitches because he is likely to fall behind in counts. I would also surmise the Giants were told to look for his off-speed stuff which has a tendency to grab a bit too much altitude. The Giants hitting attack was ready.

I could write much more about how great Gausman was, how awesome the Giants hitting attack was in this series but then I would end up with typing fatigue. That is how great the Giants have been in the past four games. Our boys scored 37 runs in the four game set.

Here is the Casali homer, his first as a Giant.

Editor’s Note
Yesterday I wrote the Giants had acquired Rich Hill. The error has been corrected. I was just checking to see if anyone would notice. I intended to write Alex Wood.

The Phitin’ Phillies come to town for three. The First game is tonight at 7:05 PM, Willie Mays Field time. It will be Vince Velasquez against Johnnie Cueto. Please note all three games of this series will be on the Peacock TV network, whatever that is. The games are available for free online and on mobile devices. From what I understand the network is available in most northern California households as well.