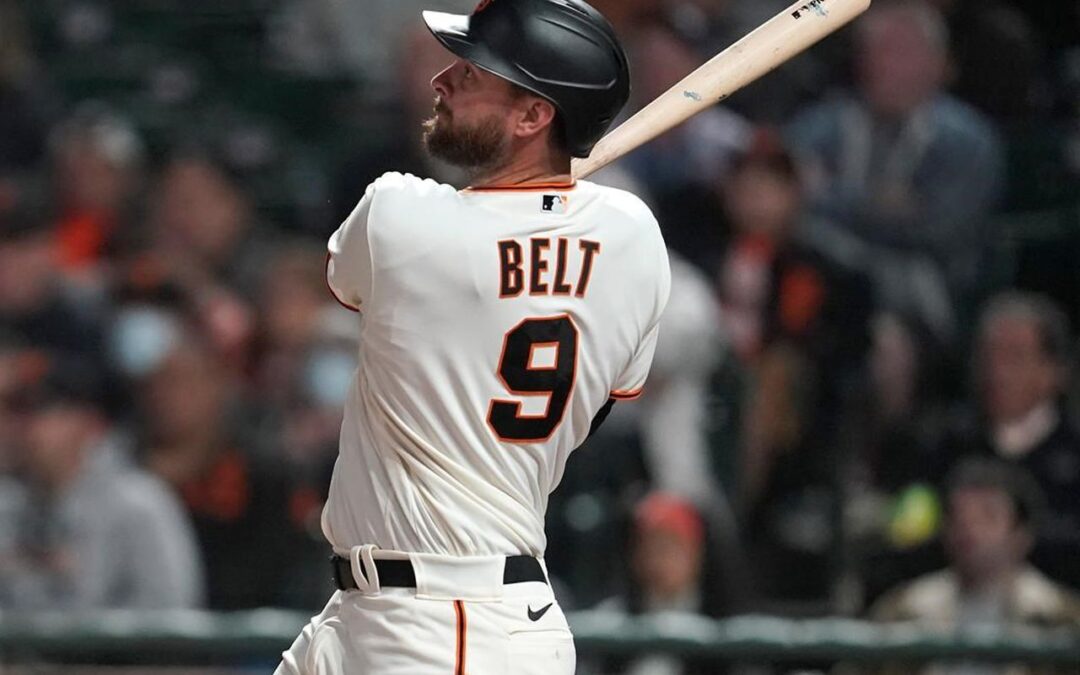 After the game it was champagne time.

“I forgot how much this burns to get in your eyes, but it burns so good. We absolutely love it.”
-Brandon Belt

The Giants mashed again in thumping the sad sack Padres of San Diego 9-1 in the first of a four-game series and the return to San Francisco after an undefeated road trip. Last night’s win was the eighth in a row for the San Franciscans and their longest winning streak of the season, matching a seven game ride in 2016.

How it started: How it’s going: pic.twitter.com/8YFZLFGfMu

In the game the Giants had “only” eight hits but boy did our boys make them count! The festivities began with a five-run first inning that basically decided the game. Tommy LaStella hit a solo homer to lead off the bottom of the first (on the fourth pitch) and LaMonte Wade Jr. hit a triple to drive in a run. But the big blow in that initial frame came off the bat of Evan Longoria in the form of a three-run homer.

That five spot spelled doom for Yu Darvish, the mercurial right hander with the curveball magic and the consistency of a firefly’s flight in July. You just never know what is going to happen when he takes the mound.

To add to the home run show Mike Yastrezmski hit a bomb to right center field, his 23rd, that easily cleared the fence and went at least 440 feet if it went an inch.

My favorite homer of the night however came off the bat of Captain Brandon Belt. His two-run moonshot in the bottom of the fourth was majestic both for the flight path of the ball (that risked taking out a few sea gulls) and the way the big first baseman reacted when he hit what he knew was a big boy blast: bat dropped, head down, run the bases and act like you have been there before. A video of that sequence should be required viewing for all rookies in the Big Leagues at Spring Training.

For Whom the Belt Tolls pic.twitter.com/5q6NA9aBHv

The blast was Belt’s 24th in a season that could be described has the best in his career.

Dominic Leone pitched the first two innings and got the win. Since this was another bullpen game the Giants were able to take the pressure off each reliever by scoring early. Scoring first has been one of the secret ingredients in the magical formula of this magical season for San Francisco.

Regarding these games started by the relief corps I think it would be prudent to state the obvious now: The Giants brain trust of Zaidi and Kapler have been absolutely golden in their use of the bullpen games with the injuries to Alex Wood and Johnny Cueto. It helps that the Giants have a set of reliable and effective arms in a seemingly endless parade of lefty and right matchups. Last night after Leone it was Garcia, Alvarez, Littel and Doval before Rookie Kervin Castro pitched the final two innings putting up zeroes in both and allowing two hits.

In Zaidi and Kapler we trust.

With the win the Giants retain their 2.5 game lead over the team in Southern California. With 18 games left to play the Giants need only go 9-9 to reach 103 wins. If they do, their rivals in Hollywood would need to go 11-6 to tie the Giants and 12-5 to get 104 wins.

The National League West title is the next step in the road to a ring.

“You have quite a few World Series champions in that room and people who understand that this is one step in the direction that we want to go, but not the ultimate goal.”
-Gabe Kapler

Recently, thanks to Evan Longoria’s smoking hot streak since returning from the Injured List, I have been thinking about the trade that brought him to the Giants in 2017. If you recall the Rays sent Longoria to the Giants for Matt Krooks, Stephen Woods, Christian Arroyo, and Denard Span. Looking back I believe it is fair to say the Giants absolutely won that trade. At the time, I was elated since I had been following Longoria’s career as a Ray when I was living in Florida and was able to watch a steady diet of Rays games. Then in 2018 the gold glove third baseman had the worst season of his career. After a few seasons that looked promising but were interrupted with injuries, including 2021, Longoria is proving to be a very valuable piece of the Giants offensive attack and a steady component of their infield.

In game two of the series it will be Anthony Desclafani going for his 12th win. He will face Jake Arrieta, a pitcher everybody loves to hate. First pitch is at 6:45 PM, Willie Mays Field time.