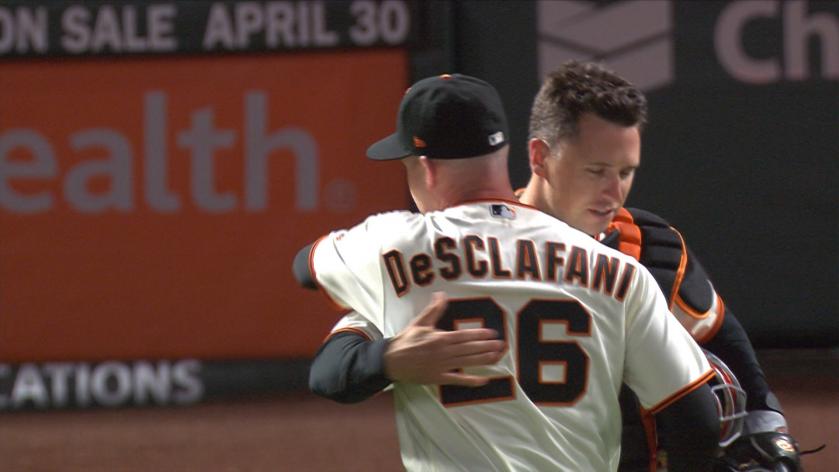 Ok. It’s official! The Giants are now THE story of this young Major League Baseball season. With last night’s 12-0 stomping of the Colorado Rockies the Giants are now 15-8, tied for first place (with the Bums) in the National League West, and tied for the most wins in the Major Leagues. The Royals have the best winning percentage/record at 14-7. The Giants starting pitching staff has an ERA of 2.11, the best in baseball. Last night Buster Posey went 4-5 with a home run and three runs batted in. He was a line drive machine channeling Buster circa 2012, the MVP Buster that is.

Oh… and Anthony Desclafani nearly pitched a Maddux (Complete game shutout with less than 100 pitches) going nine and striking out nine with one walk and three hits in a complete game gem that saw him throw 100 pitches. It was, as Giants Manager Gabe Kapler said, pretty much a perfect night for our boys of Summer. It was Disco’s second career shutout and first since 2016 while a Red.

Now back to Buster: Posey has five home runs in April. Last night’s bomb came from a 95 mph high fastball on the outer third of the plate. Watch Buster’s easy and quick stroke, flat to the ball and supplying all the power to go over the center field wall. It was a very impressive piece of hitting:

It must be said that with Buster and Curt Casali, the Giants have quite the catcher’s duo, an incredible point of strength for a team that suffered greatly from a lack of defense and hitting in the catcher’s sport last season. One could easily make the argument that the difference between making the postseason and staying home in 2020 came down to this difference.

Finally, a word must be said about the astounding performances of the starting staff so far in 2021. Credit must be given to the catchers, the improved play of the defense, particularly the infield (there are still issues with the outfield defense in center and left), and to Farhan Zaidi for his signings of Disco, Gausman, Sanchez and Alex Wood (who may be the gem of the staff by the time the season is over). This renaissance of pitching with the four top starters, each of whom is on a one-year contract, makes for some intrigue when the trade deadline comes around. If the Giants are still flirting with the best record in the Major Leagues in July, well then… I would not want to be the one to make those decisions regarding trading for the future or staying pat to win this year.

In what sounds like a great salsa party in the making it’s Chi Chi Gonzalez of Colorado against Aaron Sanchez for the Giants. First pitch is at 6:45 PM.