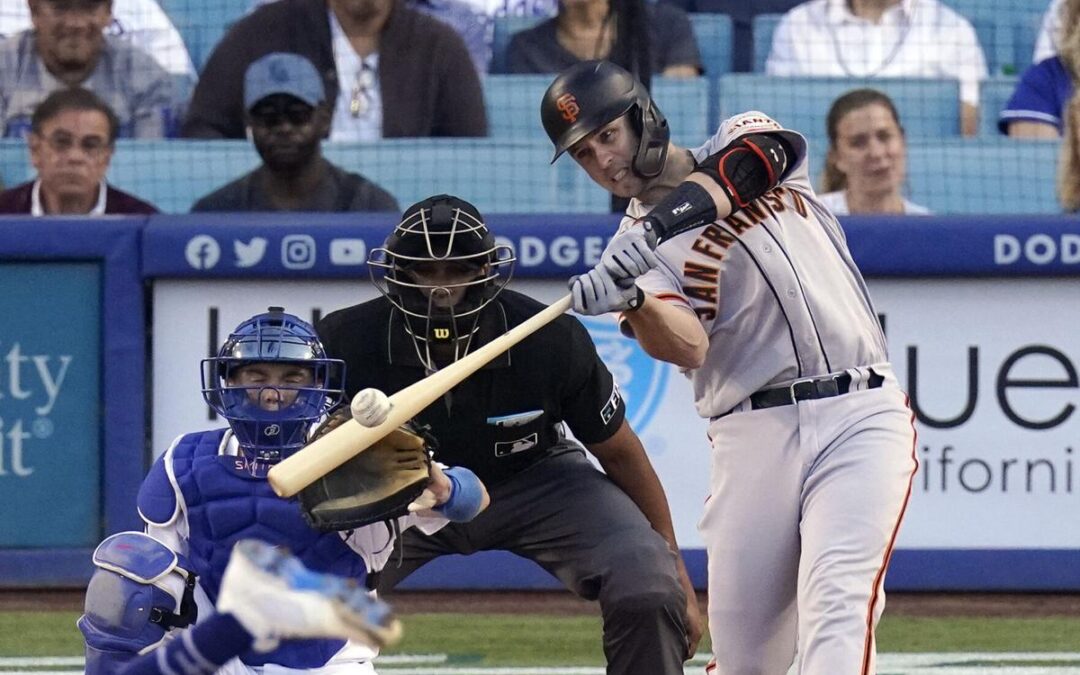 Buster, boy are you a sight for sore eyes.

The Giants opened their four-game series in Los Angeles against the Bums with a tense 7-2 victory thanks to back to back long balls from Buster Posey and Wilmer Flores in the top of the first to set the tone of the game. A hugely big four-run seventh inning blew the game open. Until Austin Thairo Estrada’s two-run double with two outs in the top of the 7th inning the Giants were 1-9 with runners in scoring position. Austin Slater would later laser a double down the right field line to add another run in an inning where the scoring started with Jason Vosler’s bases load sac fly to deep right that was not far from being a grand slam.

Kevin Gausman had a very weird outing in which he labored through three innings and allowed two solo homers in the bottom of the first. He was pulled after throwing 80 pitches but the Giants bullpen on this night got the job done with six shutout innings. The Dodgers had only two swing and misses on Gausman’s super splitter, a very strange and troubling stat that suggest the Los Angelinos knew what was coming on every pitch. Either Gausman is tipping his pitching or the Dodgers are finding creative ways to get a read on the pitches. In either case it is a disturbing thought, if true.

Kevin Gausman would later give praise to the Giants hitting attack on this night:

“They really picked me up right there. To come in and shut down that lineup, especially the way they were swinging it, was impressive,” Gausman said about the San Francisco bullpen. “That was the reason why we won the game.”

The law firm of Littel, Garcia (the winning pitchter), Leone Jackson and McGee were the unsung heroes on this night. This was a crucial win to remove the bad taste from the frustrations in St. Louis and to get the opener of a crucial series. Thanks to the victory the Giants have a two-game lead in the NL West over their Hollywood rivals.

In fact, the Giants bullpen has been flat out superb for the better half of the past two months. They got their phalanges straightened out according to Zack Littel;

Zack Littell dropped “phalanges” into his Zoom press conference three times, a new MLB record. His description of the bullpen’s night: “We got our phalanges stretched out and all that. We’re just ready to get after it.”

Max Muncie continues to hurt the Giants. In last night’s game he homered again in the bottom of the first. What irks me most is not even the homer. It’s how comfortable he looks in the box against the Giants. It’s his preening. He needs to pay. The Giants need to find a way to make him uncomfortable again. A little chin music perhaps? Something to get the feet moving? Something to plant a seed of doubt? Either that or walk the SOB. This year he has owned the Giants and it is getting ridiculous, quite frankly.

The good news of Buster Posey’s return was tempered slightly by the very bad news of Brandon Crawford’s trip to the 10-day Injured List because of his oblique strain suffered in St. Louis.

Here is the Posey home run, a thing of beauty that was bashed with exquisite violence. It came on a hanging curve-slider high and tight. It is a virtuoso feat to keep this pitch fair and out of the yard.

Come for the Buster homer in his first at-bat, stay for Wilmer going back-to-back. pic.twitter.com/dGZyprEISx

In tonight’s game Alex Wood takes the mound for the Giants. The Dodgers, in their typical Bush League gamesmanship, have not yet announced a starter. Cute.