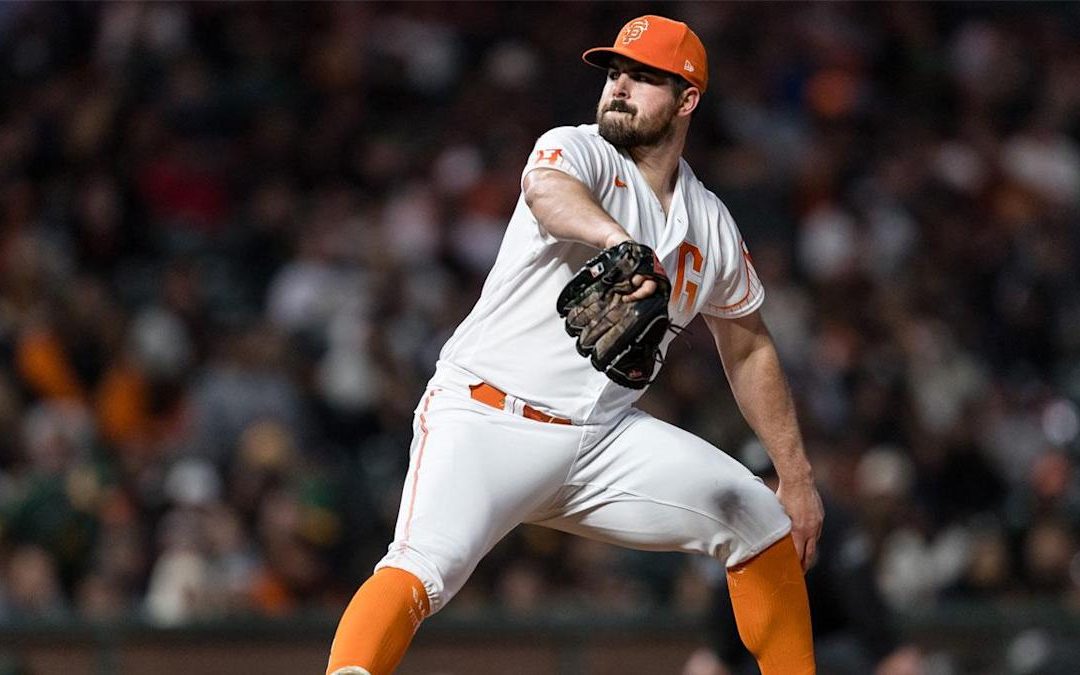 Carlos Rodon was his usual ferocious self as he and the Giants tamed the Detroit Tigers 4-3 in a game that was scrappy and full of highlights. Yaz threw out Javier Baz at second after the Tiger shortstop hit a bullet off the right field wall thinking he was going to cruise into second for a double. Nope!

Carlos Rodon mixed heaters and sliders to silence the Detroiters, allowing only one run in six innings with seven hits allowed and four strikeouts recorded. He did not walk anyone, perhaps his most impressive stat of the outing. Sporting the Creamsickle City Connect uniform with no undershirt and his jersey not buttoned to the top Rodon did his best Burt Reynolds in 1977 impersonation on the mound: He was manly. He was focused. He was committed.

The Giants need to trade Carlos Rodon at the deadline for a barrel full of top prospects. You heard it here first. That’s what I am doing if I’m Farhan Zaidi. I acknowledge that he is probably my best fungible asset and I pull that trade off well before the deadline to maximize the return. Then I tell Giants fans to be patient for a year or so while those seeds planted down in Sacto and San Jose, Richmond and wherever, grow into big, tall, beefy baseball champions. It could happen. It would be the right move.

The Giants started off strong in yesterday’s game, jumping out to a 4-zip lead thanks to some clutch hitting by Evan Longoria (two-run single) and Mike Yastrzemski (two-run single). The Longoria ribeyes came in the bottom of the first inning when Slater struck out to start the inning but Wilmer Flores walked. Then Joc Pederson hit a soft grounder down the third base line that became a double since the shift was on and there was no player to be found in San Francisco County. It was the second time in a week or so that Pederson had beaten the shift in such a manner. It was beautiful. I wonder if the Giants lefties are working on it because I see Crawford, Yaz and Pederson going opposite field more and more. If so, it is another example of the Giants coaching staff making the team better and maximizing its talent. Bravo.

After Pederson’s double Ruf grounded into a fielder’s choice to set up Longoria’s hit.

It came off the end of the bat on a slider or curve by Tiger starter Skubal,  slow dying liner to center that was reminiscent of Marco Scutaro’s glorious single in 2012.

Back to last night’s game: The Longoria knock drove in two and the Giants had a lead with their Lefty ace on the mound. Nice way to begin the evening.

In the bottom of the fifth inning that Giants added two from Yaz’s single when Ruf walked and Longoria reached on an infield single. A wild pitch moved the runners over and allowed them to score on the Yaz single to center.

The wild pitch was a key play in the game because the Tigers would make it a ball game when they scored a run in the top of the sixth on a shift-beating RBI single by Miguel Cabrera down the first base line off John Brebbia. In the top of the seventh Candelaria would hit a ground-rule double to knock in Castro and suddenly it’s a 4-2 game. The hit went to deep right center and just barely eluded the grasp of Yaz who ran about thre.five miles to track it down. It was a clooooose play.

Castro hit an RBI single of Dominic Leone in the top of the 8th to make the game a nail-biter. The tigers were rallying with the bases loaded in the same inning and two outs when Gabe Kapler summoned Camilo Doval to the mound to make a rare 8th inning relief appearance. The Giants were hanging for dear life with the Tigers roaring and braying, swaying and in a foul mood. That’s when Camilo ended the threat and the inning with a 1-2 slider so far off the plate that Jonathan Schoop would not have been able to hit it with a gondola oar.

It was huge. The crowd roared and Doval shut the Tigers down in the top of the ninth inducing a game-ending double play.

Game Over. Giants win. We needed that.

The Giants and Tigers close out the series with a day game at 12:45 PM at Willie Mays Field. Rony Garcia and Alex Wood are the starters scheduled.