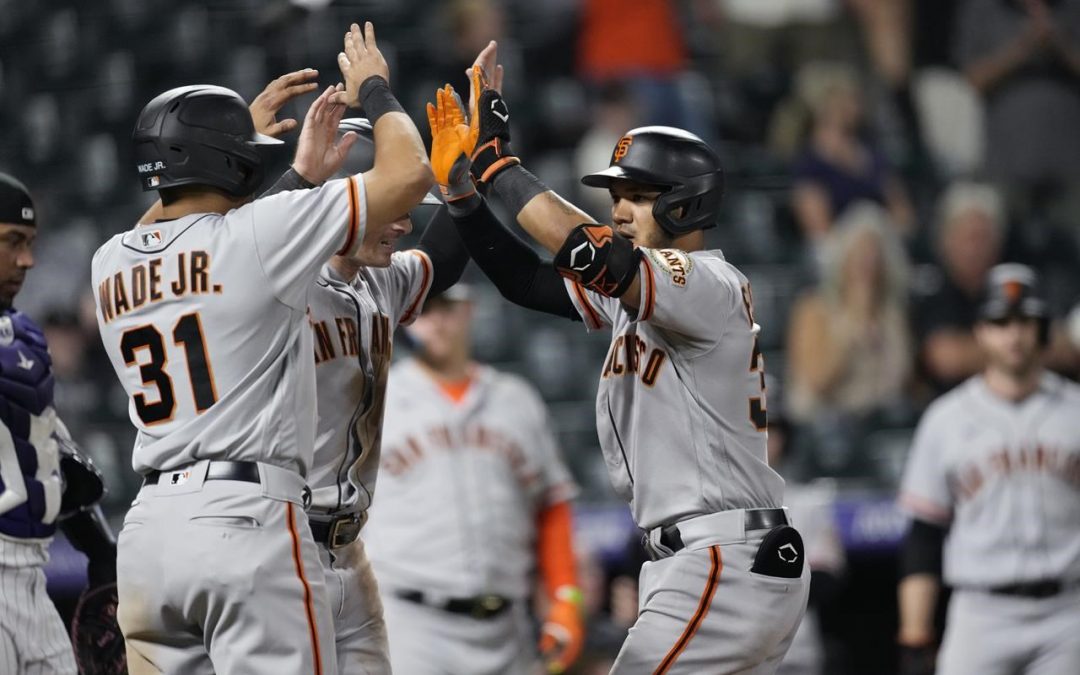 Thairo Estrada hit a three-run home run with two outs in the top of the tenth to make a 7-7 game 10-7. The Giants would hold on and win a game in which they fell behind by the score of 4-1 and 6-2 earlier in the game. Estrada not only won the game in the tenth with his laser to left on an inside fastball, he also doubled to lead off the ninth inning when the Giants were trailing 7-5. The boys would score two in that frame to even the game up and set the stage for the second baseman’s offensive heroics one inning later.

Estrada would end up with three of the Giants fifteen hits in the game. Wilmer also had three hits as Villar and Yaz each had two.

In that exciting ninth David Villar tied the game with a slicing double after Wilmer Flores singled in Estrada.

Memo to Gabe Kapler: Thairo Estrada should not be platooned.

The young righty is under team control for another four years and stands as one of Farhan Zaidi’s best acquisitions, if not his best, when it comes to everyday players. Estrada is now batting .266 and his fourteen homers. More importantly, Thairo has demonstrated the knack for the big knock.

Earlier in the game Yaz hit a deep homer to center. It’s good to see his power back.

Here is the Thairo Homer:

Camilo Doval earned the win and Scott Alexander picked up his second save of the year.

Brandon Crawford did this:

In other words, it was ugly. But looking at replays of the hits that produced runs three came from sliders and fastballs at the knees and on the black. In other words, the kid made some decent pitches and the Rockies went up the middle and the other way with them. Junis was actually better than his results. The Rockies hitters had an excellent game plan and put it into effect. Luckly for the Giants, Chad Kuhl had a rough outing too. He allowed five runs in four plus innings. The Giants offense woke up in time to bail out Junis. It was much needed after the disappointing weekend series about which I will not say any more.

In the game the Giants overcame four errors (two from Villar on the same play) that lead to two unearned runs. When you hit you can make up for shoddy defense.

Carlos Rodon will skip a start because of his chronic blister issue. It’s a good and safe move. GG approves. Austin Slater was reinstated after a short stint on the Injured List.

It was announced yesterday that the Detroit Tigers hired Giants “GM” Scott Harris as their new President of Baseball Operations. It’s not exactly clear to me what Harris’s role was with the Giants but good luck to him. It says something that another organization is now hiring away our front office. I put the “GM” in quotes because, frankly, everybody knows that’s mostly a ceremonial title and the President of Baseball Operations (Farhan Zaidi for the Giants) makes the real personnel decisions and draft choices.

This is a quote from the MLB Trade Rumors article:

The Giants, under Harris and Zaidi, developed a reputation as one of the best teams in baseball (if not the best team) at revitalizing the careers of pitchers. Kevin Gausman, Anthony DeSclafani, Alex Wood, Drew Smyly, Tyler Anderson and Jakob Junis are just some of the names who’ve gone to San Francisco in the past few years and significantly improved their stock.

There you have it.

The Giants take on the Rockies at 6:40 PM local time. San Francisco has not announced a starting pitcher since Rodon will miss his turn in the rotation. The Rockies will send Kyle Freeland to the hill.