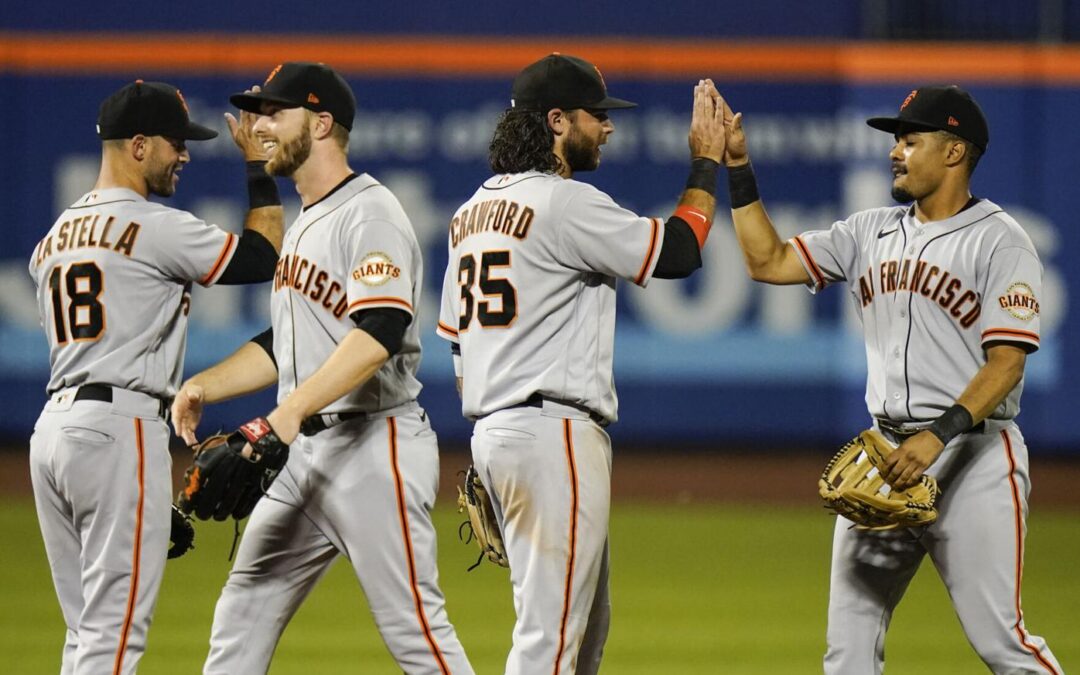 God bless you Jon Miller. For the second straight day our headline is taken from the lips of the Giants magnetic, majestic and downright brilliant broadcaster. “Crawford Whacks One!” That’s right. He did. The Giant shortstop drove in two runs with a double in the top of the 7th off Met reliever Aaron Loup. It was the first pitch Mr. Loup, a lefty, threw against BCraw and number 38 was ready for it. It was a slider belt high on the inside half of the plate and it was whacked something fierce. BCraw’s knock was a thing of beauty for many reasons, chief among them being the fact that the Giants were losing 2-1 at the time in a game that saw them more or less dominated by Met starter Taijuan Walker who was pulled with no outs in the top of the seventh and after throwing only 74 pitches.

The Met Manager, Luis Rojas played it by the book (i.e. panicking when your starter gets into a spot of trouble in a tight game in the seventh or later). Never mind that the jam was created in part by Met infielder Johathan Villar who booted Kris Bryant’s ball to lead off the inning.

I love the Crawford hit for another reason: It came off a lefty! I love it when these by the book Managers who make moves seemingly out of logic when they are more out of touch with the flow of the game and then said “metrics” moves backfire on them! See the Dodgers and Dave Roberts in the 2017 World Series.

To preserve the lead the Giants had to endure a nervy ninth where the Metropolitans had the bases load with two outs and Pete Alonso up against Jake McGee. By most metrics this was not a good match up for the Giants but McGee would enduce a pop up by the New York slugger to end the game. The ninth started with a Villar single and absolute mess of outfield play by Slater and Dickerson when a routine fly ball was “dropped” and the Mets were rallying. It could have been ugly loss, particularly since earlier in the game Johnny Cueto’s outing was marred only by a Kris Bryant throwing error that brought in the lone Mets run.

Fortunately Bryant would atone for his error with an absolute bomb to the second deck over the left field wall of Mookie Wilson Field. It was a serious blast that could easily have taken someone’s eye out had it not hit the facade of the stadium. Watch it on a loop for an hour and you still will not get bored. It brought back memories of Buster Posey’s grand slam in game 5 of the 2012 NLDS in Cincy.

Johnny Cueto returned from a stint on the IL and pitched well enough to win allowing only five hits and the lone run. I for one, was encouraged by his start and hopefully the Dreadlocked Dandy can stay healthy down the stretch as the season comes to a close.

With the win the Giants clinched at least a winning record in 2021 for the first time since 2016 (that is a long time ago). But our boys have their eyes on a bigger prize and the win allowed them to stay 2.5 games ahead of the Hollywood Baseball Club since the Bums were able to outlast the Padres in a joke of a baseball game in sixteen innings. The Padres looked a bit cooked. Stick a fork in them, they’re done.

It will be Alex Wood vs Carlos Carrasco in the series finale tonight at 7:10 PM, Ron Swoboda time.